The first significant group of Germans arrive from the Prussian province of Brandenburg on 16 November 1838.
1886

The German Association was founded by urban class-conscious immigrants.
1914

Beginning of the First World War caused a suspicion towards people with a German background.
1939

The beginning of the Second World War created a suspicion towards people with a German background.

Although no longer comprising one in ten South Australians, as they did until the First World War the German born and their descendants continue to play a distinctively large role in South Australia.

The first significant group of Germans arrived in 1838. These ‘Old Lutherans’ from the Prussian province of Brandenburg sought to preserve their traditional faith by emigration, with the financial assistance of George Fife Angas. Subsequent arrivals did not necessarily share this religious motivation, but the Lutheran Church remained at the centre of life for Germans, especially in rural areas, well into the next century. Moravians and Wends (Sorbs) were gradually absorbed into the German-Lutheran community, but the few German Catholics and Jews who emigrated to South Australia in the nineteenth century quickly integrated into the mainstream.

By 1842 most of Pastor August Kavel’s flock had moved from the outskirts of Adelaide to the Barossa Valley. The settlements they established reproduced much of what they had known in Germany. Hahndorf in the Adelaide Hills, and Bethany (near Tanunda) were typical of the farmlet village (hufendorf), although Hahndorf later developed into a street village (strassendorf). Approximately one third of the Germans were farmers and another third were tradesmen, the remainder were miners, labourers and small businessmen, with a few pastors and professionals. Their towns were self-contained, for many years remaining socially closed communities. German farmers considered the land they worked as held in trust from God, to be passed on to future generations. Rather than cultivating a single cash crop, they practised mixed subsistence farming, which helped ensure their survival through hard times. South Australia’s pre-1914 German society was not homogeneous. Rural farming communities had little in common with the high culture and German language newspapers of Adelaide’s richer middle class and professional Germans, nor indeed with the vernacular culture of the artisans and labourers. The German Association, founded in 1886 by urban class-conscious immigrants, formed yet another group.

From the introduction of responsible government in 1857 until 1914, Germans were well represented in the South Australian parliament. Their main concerns were education, re-afforestation and farming. Although some British South Australians considered that there was a danger of the Germans developing a state within a state, they were readily accepted into the community. This changed with the outbreak of the First World War in 1914 when all persons of German background became suspect. As house arrest and internment were common, some of German descent changed their names or anglicised them. Sixty nine German place names were changed. All things German fell into disfavour and migration from Germany ceased. The Second World War again sharpened the paranoia against Germans, if not as strongly as in 1914.

Large post-Second World War German migration and new social attitudes revived the respect Germans and their descendants had previously enjoyed as hard working, frugal, reliable citizens. The Schützenfest was revived; the German Association flourished; and Germans again took a leading role in the musical, educational and business worlds of South Australia. Germans remain one of the largest groups of overseas born in the state, and their descendants the most numerous. The German influence in South Australia is again prominent. What was once just German has now become South Australian, as the Germans had always wished. 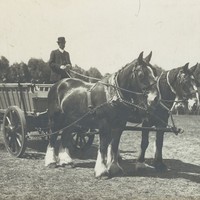 Image courtesy of the State Library of South Australia, SLSA: B 25888, Public Domain Image courtesy of the State Library of South Australia, SLSA: B 62414/1/39, Public Domain Image courtesy of the State Library of South Australia, SLSA: B 30468, Public Domain Image courtesy of the State Library of South Australia, SLSA: B 40893, Public Domain

Thanks for sharing Maggie, Ian's book is sure to be a goldmine of information. Happy reading.

My great great grandparents were Caroline (Lena) and Johann Harmstorf. Caroline arrived in Aust. on 20th October, 1882 aboard the 'Corona'. Johann had already arrived in Aust. I am trying to find out more info about Caroline and Johanns life before they left Germany. Can't wait to get hold of a copy of Ian's book (who is my direct relative)

A good point Kevin, this piece is only a short introduction, if you click on sources below the article some of the author Ian Harmstorf's more extensive publications are listed, I'm sure you'll find more there.

That's a fascinating history Heather, thanks for sharing.

My Great great grandfather Ulrich Hubbe was amongst Lutheran migrants around this time. Lawyer, teacher and linguist, he contributed to the drafting of the Torrens Act and his son, Captain Samuel Hubbe, served and died in the Boer War. Samuel is listed on the North Terrace monument while Ulrich rests in Haandorf. I was destined to move to the Adelaide Hills.

The piece misses out that many SA German sons enlisted in the AIF and died in France and the Middle East while their families were being mistreated back in Australia.

Cigler, M and I, Harmstorf, The Germans in Australia (Melbourne: AE Press, 1985)