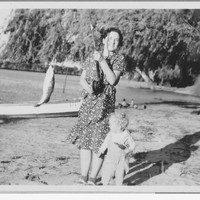 The Act was the first legislation to regulate fisheries, however, this Act and subsequent Acts failed to save the native oyster fishery, slowly destroyed by over-dredging and petering out by 1943.
1878

The Act, which controlled the size of nets and other means of catching marine scale and freshwater fish, began the gradual introduction of controls, culminating in this later period of intense management.

Especially in coastal and riverine areas, fishing has always played an important role in the cultural, material and social lives of Aboriginal peoples. During the early years of European colonisation a cutter fleet supplied much-needed food for the settlers, while other fishers, operating small sailing boats or using lines or nets from the shore, hawked their catch door-to-door. People also simply caught fish to feed themselves and their families.

Fishing and The Cutter Fleet in South Australia

The cutters, which sailed from Glenelg to Kangaroo Island and around Spencer Gulf, stayed out for about a week, until the well in the boat was full of fish (whiting for preference) or until supplies ran out. Their activities, and the exploits of the oyster fleet, which explored both gulfs and ventured as far west as Coffin Bay, were frequently reported in the Adelaide press. Sometimes these reports were of the loss of boats and lives, because, with no motors, no forecasts and, initially, no lighthouses or beacons, all were at the mercy of the weather, hazards such as Troubridge Shoal off the foot of the Yorke Peninsula, reefs especially around Althorpe Island, and dangerous passages such as that from Coffin Bay to Port Lincoln on the Eyre Peninsula.

The Native Oyster Fishery and Over-Fishing

The settlements of Stansbury (Yorke Peninsula) and Coffin Bay sprang up soon after the establishment of the colony around beds of native oysters, the fishers dredging for oysters under sail. The catch was sent to Adelaide, by fishing cutter or ketch, and sold from such venues as the Glenelg Hotel. However, the first legislation to regulate fisheries, the Oyster Fisheries Act 1853, and subsequent acts failed to save the native oyster fishery, slowly destroyed by over-dredging and petering out by 1943. This acted as a warning to South Australia, which has been recognised for its management policies since the 1950s. The Fisheries Act 1878, which controlled the size of nets and other means of catching marine scale and freshwater fish, began the gradual introduction of controls, culminating in this later period of intense management. The Act exempted Aboriginal peoples from taking fish for their own use. From 1904 a commercial fishing licence was required (available to anyone who paid the fee), and from 1917 recreational fishers were subject to some of the fisheries by-laws.

Guaranteed buyers and the means of getting the catch to market in wholesome condition, basic requirements for a viable industry, were aided by the coming of steamers and railways, plus the building of ice works and the advent of refrigeration. Through all these events twists the saga of the Adelaide Fish Market, a virtual monopoly from 1887 until 1954, when the fledgling South Australian Fishermen’s Co-operative Limited acquired the premises. After 1979 SAFCOL, as it was generally known, was gradually transformed from a fishers' cooperative, with little depots at places such as Streaky Bay, to an internationally owned company. Now the big markets for crustacea and tuna are overseas and the catch goes by air alive, refrigerated fresh or frozen, or by ship as frozen cargo.

Background of Fishers in South Australia

The early fishers were mostly English or Scottish, with the occasional Scandinavian left behind by an overseas windjammer. In the 1870s a few Greek fishers arrived, bringing with them ring nets; from 1885 Italian families brought their seine nets and from the 1950s Yugoslavs joined the industry.

Growth of the Industry and Fish Fishfarming

Poling for tuna from the 1960s required much bigger boats, some of which later trawled for prawns. Markets for rock lobster (crayfish), caught from early days but not popular, were also expanded at home and overseas. To counter the added pressure on fish stocks by the use of bigger, faster boats and more efficient equipment, controls were introduced on these species, plus gummy shark and abalone, as they developed as profitable fisheries. Bigger boats again were introduced from the 1980s to undertake deep-sea trawling in Commonwealth waters.

Aquaculture began in the 1970s with the introduced Pacific oyster. Since the 1980s barramundi and other scale fish have been farmed and from the 1990s tuna has been on-grown in pens in Boston Bay off Port Lincoln, abalone and scallop farming has developed and leafy seadragons are also being bred for the aquarium trade. Aquaculture has led to the resurgence of the Port Lincoln area, with tuna farming alone rising in value from $40 million in 1996–97 to $168 million in 1998–99.

From the beginning of white settlement fishing has been the most popular recreational activity in Australia, with people line fishing for whiting, snapper, tommy ruffs and garfish from jetties, beaches and boats, and netting for mullet and black bream; mainly callop is caught in the River Murray where once the mighty Murray cod teemed. Strict size and bag limits apply for recreational fishers for crustacea as well as scale fish.

Thus the fisheries management measures begun in the nineteenth century, greatly enhanced in the mid twentieth century and continuing to develop, have made South Australia the envy of other states. 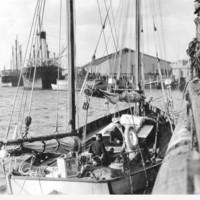 Wallace-Carter, E, For They Were Fishers: The History of the Fishing Industry in South Australia (Adelaide: Amphitrite Publishing House, 1987)