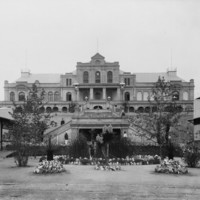 Commemorated the jubilee of both the colony and Queen Victoria’s reign.
1936

Held after World War II, The Hiroshima Panels was a powerful statement against nuclear war.
1988

The Australian Bicentennial Roadshow toured throughout the state

The tour presented a series of related themes, and local community contributions were incorporated at each stopping place.

Exhibitions have been major occasions in the lives of many South Australians. Often commemorating national, state and local events, they have expressed the cultures of their times, with education, propaganda or profit determining what was exhibited and how it was presented.

Nineteenth century exhibitions were designed for learning by looking. Objects aroused curiosity and imagination, and museums and galleries, dioramas and cycloramas had popular appeal. Exhibits of new technology were major attractions. Presentation methods changed as steam power was superseded by petrol, then electricity. Crammed displays were rearranged more scientifically and provided with context and interpretation. Intrusive labels were replaced by discrete information panels and interactive multimedia displays.

Trade and commercial exhibitions celebrated achievement and prosperity. The Adelaide Jubilee International Exhibition in 1887, which commemorated the jubilee of both the colony and Queen Victoria’s reign, followed South Australia’s participation in a series of international exhibitions. The government provided the venue, the Exhibition Building on North Terrace, and public-spirited citizens covered running costs. This exhibition was a great political and commercial success, attracting hundreds of exhibits from interstate and overseas, mainly the British Empire and western Europe. Prizes were awarded under the categories of mining, manufactures, education and science, art, machinery, agriculture and horticulture. Artificial lighting enabled the exhibition to be opened at night, and rail-fare concessions encouraged visitors.

The 1936 South Australian centenary celebrations began with the Centennial Exhibition of Empire Manufactures, Products, Arts and Industries, the fifteenth exhibition organised by the Chamber of Manufactures and the first held in Centennial Hall at Wayville Showgrounds on the outskirts of the city. Firms participated in competitive and non‑competitive sections, trades and technical schools were well represented, and music and art competitions reached a high standard. Major attractions included the first streamlined locomotive built in Australia, sideshows and a fireworks display. Other popular centenary exhibitions were the Children’s Empire Pageant on Adelaide Oval, a national flower day, a floral pageant and a national air show at Parafield to the north of the city.

As part of the Commonwealth Jubilee Celebrations in 1951, a Jubilee Train with displays contributed by Commonwealth and state government departments visited Adelaide and country towns. The display of uranium ore under ultra-violet light was both topical and popular. The touring Australian Bicentennial Roadshow in 1988 presented a series of related themes, and local community contributions were incorporated at each stopping place. Another exhibition, on the history of local government in South Australia, organised for the Bicentennial by the Local Government Association with contributions by local councils, toured throughout the state. Other major events to be marked by exhibitions included the state celebrations of Jubilee 150 (1986), the Centenary of Women’s Suffrage (1994) and the Centenary of Federation (2001).

South Australia has also sponsored numerous art shows. Exhibitions by official war artists held during and after World War II attracted a wide public and culminated in 1958 with The Hiroshima Panels, a powerful statement against nuclear war. South Australians have benefited from international tours, particularly after the Adelaide Festival of Arts’ inauguration. The high proportion of the state’s population attending exhibitions secured the first of the 1970s’ ‘blockbusters’, the Chinese Exhibition, which showed recent archaeological finds including a jade burial suit. The relative inaccessibility of China at the time enhanced its appeal. During its brief life, the History Trust’s Constitutional Museum in Old Parliament House exhibited the state’s political history. Commercial expos continue at Wayville Showgrounds and the Adelaide Convention Centre on North Terrace, while major exhibitions by the Royal South Australian Society of Arts and the state’s library, museum, and art gallery enhance the cultural reputation of North Terrace. 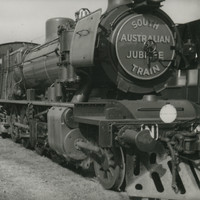 Image courtesy of the State Library of South Australia, SLSA: B 21855, Public Domain 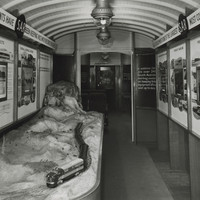 Image courtesy of the State Library of South Australia, SLSA: B 21873, Public Domain 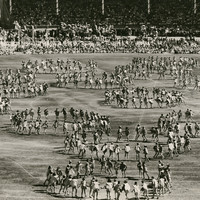 Image courtesy of the State Library of South Australia, SLSA: B 8334/70, Public Domain 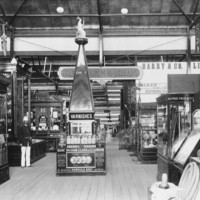 Image courtesy of the State Library of South Australia, SLSA: B 10212/22, Public Domain 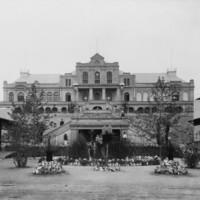 Image courtesy of the State Library of South Australia, SLSA: B 10212/3, Public Domain 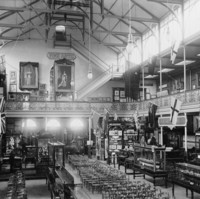 Image courtesy of the State Library of South Australia, SLSA: B 10212/10, Public Domain 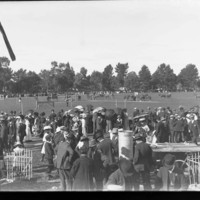 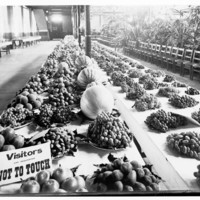 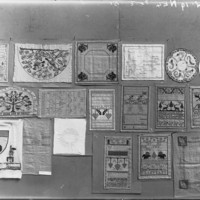 Associated with:
Exhibition Building and Grounds