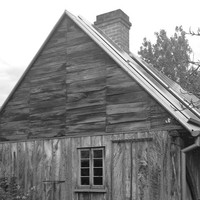 European settlers in South Australia relied heavily on locally gathered building materials, and until the 1850s Adelaide was predominantly a town of earth and stone cottages with thatched or shingled roofs. A few migrants arrived with tents or the popular prefabricated timber houses made by Mannings of London, which came in kit form. From the 1850s imported corrugated galvanised iron began to replace shingles and thatch, especially after flammable roofing materials were prohibited in 1858. By that time, sawn softwood timber for wall framing was also being imported.

Few country areas outside the Adelaide Hills had enough large trees to provide bark or slab for building, but in the Flinders Ranges, Mallee and River Murray regions a technique called ‘pug-and-pine’ used native pine trunks rendered with clay for walls. A distinctive construction method around Hahndorf and other German towns was the use of timber frames called Fachwerk, similar to English medieval half-timbering. One vestige of early building practices that persisted until recently in farming areas was the use of wheat straw roofs on outbuildings. Not true thatch, which must be steeply pitched to achieve rapid runoff, these thick straw roofs simply soaked up the light rainfall.

Stone, however, was South Australia’s predominant building material. At the 1911 census, in the classification of outer wall materials of private dwellings, over 62% of South Australian houses were of stone, compared to 8% in Australia as a whole, and only 9% were of wood, compared to 55% nationally. Seventy-one percent of Australia’s stone houses were in South Australia; no other state’s proportion of stone went above 6%. This deviation from national practice can be attributed to three causes: social pressure to promote the colony by building substantially; a very sparse timber resource; and, above all, relatively cheap labour costs. Many South Australian districts had their own distinctive local stones, such as Barossa ironstone, Tantanoola dolomite and sawn Mount Gambier limestone. A material characteristic of Adelaide was bluestone, not the sombre Victorian basalt of that name, but an attractively mineralised slate, quarried in several places around the metropolitan area, and frequently used with red brick quoins (corners) and dressings to openings. The combination of bluestone walls with brick details was a common motif of Adelaide buildings from the 1850s to the 1920s and still gives the city a distinctive appearance. Roofing slate was quarried at Willunga on the Fleurieu Peninsula from 1840, but imported Welsh slate had a considerable cost advantage.

Bricks, manufactured from the beginning of settlement, were never very popular in the nineteenth century because of their cost. With the widespread adoption of brickmaking machinery and the large, efficient, continuously operating Hoffman kilns by the early twentieth century, the cost of brick had fallen relative to stone masonry; the inter-war period saw brick become the staple material of the suburban housing market, assisted by cavity wall construction with its better weatherproofing. However, the old prejudices remained, and brick bungalows were usually faced with a veneer of stone on the front wall, often an appealing sandstone like Basket Range stone. Marseilles (earthenware) roofing tiles, manufactured in South Australia from 1922, for some reason never achieved the popularity they had in the eastern states, failing to displace corrugated steel sheeting.

Modern high-quality Portland cement was manufactured at Brighton from 1882, and concrete was soon used for major engineering works such as the Beetaloo Dam in the ranges near Port Pirie in the Mid North. In the early twentieth century it diversified to become an important building material. Experiments in reinforced concrete housing by Walter Torode and others failed to have much impact on the mass housing market, but from 1907 Monash & Anderson’s South Australian Reinforced Concrete Co. pioneered high-rise buildings in Adelaide. The most conspicuous concrete structures in South Australia are the ubiquitous stobie poles, patented by engineer James Stobie for the Adelaide Electric Supply Co. in 1924 and still in use. Since 1945 building practices and the range of building materials available in South Australia have been dominated by a national building industry, and the modern timber-framed, brick-veneer, concrete-tiled suburban house is virtually identical throughout the country. 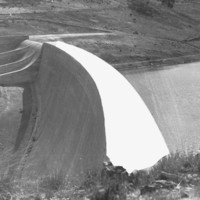 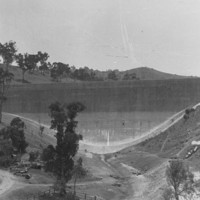 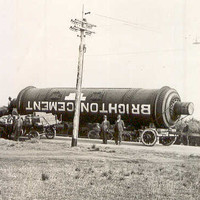 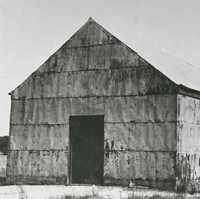 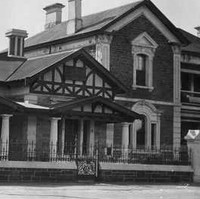 A large home on South Terrace, 1930. Its architecture incorporates both bluestone and German fachwerk methods and materials
Courtesy of/Photographer:State Library of South Australia 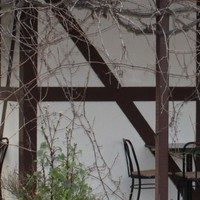 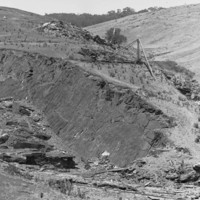 The slate quarry at Willunga, 13 March 1924. Slate from this quarry was used in the manufacture of roofing shingles 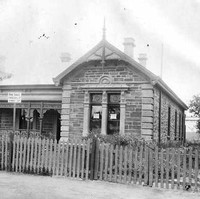 A bluestone villa advertised for sale, 1918 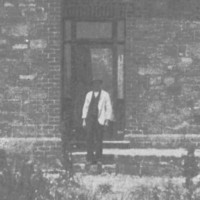 A bluestone villa with brick quoining around its corners, windows and front door, c. early 1900s 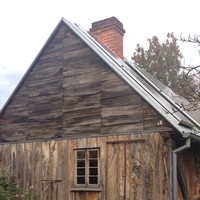 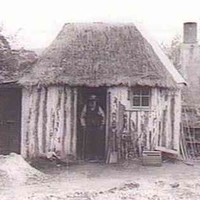 An elderly man stands in the doorway of an early pug-and-pine house near Tumby Bay, c. 1910
Courtesy of/Photographer:F.J. Barnes 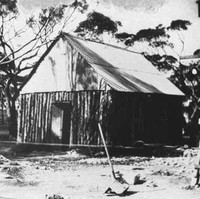 Barabba Primitive Methodist Chapel, 1925. The chapel is a pug-and-pine structure erected in 1876 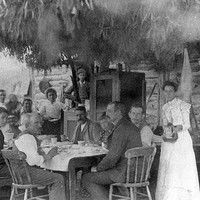 A group of people pose for a photograph outside a pug-and-pine structure near the River Murray, c. 1898

Bell, P, Early bricks and brickwork in South Australia (Adelaide: SA Department for Environment, Heritage and Aboriginal Affairs and the City of Adelaide, 1998)