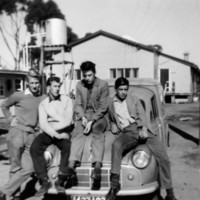 Smithfield migrant hostel was administered by the Commonwealth Government.
1971

Smithfield, when the migrant hostel opened, was an isolated rural area. It took about an hour by train to get to Adelaide city centre. Apart from the migrant hostel there were some railway cottages and farm buildings, and not much else.

Smithfield migrant hostel was located in the former army ordnance depot near the Smithfield Railway Station, army buildings of wood and corrugated iron were converted to sleeping huts. Six of the buildings with verandahs over a metre off the ground posed safety concerns for families with children living at Smithfield. The verandahs were supported on brick piers with wooden steps at each end. In 1950 some improvements were made, including replacing tar paper lining in huts and installing better doors. There were at least 11 sleeping huts by 1956. Families were allocated huts or sections with up to three bedrooms and a sitting room. Separate 'ablution huts' provided communal showers and toilets. Dining and laundry facilities were also communal. Staff had separate quarters. Other buildings on site were used for administration and storage.

After we’d been there a while Mum and Dad dug one or two little flower beds, they must have been quite narrow, and I remember they planted carnations. I guess carnations were about the only plant they thought would be hardy enough to survive there … it would have been poor soil.  And then when it came to a community dance, I think [it was] arranged through the school … I was able to take in a couple of large bunches of carnations and that really surprised the staff.  Helene Mole (formerly Trejtnar) Smithfield hostel, early 1950s

In early 1949 Smithfield housed between 40 and 50 Displaced Persons from Europe. It appears that initially the residents were all men, working at places including  Holden's Woodville Plant and the Perry Engineering Works. The Advertiser described Smithfield as a 'Camp for Balts' and reported improvements underway to expand the capacity so that the hostel would hold 800 people. It is not clear from the records whether numbers ever reached this level, but by late 1949 there were between 300 and 480 people living at the site. Rent was £2/12/6 a week. By this time residents included women and married couples.
By 1951 there were reports of British migrants living at Smithfield. During this time there was an active association with the Gawler Caledonian society. Also in 1951 the Gawler Girl Guides started a company at Smithfield hostel. Smithfield residents joined the rent strikes in June 1951. At the end of 1952 about 200 British migrants were moved to Gepps Cross, Rosewater and Finsbury. In 1953 the site was returned to the Department of the Army, however in 1955 British migrants were again housed at Smithfield. Children attended the Smithfield primary school. A social committee of British migrants was formed at Smithfield in July 1955. The Salisbury Good Neighbour Council and Christian Women's Association welcomed migrants, visited and arranged social activities. These and other groups, including the religious organisation Toc H, were active at Smithfield until the early 1970s when numbers dropped. The hostel officially closed in 1971. 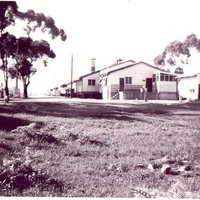 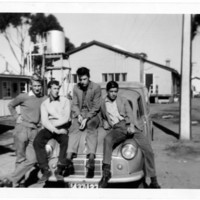 Thanks for sharing John

My family arrived in Adelaide 4 July 1961 and was sent to Smithfield Hostel, I was 13 and made good friends with Wayne the catering managers son, we used to trap rabbits under the buildings and run amongst the sheep in the paddocks. Good memories.

Arrived in 1951 at Smithfield migrant hostel, went to the Smithfield Primary school. Still see it very often on Anderson Walk all boarded up. We were then moved to Gepps Cross, the Nissen huts where I got polio. Dad built us a house at Camden Park where I lived until married. Now live near Gawler and retired as a builder.

Thanks for sharing your memories Tony,
It sounds like you had a very interesting time. We'd love ot see the photos of your mother receiving her award.

I Tony Berryman along with my parents arrived at Smithfield hostel in 1958. we came from Cheshire in England. I mey many freinds in the hostel and remembermost to this day. I attended Gawler High school and wen on the train sometimes a steam train the other times a barwell bull train then Red hens. My Mother Margaret (peggy) Berryman worked in the canteen as supervisor and the chef was elmer Senbergs. the office manager was mrs Rawlings and the Hostel manager was mr Patrick he live in the house at the back of the hostel. we always had great meals and were very happy living there I remember mrs Conny Cowels worked in canteen with my mum and also mrs Davis from Wales remember the brown crib back which we picked up from canteen with nect days lunch. I remember the Shaw family Glen Shaw was my mate and Michieal Cowels, the Goodwin family, and so many more. My father worked at Weapons Reasearch and rode his bike from the hostel up Curtis road to the main gate I remember all the ladies doing exercises and dancing in the main recreation hall and we boys would sneak up to the open windows and throw firecrackers inside boy did they get mad and chased us out into the tall grass where we lay quiet till the gone. I remember not a house on the hostel side of the railway and could see the Elizabeth park shops as no houses north of the park shops we could also see smithfield roadhouse clear as no houses around only thye smithfield primary school we used to take our rifles onto peachy road and fire down the road ricochetting bullets everywher No cars No people just wheat paddocks and snakes and bunnies. after a time we were lucky to get a brand new rental house in Charford St Next door the the Shaw family. My mother continued working in the hostal canteen and was presented with an award for service I have the pics and also pics of chef and kitchen staff. they were good days and everyone made long lasting freinds and turned the rental houses we got into mini botanical gardens everyone made beutiful gardens and lawns everyone was so proud and took care of things so many more memories of Elizabeth becomming a city wish I could turn the clock back ! in closing myself my parents Danny Berryman MargaretBerryman and myself came out on the P&O ship Strathnaver and made friends onboard and in Elizabeth such as Glenn Shorrock Barnsy and many others from the Dauntsy rd club and was with Glenn when he started his musical career and still catch up when he is in town

Thanks for sharing your story Graham. It sounds like an interesting time.

I was a resident there for 3 months along with my family in March/June 1970, moved to Sale in Victoria, Memberof the RAAF.