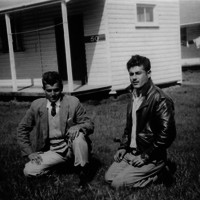 Buildings previously used as the Semaphore Police Training College became the Semaphore migrant hostel. It was administered by the State Government.
1956

Semaphore hostel appears to have been home to young single men working in the area. Its proximity to the beach provided at least one attraction for residents.

Also called Glanville hostel or Port Adelaide hostel, Semaphore was made up of about fourteen weatherboard buildings with tin roofs. The sleeping quarters housed four men to a room. The buildings were on stilts, with wooden steps up to the rooms, which were furnished sparsely with a bed and wardrobe There were no heaters, though residents were given extra blankets in winter.
Semaphore hostel had communal laundry, shower and toilet facilities, as well as a communal dining room serviced by a large kitchen. There was also a recreation room. As at other hostels, linen was provided.
The hostel was administered by the South Australian Immigration, Publicity and Tourist Bureau. The site had the capacity to house up to 100 people, but probably only reached between 70 and 80 at the most.
Some of the buildings used as part of the hostel are still standing on the site and are now a part of Le Fevre High School.

Glanville was alright we were getting plenty of bread. They probably got the message, they said ‘Greeks want bread’, they can't eat without the bread. George Iosifidis, Semaphore 1955, interviewed 2012

Semaphore hostel appears to have accommodated young single men working around Semaphore and Port Adelaide. Many were employed by the Harbors Board and the Engineering and Water Supply Department. Female visitors were not permitted under hostel rules.
Migrants could stay for the first seven days free of charge, after which they were required to pay rent and board. A rebate could be given if residents had lunch at their workplace instead of taking the packed lunch from the hostel. In 1956 rent was  increased from £3/12/6 a week to £3/15/- a week.
Newspaper reports and archival records suggest the hostel was intended to accommodate British migrants; however, assisted migrants from other countries were housed at Semaphore, and it is possible that European Displaced Persons stayed there as well.
The last intake of British migrants was in 1952, after which time Semaphore appears to have operated as a boarding house for migrant workers rather than a migrant reception centre. It officially closed in September 1956. 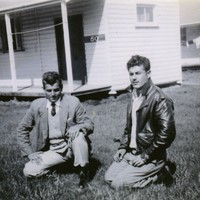 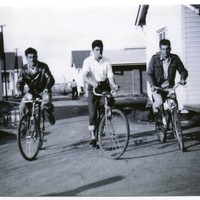 Thanks Tony, that's interesting to hear! The researchers at the University of Adelaide had a lot of trouble finding people who'd been housed at Semaphore, I'll pass on your information.

Hi, my wife and I visited Adelaide last weekend and went to look for the Migrant Hostel in Hart Street based on the information on your webpage. There appears to only be 2 buildings standing in the Le Fevre School Grounds which look like part of the original hostel. My Dad, Verius Antonius Laarakkers immigrated to South Australia from the Netherlands in 1951 and was first housed at the Semphore Immigrant Hostel when he arrived. It was wonderful to see this part of both Sempahore's and my family's history. Thank you so very much for making this information available.