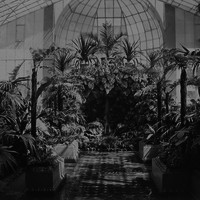 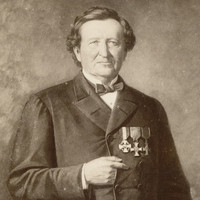 Director Richard Schomburgk proposes the construction of the Palm House

South Australian Government authorises the construction of the Palm House components in Bremen, Germany, and their shipment to Adelaide
1875 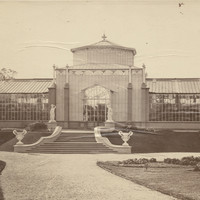 The Palm House opens to the public 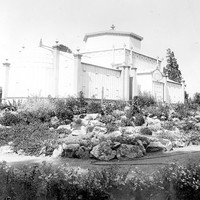 Installation of the rockery garden

The grass slopes were decried as ugly, so were replaced
1983

With a $1.1 million grant from the Federal Government, restoration works begin 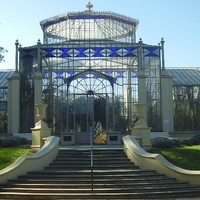 Re-opening of the Palm House

Built in 1877 as a greenhouse for tropical plants, the Palm House was immediately hailed as the pride of the Adelaide Botanic Garden, and even of the city of Adelaide itself. It was the prized achievement of Dr Richard Schomburgk, the second and most renowned Director of the Botanic Garden. While it no longer houses tropical plants as originally intended, its restoration in the 1990s has meant that the Palm House is still a prominent part of the Botanic Garden experience.  It remains as the only known extant German-built glasshouse of the period anywhere in the world.

Prior to the construction of the Palm House, the Botanic Garden had a significant history with the presentation of tropical plants. Before leaving his native Germany for South Australia in 1848, Schomburgk had participated in a three-year expedition to the rainforests of British Guiana (now Guyana) to study tropical plants. This expedition sparked a lifelong fascination with orchids, ferns, palms and especially waterlilies. After witnessing the majesty of the giant waterlily, the Victoria regia (subsequently Victoria Amazonica), in its natural habitat, Schomburgk became dedicated to flowering one himself. To this end, he built the Victoria House in 1868, the first heated greenhouse of the Adelaide Botanic Garden. Though he was not the first to manage a successful waterlily bloom in a botanic garden, his attempts were nonetheless an Adelaide media sensation. When the lily first bloomed for the public, more than 30,000 visitors came to witness it, a remarkable number given the population of Adelaide at that time. Given this popular success (as well as the fact that Victoria House was made primarily of wood and thus was already rotting by the early 1870s due to the heat and moisture of the air), Schomburgk outlined his ambitious plans for a new, larger, glass hothouse to house the significant number of tropical plants that he had by this point acquired.

He first announced his desires for a new building to house tropical plants in his 1873 annual report as Director, where he stated that he had heard of an iron construction built in Bremen, in his native Germany. He was so impressed by this building that he petitioned the Government to have an identical building built in Germany then shipped in pieces to Adelaide for assembly. He estimated that this would cost £1400. Luckily for Schomburgk, due to a boom in the commodity market in South Australia at that time, the colony was enjoying great economic prosperity. Ideas of ‘civilised’ society at that time necessitated the maintenance of prestigious public gardens, and Schomburgk himself was highly popular due to his success with the Amazonian waterlilies. As such, the Government readily accepted this plan, authorising the purchase from Germany in 1874.

The prefabricated materials for the Palm House arrived in Adelaide in 1875. Schomburgk highly praised the combination of wrought and cast iron in his personal notes, but neglected to mention the fact that due to inadequate protection while shipping, the panes of German glass had arrived smashed and unusable. As a result, employees of the Botanic Garden were given the task of glazing new glass themselves to try to keep as close as possible to the original budget. The final bill totalled £3000, more than twice the initial estimate.

The location of the Palm House was determined by problems encountered in the operation of Victoria House, which was prone to issues with the heating system due to flooding after heavy rain. As such, an artificial mound was created, with the Palm House sitting atop the new peak. The excavation of this soil produced a new pond nearby. Within this new mound, a coke-burning tubular boiler was placed, safe from flooding. This heater, working with a system of pulley-operated window ventilators, worked to keep the interior of the Palm House at the conditions required for tropical plants to thrive.

In the centre of the House, beneath an elevated central rotunda, stood a Latania Borbonica, a large palm native to Mauritius. As soon as it was planted, Schomburgk realised that it would soon reach the ceiling, and thus would need to be removed or the roof raised. He was nevertheless optimistic towards the prospects of another, even grander, Palm House for the Garden in the future. Apart from this main feature, the House included many ferns and other small tropical plants moved from Victoria House. At one end stood a rock formation imported from the Black Forest in Germany, turned into a water feature. The mound was ascended by a stone staircase, bounded by statues of Roman goddesses Pomona, Clio, Ceres and Flora.

The Palm House was opened to the public in 1877, to great public acclaim. The opening ceremony was hailed as a gathering of 300 of the ‘elite of the city’. Lady Jeanie Musgrave, the wife of the Governor, declared the building ‘a fairy palace’ which ‘all Adelaide will appreciate with pride’. Schomburgk himself, though he was unable to attend this grand event due to problems with gout, described the building as ‘like a fairy tale of the thousand and one nights’.

Schomburgk’s concerns regarding the likelihood of the central palm growing too big were well-founded. By 1893 his successor as Director, Maurice Holtze, bemoaned the fact that even after lowering the palm six feet, it had still quickly reached the roof. As South Australia had by this point left its period of economic boom, no funds were forthcoming to either extend the Palm House’s roof or to construct another, grander structure. This lack of monetary support was indicative of the next hundred years of the Palm House’s existence, slowly becoming increasingly dilapidated due to decreased funding.

By 1910, newspapers were critical of the state of the Palm House, claiming that the slopes of the mound upon which it stood had been worn bare by children using it as a slide. There were also criticisms that even the sections that retained their grass were unsightly during winter months, with the colour changing from green to a dull brown. In 1922, the main approach to the building was redesigned into a rock garden, which was held to be far more attractive. Many small flowering plants brought colour to a previously desolate hillside.

When Brian Morley was appointed the seventh Director of Adelaide Botanic Garden in 1981, the buildings of the Schomburgk era had been neglected for decades, and were visibly deteriorating. In 1983, a major restoration of the Palm House was considered a high priority, but the estimated cost of repair was far beyond the budget of the Botanic Garden. In 1986, due to the danger to the public of falling glass, the Palm House was closed to visitors. A century of hot, humid air had corroded the ironwork holding the glass panes in place. Two years later, Schomburgk eventually got his wish of a new and expanded tropical conservatory, with the opening of the renowned Bicentennial Conservatory. With many plants of the Palm House moved to this new, much grander conservatory, the Palm House remained closed to the public.

However, by 1991 the heritage value of the Palm House was acknowledged, and the Federal Government offered a $1.1 million grant to the Botanic Garden for a full restoration. Lasting until 1995, this restoration was highly successful, and even won a prestigious industry award: the Commendation for Conservation from the Royal Australian Institute of Architects. As a result of this renewal, however, the Palm House was transformed from a tropical greenhouse into a temperate enclosure, for reasons of both cost and practicality. It has ever since been planted with an exhibition of Madagascan plants which do not require artificial heating or humidity, due to the similar climatic conditions of Adelaide’s weather. Though it may no longer serve its original function as a tropical glasshouse, after decades of neglect and even public inaccessibility, the Palm House once again holds its place as a jewel of the Adelaide Botanic Garden. 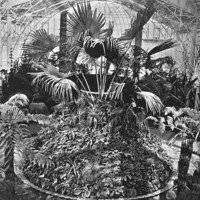 Courtesy of the State Library of South Australia, SLSA B 56812,  Public Domain. 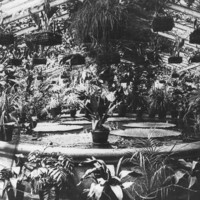 Courtesy of the State Library of South Australia, SLSA B 56813, Public Domain. 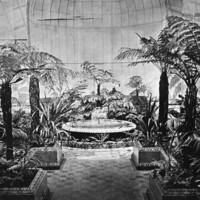 Image courtesy of the State Library of South Australia, SLSA B 56814, Public Domain. 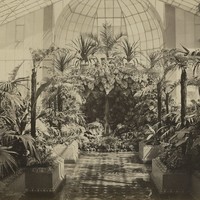 Image courtesy of the State Library of South Australia, SLSA B 10160, Public Domain 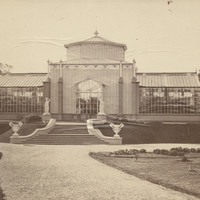 Courtesy of the State Library of South Australia, SLSA B 72737, Public Domain. 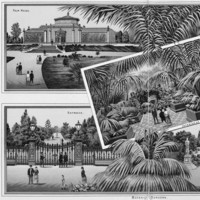 Image courtesy of the State Library of South Australia, SLSA B 5220/10, Public Domain. 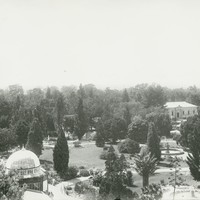 Image courtesy of the State Library of South Australia, SLSA B 63791, Public Domain. 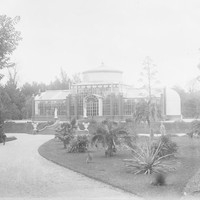 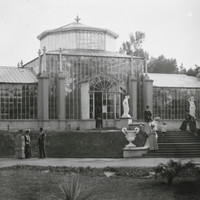 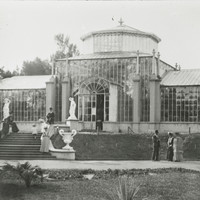 Image courtesy of the State Library of South Australia, SLSA B 64148, Public Domain 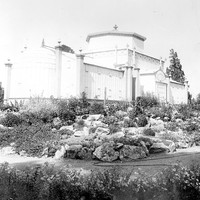 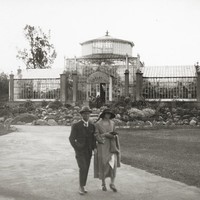 Image courtesy of the State Library of South Australia, SLSA B 4436, Public Domain

Thanks Brian, we welcome community contributions to the SA History Hub site, if you have content to contribute please get in touch via the contact us form (bottom right of the page).

This is an excellent overview although it fails to mention the reinstatement of the two formal flights of Mintaro slate steps and grassy slopes of the original concept.
Comparable treatments of the Bicentennial Conservatory and Beechwood Conservatory in Stirling would complete matters.
It is a pity that no digital version of the videos of the building of the Bicentennial Conservatory and restoration of the Old Palm House seem to have been made. Perhaps this is a project worth consideration?

The Express and Telegraph. The Botanic Gardens Crowded. 13 October 1910, p4.

Aitken, Richard, Seeds of change: An illustrated history of Adelaide Botanic Garden (Adelaide: Board of the Botanic Gardens and State Herbarium, 2006).