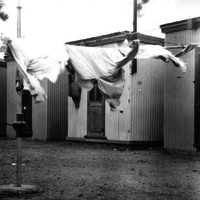 The hostel at Whyalla was unique in that it was jointly administered by the Commonwealth and State Governments and by BHP.
c. 1977

Whyalla in the post-war era was a boom town with a large influx of migrants arriving from a range of countries. New houses were being built as rapidly as possible. Milpara provided a place to stay while migrants waited for their new homes to be ready.

The first residents of the Milpara hostel in Whyalla were intended to be ‘150 immigrant building tradesmen and 50 assistants’. In the post-war era Whyalla expanded rapidly as hundreds of migrants arrived, most to work for BHP. Houses were needed to accommodate this influx.

Buildings were moved from a former army camp at Hummocky Hill and placed on new foundations on Lacey Street. BHP had already built two single men’s quarters around the site of the current day Whyalla Maritime Museum, off the Lincoln Highway. These were built to accommodate workers at BHP, as was a portion of Milpara.

Single men’s quarters were long, barrack style buildings or small huts with rooms just big enough to fit a bed, a small beside chest of drawers and a narrow wardrobe. Rooms for families were slightly larger, but still basic. They conformed to the standard hostel style with metal beds, hostel-allocated linen, perhaps a small table and chairs, and the same drawers and wardrobe.

As with other migrant hostels, dining, shower, toilet, and laundry facilities were communal. It appears residents were able to access local medical facilities rather than an on site hospital as was usual in Commonwealth-run hostels. It was possible for residents to walk to local shops and other facilities.

We all had a single bed, there were no double beds for a couple … and a single metal cupboard, a small table with two chairs … so the children sat on the beds and Paul stood in his cot … it was the lack of water that concerned me a lot. The fact that you were in that room, you couldn’t do anything else yourself. You had to go to the kitchen hall, dining hall, if you wanted a drink. Hazel Redford, Milpara 1967, interviewed 2013

Milpara accommodated Displaced Persons and assisted migrants from a range of European countries. There were concerns early in the life of the hostel that British migrants were not happy and were leaving Whyalla. Various parliamentary debates and newspaper articles raised the issue, with the Premier Thomas Playford arguing that British migrants, unlike Displaced Persons, were not compelled to stay in Whyalla.

Once house-building gained pace, through the South Australian Housing Trust and the BHP Employees Assisted Housing Scheme, British migrants employed by BHP were given priority in the allocation of housing. Interviews with former residents suggest that in the 1960s and 1970s British arrivals usually only stayed a few nights at the Milpara hostel while they waited for a house to be prepared. Assisted migrants from other countries often lived at Milpara for weeks, or months, at a time.

A variety of publications, and at least one film, were produced to provide potential migrants and new residents with information about Whyalla. There were also efforts to welcome new arrivals to Whyalla. The names and place of origin of migrants were published in the newspapers when a new ship arrived and Whyalla residents often visited the hostel, particularly to welcome people from locations close to where they themselves were from. An active Good Neighbour Council committee, Young Women’s Christian Association and various other community groups visited the hostel. They organised a number of services, such as English lessons and social activities including dances. Hostel residents were able to attend the local open air cinema, the Ozone, in Whyalla. 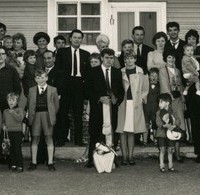 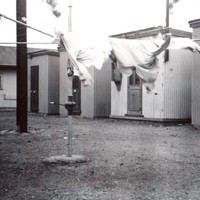 Our family were one of the largest to migrate to Whyalla in the latter days of assisted migration. The 9 of us stayed some weeks in the hostel, it was very different from the Scotland we’d left behind. Within weeks of arriving the temperature was over 100°F. The meals were aimed at the majority of the migrants who at that time weren’t from the UK, so we had a lot of pasta, or what passed for pasta at that time (1970). It was uncomfortable having to live in such close proximity to strangers and people of other cultures for a family from a small town in Scotland. But we adapted in time and I think my parents were very brave in taking the life changing decision to migrate to Australia.

I stayed at the hostel when i was 6 years old arriving from the U.K with my family in 1972. We where there for a few weeks and then moved into a housing trust house in litchfield street. In 1979 i was an army cadet and parade was held every thursday at the same place then the home for army, navy and airforce cadets.