In the late nineteenth century many young people were able to enter the urban work force by becoming skilled in shorthand and typing. Pitman’s shorthand, by which stenographers, court reporters and journalists could take dictation at up to 180 words per minute, had been developed in the mid-nineteenth century, so in 1887 an enterprising Scot named Alexander Muirden thought it timely to open Adelaide’s first business college, the Adelaide Shorthand Institute. Five years later he was joined by his younger brother William, born in Sutherland, Scotland, on 9th May 1872, the son of Alexander Muirden, sheriff-officer and auctioneer, and his wife Catherine (née McKay).

The first practical typewriter came onto the American market in the early 1870s and in 1875 Adelaide saw its first example of the new invention and marvelled at the accomplishment of the woman who operated it. Typing joined shorthand as a core subject at the Shorthand Institute, and Adelaide’s first typing agency was established there in 1893. Alexander left Adelaide in that year and William Muirden joined William Hogg in operating the Shorthand and Business Training Academy, which aimed at giving ‘a thorough and practical training for actual business life’. It was also remarkable for offering South Australia’s first education by correspondence in 1895.

Hogg left the business in 1900 and William Muirden established, in two small rooms of Ware Chambers in King William Street, the Muirden College for Business Training, with twelve day students and one evening student. By 1906 there were 250 students and by 1912 over 700. As the college strengthened its position, it widened its curriculum and by 1915 was offering what it called ‘a thorough English education’, preparing students for examinations in the Public Service, University (preliminary, junior and senior), pharmacy and teaching. Its graduates were soon to be found in most Adelaide business houses and in the Commonwealth and state Public Services. The college occupied several premises before moving in 1929 to its present location at 368 King William Street.

William Muirden married Mabel Florence Lambell at Mile End on 14th December 1897 and they had a daughter and three sons, establishing a lineage that has provided principals for the college ever since. Muirden gained his B.A. degree at the University of Adelaide in 1910. He established the William Muirden Book Club, was a Trustee of the Wayville Institute, belonged to the Wayville Literary Society and the Caledonian Society, and was a deacon in the Congregational Church. He taught typing and shorthand at the South Australian School of Mines and Industries and from 1913 to 1934 produced a series of booklets on subjects such as grammar, spelling and commercial practice for students preparing for public examinations throughout Australia. In 1914 he was commissioned by the state government to report on commercial and technical education in Britain and Europe and in 1924 he helped to establish King’s College (now Pembroke School).

He had bought Hassett’s Business College in Prahran, Melbourne, in 1923 and two years later moved there to be Director of the college. He was assisted by two of his sons, but another, Hector, remained behind as principal of the Adelaide college.

Tall, robust and handsome, William Muirden impressed those who met him with ‘the balanced symmetry’ and ‘harmony’ of his nature. He died at his Melbourne home on 25th November 1940 and was cremated. 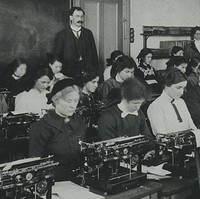 A group of students partake in a typing class at Muirden College, c. 1911