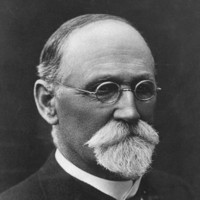 Walter Gill was born in Welford, England to Congregational minister Reverend Walter Gill and his wife.
1868

Inspired by his mother, an amateur botanist, Gill developed a keen interest in botany and forestry. He conducted his apprenticeship at his uncle's Dorset-based plant nursery, Gill and Company.
1876

Gill emigrated to Adelaide, and began working for his uncle, Joseph Keynes, at Keyneton. He later worked as an overseer at Mt. Remarkable, and then for the Willowie Land & Pastoral Company.
1884

Gill was appointed the Sub-Inspector of Crown Lands and travelled extensively throughout South Australia.
1890

After serving as Chief Forester at the Wirrabara Forest plantations and nursery, Gill succeeded John Ednie Brown as South Australia's Conservator of Forests.
1902

In this landmark book, Gill argued that the pace of forestry cultivation in South Australia was not keeping pace with demand for pine timber. Recognising that pines matured in Australia in half the time it took for them to mature in Europe, he suggested mass planting of the 'Remarkable Pine' in identified tracts in south-east parts of South Australia.
1929

When Walter Gill retired in 1923 after thirty-three years as South Australia’s third Conservator of Forests, he encapsulated his life and drive in the words of Thomas Carlyle: ‘Study to do faithfully whatever in your actual situation there and now you find either expressly or tacitly laid to your charge; that is your post; stand in it like a true soldier; silently devour the many chagrins of it, as all human situations have many; and be your aim not to quit it without doing all that is at least required of you.’

Gill was born on 13th October 1851 in Welford, Northamptonshire, England, to Congregational minister Reverend Walter Gill, and was educated at Heathfield School in Dorset. Associated with a family of tree growers, his botanical and forestry interests were inspired by his mother who was an amateur botanist. His early training and natural bias induced him to spend his leisure in botanical research, for which his country residence was favourable, and he acquired an intimate knowledge of the English flora. In 1868 Gill obtained an apprenticeship in his uncle’s plant nursery of Gill and Company, Dorset, before emigrating to Adelaide in 1876.

Upon arrival in South Australia, Gill worked first for his uncle, Joseph Keynes, at Keyneton, then on John Howard Angas’ Mount Remarkable station as an overseer, and for the Willowie Land & Pastoral Company for several years, before being appointed Sub-Inspector of Crown Lands in August 1884. In the latter position he travelled extensively throughout the state and, maintaining his botanical interest, sent numerous mounted specimens to the second Conservator of Forests, John Ednie Brown. In March 1886 Brown offered him the position of Chief Forester at the Wirrabara Forest plantations and nursery and in July 1890 he succeeded Brown as Conservator, a position he held for thirty-three years.

In June 1890 he was elected to the Fellowship of the Royal Horticultural Society and in December of that year he became a Fellow of the Linnaean Society. In 1891 he visited England and ‘aroused much interest by his lectures there on South Australian life’. In 1892 he successfully had wood from seven species of eucalypts and pines dried at a Port Adelaide seasoning plant and the timber made into furniture as a test of its stability.

An able and energetic administrator, Gill became a prominent advocate of economic forestry, advancing the value of the ‘Remarkable Pine’ (Pinus radiata) in particular. In his Scarcity of Coniferous Trees (1902), Gill argued that the pace of forestry cultivation was not keeping pace with the demand for pine timber and he noted that pines matured here in half the time that they took to mature in Europe. His solution was the mass planting of this species in identified tracts of South Australia, in particular in the South-East. He soon proved the economic worth of the Radiata Pine and other species grown in the department’s plantations. He also pioneered the use of pine timber for fruit-packing cases, thousands of which were produced at Wirrabara.

He was an enthusiastic photographer and most of the excellent pictorial record of the Woods and Forests Department’s activities during his term of office is due to his skill with the camera. He was continually called upon to give public lectures on forestry and illustrated his talks with lantern-slides of his own photographs. He distributed free seedlings, grown in the Department’s nurseries, and pamphlets to support his arguments. During his term as Conservator 10,572,000 trees were planted and 9,500,000 free trees issued to land-holders, schools, public bodies, and on Arbor Days.

Gill supervised the initially successful date palm plantations at Herrgott Springs (Marree) and Lake Harry in the far north and proved their economic return with ready sales in Adelaide. This was the first attempt to introduce Australian-grown dates to the local market. He also served as a member of the Board of Commissioners of the National Park at Belair and as a consulting forester to South Australian Perpetual Forests Limited.

Walter Gill died on 18th July 1929 and was buried at Mitcham Cemetery. 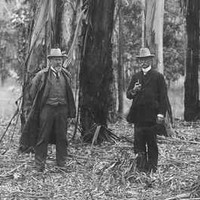 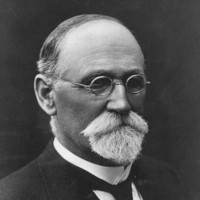 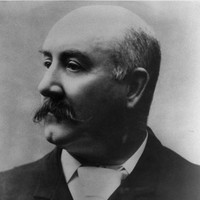