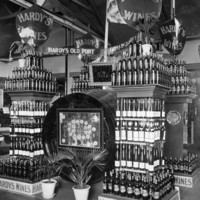 Hardy bought six hectares on the banks of the River Torrens, just west of Adelaide.
1857

Thomas Hardy made his first wine, several years after purchasing land on the banks of the River Torrens.
1876

As Thomas Hardy's wine business significantly grew over the decades, he expanded by purchasing Tintara Vineyards at McLaren Vale.

Thomas Hardy (1830–1912) was born in Devon and arrived in Adelaide in the British Empire in 1850. After working for a year on John Reynell’s farm at Reynella in the southern vales, Hardy bought six hectares on the banks of the River Torrens, just west of Adelaide, in 1853. Planting the property, ‘Bankside’, with vines, olives and fruit trees, Hardy made his first wine in 1857. By 1865 he was producing 64 000 litres of wine each vintage and by the mid 1870s this had increased to 240 000 litres made from his own grapes and fruit purchased from about forty other growers.

Hardy bought Tintara Vineyards at McLaren Vale on the Fleurieu Peninsula in 1876 from pioneer winemaker AC Kelly. By 1901 Tintara had 219 hectares under vines and Thomas Hardy & Sons Ltd had wine stores and offices at Mile End and in Currie Street, Adelaide. Much of this expansion was due to the buoyant British wine market.

Hardy lectured and wrote on the wine business and olive growing, was a member of the Phylloxera Board, Wine Growers’ Association, South Australian Agricultural and Horticultural Society and the Chamber of Manufactures, judged local horticultural shows, published regularly in the local press and wrote two books, Notes on Vineyards in America and Europe (1885) and A Vigneron Abroad, Trip to South Africa (1899).

Thomas Hardy, who died at his home, is generally regarded as the father of the wine industry in South Australia. His son Robert took over the company, which expanded greatly in ensuing decades and remained family-owned until 1992.

This entry was first published in The Wakefield companion to South Australian history edited by Wilfrid Prest, Kerrie Round and Carol Fort (Adelaide: Wakefield Press, 2001). Edited lightly. Uploaded 29 May 2015. 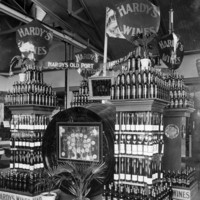 Hardy's wines on display at an exhibition, approximately 1912 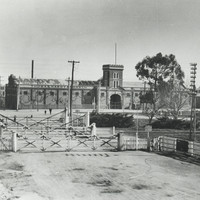 My Great Uncle was Thomas Hardy Nottage & I've just learnt that the label on the Nottage Hill wines has a spiel to him - were these wines named after him.
Also, there was a little girl, Ruby Muriel Nottage who died at Bankside South Australia was that at the Bankside Vineyards?

Hi Julie,
Under the links section above there is a link to the Hardy Wines website. They may have more information on the origin of the wine name. Re. Ruby's place of death, there was a suburb in Adelaide called Bankside, which covered areas of Torrensville and Underdale. Without further research it would be difficult to determine which Bankside her place of death was, but you may find more information at State Records - https://archives.sa.gov.au/

Was this Thomas Hardy related to the novelist with whom he shared his name?

Not to my knowledge Michael, but of course it's possible there is a connection we have not unearthed yet.