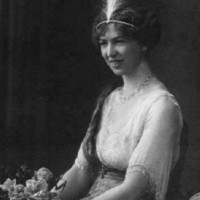 Lady Bonython once said, when addressing a meeting of the ladies committee of the Queen Victoria Maternity Hospital, ‘I do wish we were called “women”. The term “ladies” has come down so sadly in the social scale. Where once it stood for dignity and exclusiveness, it now strongly suggests the opposite.’ Her wish was eventually granted.

Constance Jean Warren was born in Adelaide, South Australia, on 7th November 1891, the daughter of merchant Charles Warren and his wife Alice Maria (née Downer). With her sister Kathleen (Bobbie) she spent a happy, carefree childhood in College Park but saw much poverty in nearby Hackney --- ‘dreadful little houses and poor wretched-looking children. Our weekly allowance was 6d. and we could get 1d. a hundred for killing snails and 3d. a hundred for killing caterpillars that infested the garden’. With the proceeds they hung modest presents on a Christmas tree at their home and invited the less fortunate to attend. Of this act Jean said later, ‘I believe it set me on the threshold of the life I was to follow.’

During her last year of schooling at Geelong Church of England Girls’ Grammar School in Victoria, her love of writing blossomed and in 1910 she enjoyed the social life of the University of Adelaide. At her debut in 1911 she met widower John Lavington Bonython, newspaper editor and mayor of Adelaide, whom she married on 11th December 1912 in St. John’s Anglican Church, Adelaide. She became ‘the Baby Mayoress’ and the stepmother of three young children. By 1920 she had three children of her own, a holiday home ‘Eurilla’ at Mount Lofty, and ‘St. Corantyn’ in Adelaide where they entertained. In 1928 she organized in one week three mayoral balls and a garden party at Victoria Park racecourse with 6,500 guests. She was the outstanding hostess of that year and described the mid-1920s as ‘those dancing years’. The most strenuous and nerve-wracking period of her life was the Depression, when great effort was required to help the many suffering people. She worked for the Lord Mayor’s Unemployment Relief Fund and in 1930 the Unemployed Depot opened, where craftwork made by out-of-work servicemen was sold. In her sixteen years there she created a different floral window display each week.

Lady Bonython was a member of 25 committees and her greatest contribution was to those associated with women and children. For many years she was President of the Halifax Street Free (later Keith Sheridan) Kindergarten and of the institution that was to become the Mothers’ and Babies’ Health Association. She was also Chairman of the Lady Gowrie Child Centre and the South Australian Kindergarten Union. In 1952 the Jean Bonython Kindergarten at Belair was named after her. She was appointed O.B.E. in 1954 and in 1966 the Mothers’ Wing of the Torrens House Mothercraft Hospital became the Jean Bonython Wing. She was a patron of young artists, a life member of the South Australian Society of Arts and President of the Ladies’ Committee of the South Australian Symphony Orchestra Subscribers’ Committee.

With her innate sense of design, her passion for flowers, her collection of Cottage Staffordshire figures and her cats (alive and porcelain), she created harmony and beauty around her. Tall, elegant and beautifully dressed --- her yellow organza coat was memorable --- she was known as ‘one of the good things of Adelaide’.

In 1970 she suffered a stroke, which made life ‘dull’ and ‘the years drag on’. Lady Bonython died on 11th June 1977 at Stirling, survived by her sons Warren (conservationist, explorer and author) and Kym (entrepreneur, broadcaster and author) and her daughter Katherine (Mrs. Colin Verco). Her ashes, as she wished, were scattered beneath the cedar tree at ‘Eurilla’. 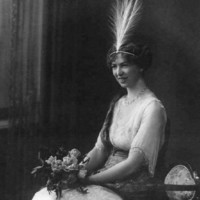 Courtesy of the Bonython family. Permission to publish required. 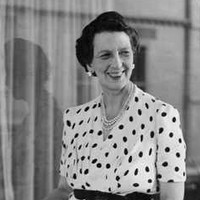 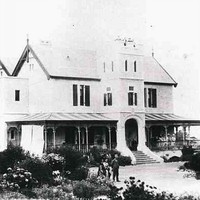