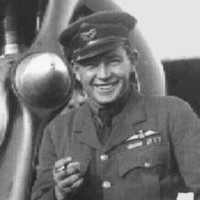 Harry Butler was a charismatic young daredevil whose barnstorming style was the first introduction for thousands of South Australians to the wonders of aviation. He was born on 9th November 1889 at Yorketown, South Australia, the son of wheat farmer John James Butler and his wife Sarah Ann (née Cook). His childhood was spent on his parents’ small farm at Koolywurtie near Minlaton. He was educated at the local one-teacher school and showed an early interest in mechanics and flying. He built model aircraft and is reputed to have caught his mother’s hens to measure their wing span and study their flight.

He became a keen motor cycle enthusiast, building his own bike on which he was able to travel regularly to Smithfield, on the outskirts of Adelaide, to work with C.W. Wittber, who was building his own aircraft. But it was World War I which catapulted Butler to prominence in the fledgling world of aviation. He passed the entrance exam for the Australian Flying School at Point Cook, Victoria, in February 1915 but, anxious to get to the action, went to England and joined the Royal Flying Corps as an air mechanic early in 1916. Within months he was an officer and flying in France. He was soon employed to teach other young airmen and by 1918 was chief fighting instructor at No. 2 Yorkshire School of Aerial Fighting. He was wounded on active service and received the Air Force Cross in 1918.

Butler was demobilized with the rank of captain and returned to South Australia in July 1919. From England he imported a Bristol Monoplane (soon popularly known as the ‘Red Devil’), an Avro Biplane and three Le Rhone engines. He then teamed up with his friend Samuel Crawford, mechanic Jack Lucas and Lieutenant H.A. Kauper to promote aviation in South Australia. Within days of the arrival of the planes, Butler was making exhibition flights and raising money by taking passengers on joy-rides.

In August 1919 the Harry J. Butler and Kauper Aviation Co. Ltd. was formed. On 6th August 1919, in the ‘Red Devil’, Butler made the first Australian mail service flight over water, flying from Adelaide to Minlaton, where he was greeted by a rapturous crowd estimated at 6,000. Most had never seen an aeroplane before. On 23rd August at Unley Oval he performed his stunt flying before a crowd of 20,000. In the next few years Butler employed his skills to promote aviation and raise funds for patriotic purposes. This promotion even extended to taking the Governor, Sir Henry Galway, into the air. In 1920 he won Australia’s first Aerial Derby, flown between points at Northfield, Henley Beach, Port Adelaide and the tower of the Adelaide G.P.O. Flying in his now famous ‘Red Devil’, he led the Smith brothers into Adelaide on the completion of their epic flight from England. As well as promoting air mail, Butler was a keen exponent of aerial photography and took the very first aerial shots of Adelaide from his Avro biplane. His company was not a financial success and was disbanded in 1921, but Butler carried on with two of the planes and much of the equipment.

On 21st July 1920 Butler married Elsa Gibson. Early in 1922 he was seriously injured in a crash near Minlaton. Despite a series of operations, he was left badly disfigured and made only one more flight. Nevertheless, he continued to promote the value of flying and established the Harry Butler Aviation and Motor Engineering Garage at Minlaton. He died suddenly on 30th July 1924 of a cerebral abscess, probably related to his earlier crash. He was buried at North Road Cemetery, his funeral being a huge public spectacle. A fine, classical revival monument, with his bronze air wings and a bronze model of his monoplane, was erected over his grave. The plane itself continued in use until 1945 and was ultimately housed in the Captain Harry Butler Memorial, opened at Minlaton in 1958. 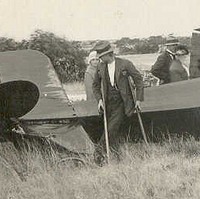 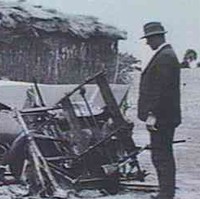 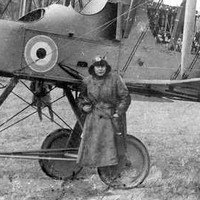 Captain Harry Butler during the First World War, c. 1918. He is standing next a Royal Flying Corps FE2b fighter aircraft 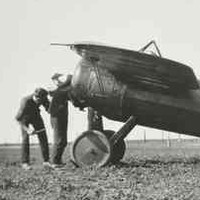 The Bristol M.1C Monoplane brought to South Australia from England by Harry Butler, 1919 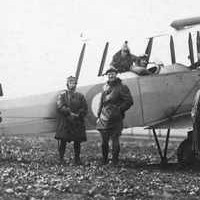 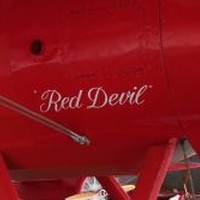 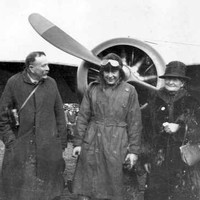 Captain Harry Butler stands with his parents in front of a monoplane, 1920 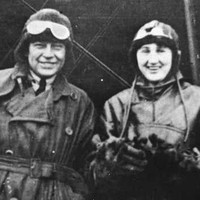 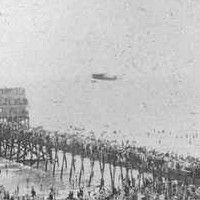 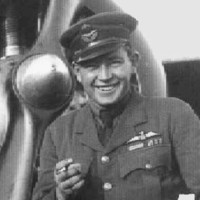 Courtesy of Ron Blum. Not to be reproduced without permission. 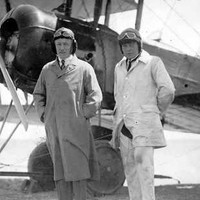 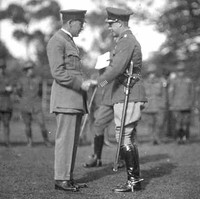 Captain Harry Butler meets the Prince of Wales during a function at Adelaide’s Jubilee Oval, 1920