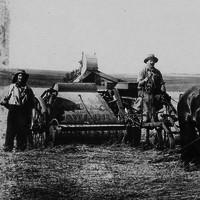 John Frederick May was born in 1840 in Perranzabuloe, Cornwall, England, the son of copper miner Henry May and his wife Mary Ann (née Trenery). He had little schooling and worked in the Cornish mines from an early age. In 1858 he emigrated with his family to South Australia aboard the Melbourne, with no qualifications other than an uncanny gift for engineering. The family settled at Burra and May worked in the copper mines, his ability at solving engineering problems soon resulting in his promotion to engineer, for which his wage was doubled. He was put in charge of the erection of Morphett’s famous winding engine.

When he visited the Copper Triangle (Kadina, Moonta, Wallaroo) in 1861, he found that he was already known there and was offered the job of engineer of the smelting works at the Wallaroo Mine. On 14th September 1862 he married Mary Ann Mitchell and they were to have eight children. In 1863 he transferred to the Moonta Mine as Superintending Engineer, working under ‘Captain’ Henry Hancock. He held that position for eleven years, during which time he worked on the concentration of ore by mechanical (instead of chemical) means. The automatic jig was first put into operation at the mine under May’s direction and several large pumping and other engines were erected. The machinery department at Moonta became one of the most advanced in Australia, partly due to May’s efforts.

His achievements attracted the attention of Gawler industrialist James Martin and in 1874 May became a partner in James Martin & Co. The firm was already well-known and its fine reputation continued to grow with the added impetus provided by May. The company became successful manufacturers of railway locomotives and railway rolling stock in addition to its range of agricultural implements and mining machinery.

In 1885 May resigned his partnership and, with his brother Alfred, established the firm of May Brothers. Buying land near the Gawler railway station, they designed and built a workshop and a huge smelting works. Specializing in the manufacture of agricultural implements and mining and smelting equipment, May Brothers was an outstanding success. In 1886 the brothers patented stripping and reaping machines. The following July they gained their first order from Broken Hill and from then on were rarely without work from B.H.P. during the time the Barrier mines were developed. May was a recognized expert on the treatment of ores and in 1888 the May Brothers Patent Compound Jig, capable of handling 500 tons of ore per hour, was erected at the Victory Mine near Beltana. Between 1890 and 1895 the brothers patented at least fourteen machines and mechanical items for mining and agriculture. At this time the firm was employing up to 250 men.

After his wife died in June 1896, May arranged to be relieved of the oversight of the extensive works and on 14th October 1897 he married a widow Margaret Maxwell Dick (née Aitchison). They set up home at Semaphore but May died there only two months later on 15th December. He was buried at the Willaston Cemetery, Gawler. Both the May Brothers and Martin works closed for the day and hundreds of workers marched in the biggest funeral procession ever seen in the town. The employees of May Brothers presented a large framed photograph of Frederick May to the Gawler Institute as a memorial.

Fred May was the archetypal ‘quiet achiever’. Many of his achievements were made while in the employ of others, who therefore enjoyed the resulting fame and success. He was qualified to be nothing more than a miner but his value to a developing South Australia was considerable --- as an engineer, manufacturer and inventor, as well as the employer of hundreds of workers. 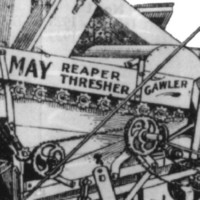 Advertisement for the May Brothers Reaper Thresher in the Gawler Bunyip, c. 1895. This device was co-invented by Frederick May 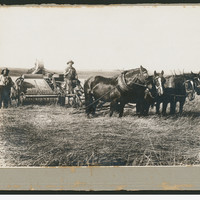 Image courtesy of the State Library of South Australia, SLSA: B 16768, Public Domain.

You can also find this book for sale on Ebay, If you search for May Brothers you should find them pop up

Read an article today on ABC Online
http://www.abc.net.au/news/2016-02-28/forgotten-genius-frederick-may-rem...
about a book published in his recognition.
Any idea's where I would purchase same ?

They appear to be selling it online Dave: http://orders.openbookhowden.com.au/YourBooksOnline/products/product.asp...

Whitelock, D., Gawler, Colonel Light’s country town: A history of Gawler & its region (Gawler: Corporation of the Town of Gawler, 1989).

Commemorated by:
J150 Plaque, Frederick May