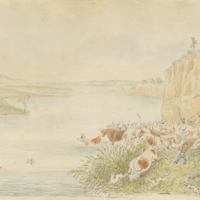 George Hamilton's painting of crossing cattle over the River Murray, 1939
1839

Scott was appointed magistrate and sub-protector of Aboriginals at Moorundie in the Murray Region.
1869

Scott remained as superintendent of the Yatala Labour Prison until he retired to Currency Creek.
1909

Edward Bates Scott was born in Kent, England, arrived in New South Wales in 1838 and, in the following year, helped George Hamilton overland cattle to Adelaide. Scott accompanied Edward Eyre on several expeditions before establishing a cattle station on the North West Bend of the River Murray. In 1847 he was appointed magistrate and sub-protector of Aboriginals at Moorundie in the Murray Region, a position previously held by his friend Eyre, and served until the post was abolished in 1856. Returning to pastoralism, Scott went bust in the drought of the mid 1860s. In 1867 he served briefly as acting protector of Aboriginals. Scott exhibited an understanding of Aboriginal traditions and a sympathy for their point of view, unusual for the period and which put him at odds with the missionary George Taplin of the Point McLeay mission (Raukkan). Appointed superintendent of Yatala Labour Prison in 1869, Scott remained in that position until 1892 when he retired to Currency Creek. 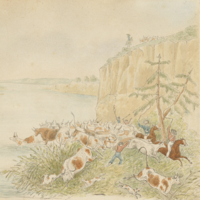 Image courtesy of the State Library of South Australia, SLSA: B 70379, Public Domain