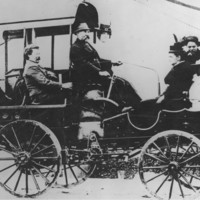 David Shearer dedicated his life to the manufacture of farm machinery but is usually remembered for the steam car that he built as a hobby in the late 1890s. He was born on 7th November 1850 in the Orkney Islands, Scotland, the son of stonemason and blacksmith Peter Shearer and his wife Mary (née Kirkness). In 1852 the family emigrated to South Australia aboard the Omega and settled in the Clare Valley. After leaving school, David and his brothers, William and John, took up blacksmithing as a trade, purchasing their own businesses.

David and John entered into a partnership in 1877, establishing an agricultural implement factory at Mannum which produced ploughs, harrows, wagons and general blacksmithing items. Their first wheat stripper was built in 1883 and on 28th February of that year David married Mary Elizabeth Williams; their family consisted of two sons and a daughter. In 1888 John invented and patented wrought-steel ploughshares, which became a major product for the firm. He later visited the Meadows Steel Co. in England to obtain information about a particularly resilient form of steel and this subsequently became the back-bone of all future Shearer implements.

In the 1890s David Shearer designed and built a steam-driven car (or, as it was described at the time, a ‘horseless four-wheeled carriage’). According to the Chronicle, it had its first official road trial on the 5th June 1899. It could carry eight passengers and the running cost was estimated at less than a penny per mile for wood and water. Almost everything for the Shearer car was made at Mannum. David’s nephew, John Albert Shearer, built the motor, which was a twin-cylinder steam engine, developing 15 horse-power and propelling the car easily at 15 miles per hour. In 1900 David was invited to display the car at the Adelaide Chamber of Manufactures Exhibition. It was driven to Adelaide with John at the controls while David tended the boiler, with members of their families and the housekeeper as passengers. David travelled many miles in the car before retiring it to a shed at his factory. The engine and boiler were then removed and installed in the launch Keith until 1924 when David retrieved them with the intention of reconstructing the car with pneumatic tyres to see what effect it would have on its performance. The Shearer steam car was donated to the National Motor Museum at Birdwood in 1975 and, after full restoration by the Sporting Car Club of South Australia, has taken part in many veteran and vintage car rallies, including the famous ‘London to Brighton’.

The Shearers maintained a wharf on the banks of the River Murray for loading machinery onto paddle steamers for delivery to the railway at Murray Bridge. David gave evidence to the Commission on Railways in 1904 and to the Parliamentary committee in 1916 in support of a train line to Mannum, but to no avail. The railway never came. The manufacture of tillage and seeding implements was transferred to Kilkenny under the management of John in 1904, while David stayed at Mannum, concentrating on the manufacture of harvesting machinery. Their partnership was dissolved in 1910.

David Shearer was also interested in astronomy, constructing an observatory adjacent to his home, and was a keen artist, producing works in oils, water colours and crayons. He was a Freemason and an active member of the Mannum community, serving on the Council for forty years as a Councillor and at times Chairman. He was also a member of the local Institute Committee, Progress Association, Hospital Building Committee, Rowing Club and Rifle Club. He earned himself the title of ‘Mannum’s Grand Old Man’.

He died on 15th October 1936 and was buried at West Terrace Cemetery. He is commemorated by the David Shearer Sports Park at Mannum. His son Crawford succeeded him in the management of the firm and in 1972 the Mannum plant was taken over by Horwood Bagshaw. 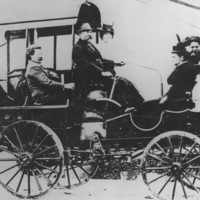 David Shearer and his family ride in a steam carriage constructed by Shearer, c. 1898 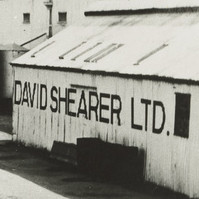 Harvesters lined up outside the Mannum factory of David Shearer Ltd., 1910

Does Shearer's observatory still exist? Are there any photographs available of it? Has anyone researched Shearer's astronomical activities? I have a strong interest in nineteenth and early twentieth century Australian astronomy.

The building itself has heritage status but I'm not sure what condition it is currently in Wayne:
http://maps.sa.gov.au/heritagesearch/HeritageItem.aspx?p_heritageno=16311
https://www.flickr.com/photos/82134796@N03/9156307829

You can find some more on David Shearer here - http://adb.anu.edu.au/biography/shearer-david-8526 but I'm not sure about further work on his astronomical activities.

Hi Lynn,
I've consulted my colleagues on this one and Pauline suggests contacting the following organisations:
Roseworthy Agricultural Museum
http://explorehistory.com.au/organisation/roseworthy-agricultural-museum

Good luck with your research!

Linn, R., The river flows: A history of Mannum on the River Murray (Blackwood: Mid-Murray Council, 1997).