In 1907 Charles Witto-Witto Cawthorne wrote, ‘Scarcely a week passes but what we hear is said by people of all ages: “I wish I knew something about music and could play or sing.” They have realized when too late that a musical education is as desirable for everyday life as knowledge of the three Rs.’

Charles Cawthorne was born in Adelaide on 30th June 1854, the eldest son of William Anderson Cawthorne and his pianist wife, Maryann Georgina (née Mower). William had arrived in South Australia in 1841 and established the Victoria Square Academy where he taught until 1862. He showed great interest in the Aboriginal people and published two books concerning their customs and traditions. Charles’ second name, Witto-Witto, is presumed to be a fictitious Aboriginal name. In 1862 William published Who Killed Cockatoo?, claimed as being the first Australian picture book for children. The poem is based on the English nursery rhyme ‘Who Killed Cock Robin?’ and was written to introduce children to Australian birds and animals. William was also a watercolourist and owned a newsagency which, in 1884, became Cawthorne & Co. with his son Charles as a partner.

Charles was fourteen when he began studying piano, violin and bassoon, and at eighteen was conducting the Adelaide Amateur Orchestra. In the early 1890s he formed a band of fifteen performers known as the Adelaide Orchestra and in 1893 this became the nucleus of Herman Heinicke’s Grand Orchestra. It was extremely popular and by 1896 was presenting thirteen concerts a  year. Cawthorne remained bassoonist, secretary, treasurer and later business manager in Heinicke’s various orchestras.

On 9th September 1885 he married Amanda Dorothea Lellmann and they had four sons. In 1887 Cawthorne composed waltzes which were performed at the Adelaide Jubilee Ball and he advertised his business in 1889 as ‘music-sellers, booksellers, importers of artists’ materials, terra-cotta and opals’. Later, musical instruments were sold and the firm acted as a box-office for most musical events in Adelaide. By 1896 Cawthorne was handling sheet music from 60 overseas publishers. Sitting at the piano he threw on the floor those he considered ‘rubbish’. The firm also began printing and publishing original compositions.

Cawthorne continued to organize, conduct and perform in musical entertainments. In 1910 he was the founder and conductor of the Adelaide Orchestral Society and also promoted and managed concerts for the Adelaide Choral Society, the Bach Choir and the Adelaide Glee Club. In 1911 he moved his business to what became Cawthorne’s Building at 17a Rundle Street, Adelaide, and when war came in 1914 he leased the German Club, which became Queen’s Hall, a venue for patriotic concerts. In 1924 the family firm became a limited company with Cawthorne’s eldest son, ‘Gus’, who had joined the firm in 1903, as managing director. Two other sons were also directors.

Hooper Brewster Jones, writing in Progress in Australia (1934), said that Charles Cawthorne was one of the most dynamic personalities in the musical life of Adelaide during the early years of the twentieth century. He was responsible for the introduction of Peter Dawson to his first teacher in 1898. The portly Cawthorne was an able raconteur and a genial influence upon the musical life of the community, his breezy personality attracting musicians from all over Australia for his various musical entertainments. He made a point of encouraging young, talented musicians and helped to raise money to enable them to study overseas.

He died on 26th June 1925 and was buried at North Road Cemetery. Image courtesy of the Cawthorne family. Not to be reproduced without permission 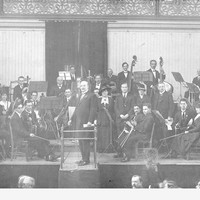 A large symphonic orchestra assembled at the Exhibition Building, 1918. Charles Cawthorne is standing at right-centre of image