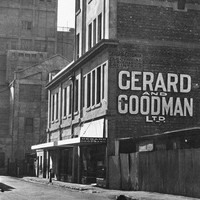 After working a number of different jobs in his youth, Gerard joined an Adelaide-based flour mill, where he served as an engineer and driver in charge of the mill's electric lighting plant.
1907

While working at the flour mill, Gerard recognised opportunities in the electrical industry and took out a loan with his father-in-law to start his own merchandising and contracting business on Rundle Street.
1909

This organisation played a significant role in the development of the electrical industry in South Australia and is today known as the Electrical Wholesalers Association.
1920

Gerard designed a fitting that connected all sizes of imported electrical conduit, and offered his product at a lower price than overseas suppliers. His 'one size clips all' fitting served as the genesis for the famous brand name 'Clipsal', a business that still exists to this day.
1929

Gerard had a keen interest in the plight of Indigenous peoples, and was a founder and President of the United Aborigines' Mission, which supported a number of mission stations throughout South Australia.
1945

As part of his initiatives to help South Australia's Indigenous peoples, Gerard financed the purchase of 5,800 acres of land at Winkie on the River Murray. This property is now known as the Gerard Aboriginal Community.
1949

Alfred Edward Gerard was born on 11th August 1877 at Aberdeen, near Burra, South Australia, the son of labourer William Gerard and his wife Emily (née Russell). In his early years he worked for a coach builder on the Western Australian railways, as a warehouseman, a bread carter, a storeman in the Kalgoorlie goldfields, a station master and as the owner of a camera shop. By 1900 he had moved back to Adelaide and joined a flour mill, working as an engineer and driver in charge of the electric lighting plant. On 26th March 1902 he married Elsie Maria Goodman and they had four sons: Alfred Hubert, William Geoffrey, Kenneth Edward and Jack Hamilton, who all went on to join their father’s business.

It was at the mill that Alfred Gerard began to understand the value of hard work and sought to develop his own niche in Adelaide. In 1907 he recognised the opportunities in the electrical industry and, with a loan of £100 from his father-in-law, started a merchandising and contracting business in the rented basement of a bicycle store at 204 Rundle Street. He called the business Gerard & Goodman and served as its Chairman and Managing Director for forty-three years. In the early days Adelaide passers-by took little notice of the gentleman who rode into sight on his bike, balancing lengths of conduit and a stepladder on his shoulder. They could not have known that he was laying the foundations for one of the greatest manufacturing stories that South Australia has seen.

Prior to 1920 all the available electrical conduit used in Australia was imported from overseas, and Australian electricians experienced difficulties in joining sections of it because the diameters of the various fittings did not match. Gerard seized the opportunity to manufacture a fitting that was easier to use and to offer it at a lower price than the expensive imports. The unique fittings suited all sizes of imported conduit --- one size ‘clips all’. And so Gerard’s famous brand name was born. ‘Clipsal’ began production in 1920 with just six employees but within a short time the brand was respected throughout Australia and the operation had moved several times to larger and larger premises. The company headquarters eventually settled in Bowden in 1936 and in the years that followed the firm produced a formidable range of products. Of great importance to Alfred Gerard was the need to maintain good relations with manufacturers and suppliers, and the goodwill generated through his close personal contacts was of inestimable value.

In 1909 Alfred Gerard had formed the South Australian Electrical Importers & Suppliers Association which played a major part in the development of the industry and is now known as the Electrical Wholesalers Association. His company also brought many firsts to Adelaide. Television, for example, was first displayed in Adelaide at Gerard & Goodman’s shopfront window in Rundle Street from 30th May to 2nd June 1949. The spectacle drew large crowds but it was another ten years before permanent broadcasting was brought to the city.

A concerned humanitarian, Alfred Gerard was a lay preacher and a member of the Prospect Masonic Lodge. He also took a keen interest in the plight of indigenous Australians and in 1929 was a founding member and local President of the United Aborigines’ Mission, which supported a number of mission stations throughout South Australia. In 1945 Gerard financed the purchase of a 5,800-acre property at Winkie on the River Murray, now known as the Gerard Aboriginal Community.

Alfred Gerard continued to contribute to the family company until his death on 13th October 1950. He was buried at Payneham Cemetery. 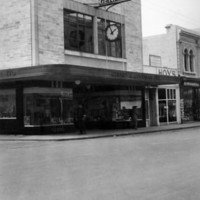 Image courtesy of the State Library of South Australia, SLSA: B 8202, Public Domain 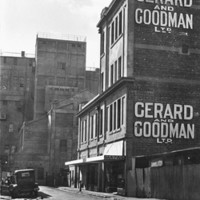 Image courtesy of the State Library of South Australia, SLSA: B 4773, Public Domain