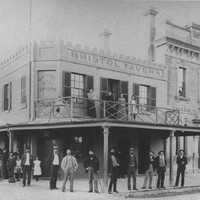 The UTLC was formed to coordinate trade union activities.
c. 1890

The council was entirely male until two women from the Working Women's Union joined the 48 men.
1891

However, disillusion soon followed the election when, during a wave of strikes, the government protected strikebreakers and jailed union pickets.
1931

When Labor premier Lionel Hill endorsed the deflationary Premiers’ Plan, this prompted a split in the party.
2000

Carpenters, tailors, bakers, carriers, cordwainers and coachmakers had formed unions within ten years of European settlement of South Australia, and by the 1870s there were thousands of union members in the colony. In 1884 the UTLC was formed to coordinate union activities. Within two years 20 unions representing 4000 members had affiliated. Important issues included defending gains, particularly hours of work. The council was entirely male until two delegates from the Working Women’s Union joined the 48 men in the early 1890s.

Initially lukewarm about direct political representation, the defeat of the national maritime strike in 1890 helped galvanise the council to form the United Labor Party (ULP) in 1891. However, disillusion with the first Labor government, elected in 1910, was swift when, during a wave of strikes that year it protected strikebreakers and jailed union pickets. The First World War eventually split the movement: most members of the UTLC opposed conscription but most Labor MPs favoured it, and left to form a new party. The union-backed rump of the ULP in South Australia changed its name to Australian Labor Party and temporarily adopted a socialist objective.

Labor split again when Labor premier Lionel Hill endorsed the deflationary Premiers’ Plan in 1931. With 30 per cent unemployment and dramatic reductions in membership, the council was generally a passive defender of wages and conditions. Its members were trapped for a night in Trades Hall in Grote Street, Adelaide, besieged by unemployed men furious that the council would not support their call for strike action.

There was patriotic cooperation during the Second World War, but when hostilities ended militants led the UTLC in coordinating major tram, rail and gas strikes. Then Cold War anxieties saw new leaders adopt more conciliatory attitudes. Through the 1950s Premier Tom Playford attracted industries by comparing the few days lost to strikes in South Australia with ten times the number lost in the eastern states. Throughout the prosperous 1960s and 1970s the council worked for shorter hours and equal pay.

While the UTLC once represented mainly blue-collar workers, it now includes police, nurses and teachers. In the 1980s membership took a huge leap, but by the end of the 1990s high unemployment and legislation aimed at weakening union strength had taken their toll: 86 unions representing 170 000 members in 1986 had diminished to 33 unions with 130 000 members in 2000. 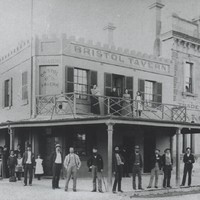 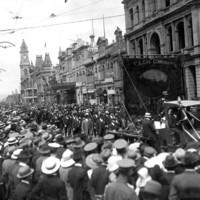 Associated with:
Defence Science and Industry