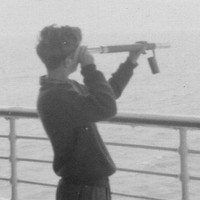 My family - mum, dad, and four children - came out to Australia in 1959 as assisted migrants from UK. The Elder Park Migrant Hostel was our first experience of a new life in Australia. My memories of the hostel are like flashes of lightening illuminating a landscape that is now almost too far away to make out. I have tried to rebuild our experiences of that momentous time with the memories from all of my family and photos taken by my sister.

My family - mum, dad, and four children - came out to Australia in 1959 as assisted migrants from UK. The Elder Park Migrant Hostel was our first experience of a new life in Australia. My memories of the hostel are like flashes of lightening illuminating a landscape that is now almost too far away to make out. I have tried to rebuild our experiences of that momentous time with the memories from all of my family and photos taken by my sister.

The fifties were a very different age without the convenience of jet travel. We left a tiny Sussex village, journeyed on Orontes, a P&O ocean liner, to a city on the other side of the globe – a trip which took five weeks. It was an emotional experience for all of us as the ship left Tilbury dock. Streamers, thrown between the immigrants and those left behind, were slowly torn apart symbolising a separation, much more profound than today because of the far greater expense and time required to return to the UK. Built in 1929, Orontes was itself the survivor of the age of elegant ocean travel. Although we were “ten pound poms” we had what had been previously a first class cabin because we were a large family. Orontes was almost unimaginable luxury: the ship had shops, a theatre and elevators. Waiters served us in elegant dining rooms. But Orontes didn’t have air conditioning, so on hot nights most of us slept on the decks to catch the breezes.

Fremantle provided our first view of Australia. We were shocked to see children not wearing shoes.  Palm trees made me think we must be in the tropics – but they were date palms.

We arrived in Adelaide in July and stayed for our first week in a migrant hostel in Elder Park. What a shock! Gone were the waiters, the neatly uniformed sailors and the great public rooms of Orontes. The hostel’s public rooms were reminiscent of a military camp. Our bedrooms were so small that you couldn’t open the door without hitting one of the beds. The sheets and blankets were like brown paper and so light-weight that we draped our coats over the beds at night to try to keep warm. The walls were so thin that you could clearly hear people talking in the rooms next door. We were one family amongst the one million migrants who were brought out on assisted passages and like many before and after us, my parents must have wondered if they had made a terrible mistake.

However, the hostel had an unexpected attraction: the Torrens Lake. Here was a perfect English park where curiously black swans swam along grassed and wooded banks, lined with massed flower borders. Although unexpectedly cold, the weather seemed like an English spring. Within a week we had bought a house in a southern suburb and were surrounded by almond blossom and vineyards. Maybe if we had stayed more than a week in the hostel, we might have been tempted to join the army of poms who started to plan their return home.

Nearly sixty years later we understand why the hostel was a military experience: it had been a wartime 'Cheer Up' hut.  That inexplicable 'SPF Hostel' over the door came from the words ‘Schools Patriotic Fund Hostel’ because school children had sold violets for generations in order to raise money to build these hostels for soldiers, either passing through or returning. No wonder it was such a rude shock after the elegant luxury of Orontes.

By 1970 the hostel was demolished to make way for Australia’s first multi-purpose arts centre. But we still remember through those lightning flashes of memory, the delight of a Balfours Bun and the cold mashed potatoes and those freezing empty rooms lit by a few bare light bulbs. 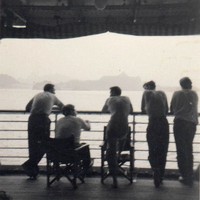 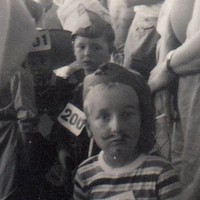 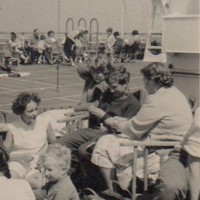 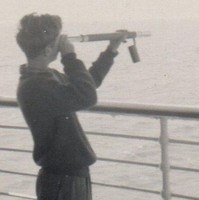