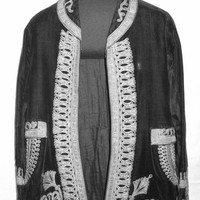 Little is known about the origin of this jacket, although it is clearly an expertly sewn and embroidered item similar to many from Northern India, Afghanistan and the Eastern Islamic world. The jacket was given to Mr Frederick Budge of Farina, South Australia, by a Muslim (‘Afghan’) trader he knew who went on a pilgrimage to Mecca, at some time in the 1890s. The gentleman had promised Mr Budge a turban, but on returning presented him with this beautifully embroidered jacket instead.

Mr Budge ran the JW Manfield general stores in Marree, Farina, Oodnadatta, Innamincka & Birdsville. He frequently traded with the famous ‘Afghan’ camel train drivers who transported goods in the region.  While some of the cameleers of South Australia were from Afghanistan, many were from North India, Egypt and Turkey and other locations.  They played an important role in the opening up of the Outback, taking their camel trains over terrain far too rugged for other animals or vehicles.

This very beautiful garment is significant as a rare piece of material history representing the Muslim community from the 19th century British colony of South Australia and the important role that community played.  It is also significant due to its provenance and associations with a well-known South Australian trader. 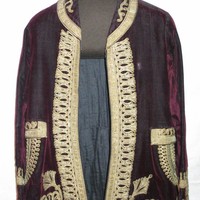 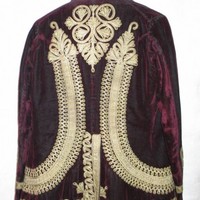