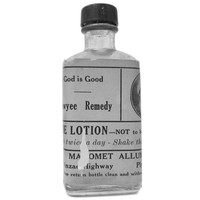 (a)        A small, oblong, clear glass bottle with screw top. There is a green coloured paper  label on the front of the bottle with the words ‘God is Good, Dewyee Remedy. The Lotion – Not to be taken. Rub twice a day – Shake the bottle. Mahomet Allum, 68 Anzac Highway Plympton. Please return bottle clean and without label’ in black print and a black and white photograph of Mahomet Allum in the top right hand corner. The bottle contains pale yellow liquid.

Robert Brown donated two bottles to the Migration Musuem. His cousin used to visit Mahomet Allum, the herbalist, with her mother. This bottle was believed to have been bought around 1941-2, but was possibly purchased later in the 1950s when Allum moved to Anzac Highway. This bottle and it’s contents were part of the alternative medicine supplied by Mahomet Allum , an Afghan cameleer, who settled in Adelaide in the 1920’s and became a famous herbalist and philanthropist.

This bottle provides a good illustration of Mahomet Allum’s role as a herbalist and purveyor of alternative medicine in South Australia in the first half of the twentieth century. 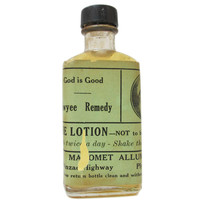 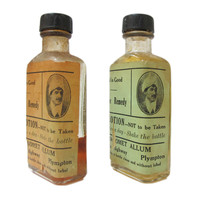