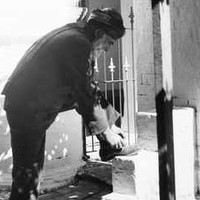 Far from their place of origin in Afghanistan, Baluchistan and northwest India (now Pakistan), Muslim cameleers and merchants celebrated the end of Ramadan in 1892 Adelaide with music improvised on a tambourine and banjo. They danced in the glow of a flaming torch, so large that it had to be frequently replenished with oil.

The festivities on this particular night were the culmination of up to nine days of religious observances. The Observer newspaper of 14 May reported that a crowd of curious onlookers gathered outside the Adelaide Mosque in Little Gilbert Street to watch the celebration.

The first Islamic festival to be publicly recorded in Adelaide commenced on 27 July 1890 in the newly constructed mosque. Caretaker and spiritual leader Hadji Mullah Merban described the ceremonies in the Observer of 2 August. The paper noted that the commencement was a great day for the ‘Mohammedans’:

They are required to offer up their prayers en masse, and the next day sacrifices are made. If 9,999 worshippers are not represented Allah sends down his angels to make up the total, otherwise the offerings would not be acceptable. Tuesday, which was the Hadji day and corresponds to our Christmas, over eighty Afghans and one Hindu worshipped at the mosque, performing all the necessary ablutions and ordinances required by the Koran.

On 23 June 1894 the Observer again noted that the ‘followers of Mohammed in Adelaide–and there are a goodly number–have been celebrating a great religious festival known as Hadji Day’. The festival was spread over seven days:

The Mosque in Little Gilbert-street was constantly attended by the devotees of the rugged and thoughtful Arab, whom Carlyle has ranked among his heroes … The event kept most prominently in remembrance is the offering up of Isaac by his father Abraham. At this time all Mohammedans who can afford it sacrifice sheep or cattle, the meat, after the animal has been offered as a token to the Almighty, being distributed among the poorer Islamites (sic).

The reporter praised the piety of Muslim people:

In every country where the disciples of Mohammed reside last Thursday was scrupulously observed. In every Mosque or on every hill where they gathered the men prayed for purification from sin … On Saturday some sixty-seven turbaned residents of Adelaide attended the Mosque …

Fasting and ceremony associated with Ramadan were reported in 1898 in association with the visit of ‘Mohammedan Missionary’ Mirza Khan from Western Australia. Fasting had begun on 25 January and ended on Thursday 26 February. Mulla Mirza Khan wrote:

Thursday was ‘Aeedul fitar’. Aeedul means rejoice or pleasure. This is one of the greatest holidays amongst Mohammedans, and they are fulfilling the command of God to remember the day on which the first man, Adam, was made. There are generally great gatherings in ‘masjads’ for prayers, and it is a Mohammedan rule that every follower must join in prayer in the ‘masjad’ on Juma, or Friday.

Islamic celebrations made a great impression on local residents. Wally Lockett, who lived around the corner in Gilbert Street and whose grandfather John Lockett made ironwork for the mosque and whose father made wagons for ‘Syrian’ or ‘Afghan’ outback traders, recalled:

At different times of the year they used to have a continental there and they had a rope going up and they’d pull their flags up, and there used to be a lot of Affies [Afghanis] there and they used to be camel drivers up the North and they’d come down here when they wanted a holiday like. It was a rest home for them. Oh they’d have a big continental there, the noise would go on.

Newspaper reports of observances largely ceased after the 1890s. But Islamic services and festivals continue to be celebrated at the Adelaide Mosque, the oldest surviving mosque in Australia. 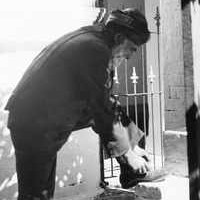 Bejah Dervish removing his shoes for prayer at the Adelaide Mosque, 1937
Courtesy of/Photographer:News and Mail photographer

Image courtesy of the State Library of South Australia SLSA: B7287, Public Domain