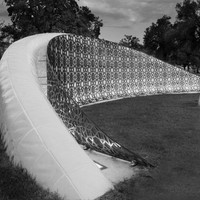 Voyagers glows softly in the evening, patterned light shining through its geometric meshwork and reflecting off a curved backdrop of rippled tiles.

This artwork celebrates the ‘Afghan’ heritage of Adelaide. It commemorates cameleers who came to South Australia from Afghanistan, Baluchistan and areas of northwest India (now Pakistan). Its form alludes to the cultures of these men and their lives in Australia.

From the 1860s migrant cameleers and imported camels provided transport for explorers, the growing wool industry and stores in the Outback. They were a vital part in building the Overland Telegraph Line from Darwin to Adelaide, completed in 1872. Some became merchants and bush traders once their cameleer contracts were finished. Several lived in the southwest corner of Adelaide, building the Adelaide Mosque, the oldest surviving mosque in Australia. While many returned to their places of origin, some lived out their lives in South Australia and were buried in remote towns or the Muslim section of West Terrace Cemetery in Adelaide.

The artwork was designed by South Australian Shaun Kirby and his company Thylacine Art Projects. Its crescent shape reflects the sand dunes of South Australian deserts and the moon associated with Islam. The rippled tiles of the curved wall were produced by hand in the ceramics department of the Jam Factory. They suggest wind-blown patterns in sand. In front of the wall a laser-cut, red metalwork screen features traditional Islamic patterning. Up-lights between the wall and the screen enhance night viewing. The small marble obelisk sitting at the centre of the work carries the names of the destinations that cameleers travelled to and from. On the advice of cameleer descendants destinations are written in Urdu (rather than Pashtun or Arabic). The work faces in the direction of the Adelaide Mosque nearby in Little Gilbert Street.

Voyagers was launched on 11 December 2007 at 8pm so that the lit installation could be appreciated. The event was organised in consultation with the Australian Outback Afghan Camelmen Descendants and Friends Memorial Committee. Free camel rides were offered. Afghan music played and gifts (small parcels of dates and dried fruit) were supplied by members of the committee. No alcohol was served out of respect for Islamic culture.

The gathering was addressed by David Kerr of the South Australian Museum and a member of the Public Art Roundtable that had been involved with the development of the work. Lord Mayor Michael Harbison launched the installation. Janice Noyce and Mona Wilson (cameleer descendants) explained the cultural significance of the gifts. 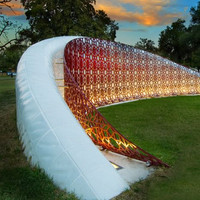 Voyagers in Whitmore Square. The artwork was launched on 11 December 2007.

Courtesy City of Adelaide Archives. Not to be reproduced without permission.