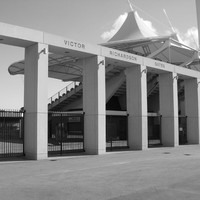 In 2003 the gates were relocated northwards with towering concrete pillars and a capping beam.
2012

Gates removed with a view to being repositioned.
2014

Although variously employed as a public servant, salesman, representative, sports journalist, sports editor, and radio and television sports broadcaster, it was as a sportsman that Richardson was a household name in the days before sport became an occupation. Predominantly a cricketer and Australian Rules footballer, he also played tennis, golf, basketball, baseball (state level in 1921) and lacrosse (district level in 1921) and did gymnastics.

The five iron gates were set between rectangular arches. Those each side of the centre featured two double-sided bronze reliefs created by sculptor John Dowie. The relief on the southern side depicted groups of football players vigorously competing for the ball during a game. The northern relief showed cricketers batting, bowling and fielding. Richardson’s features could be seen on the batsman facing at the crease (Cameron, p131).

In 1965 Lord Mayor James Campbell Irwin, an Adelaide architect, initiated moves to honour Richardson. The next year a public appeal supported by the South Australian Cricket Association (SACA) and the South Australian National Football League (SANFL) raised funds for a commemorative feature in the city. Gates at Adelaide Oval were selected as an appropriate tribute. A small road leading to Adelaide Oval from King William Road was named Victor Richardson Drive in 1966.

Architect Ian Hannaford supervised the design and construction of the gates. The reliefs by John Dowie were added when more than £5000 was raised.

Lord Mayor Walter Bridgland officiated at the opening ceremony on 28 October 1967. Alderman Irwin opened the gates. Guests included the SACA and SANFL presidents, Sir Donald Bradman and Don Brebner. The ceremony was held during a lunch break at a Sheffield Shield game, enabling the South Australian and Victorian Sheffield Shield teams to form a guard of honour each side of the dais. Among them were two of Richardson’s grandsons, Ian and Greg Chappell, notable South Australian and Australian cricketers in their own right.

The central bronze plaque, installed following the death of Richardson two years later, records some of his significant sporting achievements and the admiration of many people.

When the Chappell Stands were built on the eastern side of Adelaide Oval in 2003 the gates were dismantled and relocated slightly northwards with a sandblasted and honed colonnade of towering precast concrete pillars and a capping beam replacing the original metal framework. The stands, named in honour of Richardson’s national cricket team grandsons (Ian, Greg and Trevor), were demolished in April 2012 and the Victor Richardson Gates were repositioned at the revamped stadium in March 2014. 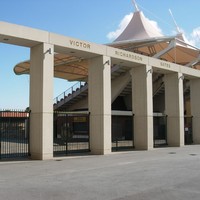 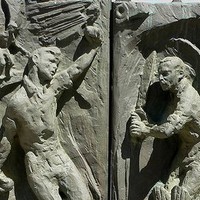 Courtesy of/Photographer: Mowling. All rights reserved. Not to be reproduced without permission 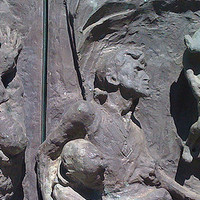 Courtesy of/Photographer: Glen H. All rights reserved. Not to be reproduced without permission 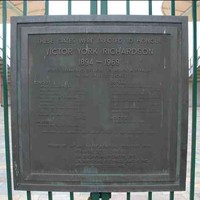 Close view of the plaque on the Victor Richardson Gates at the Adelaide Oval. 2006
Courtesy of/Photographer:Jenny Scott

Courtesy of/Photographer; Jenny Scott. Not to be reproduced with out permission.