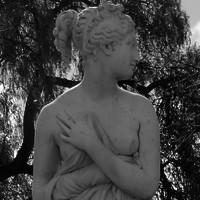 Moved to outside the South Australian Museum
1960

Venere di Canova (Canova’s Venus) was Adelaide’s first public street statue. The first of three statues donated to the city by wealthy pastoralist, mining magnate and parliamentarian William Austin Horn, it was unveiled on 3 September 1892. His other donations were Hercules and The Athlete.

The sculpture of the partially draped Venus had a mixed reception when it was first erected. Some Adelaide residents objected to her lack of clothes. One letter to a newspaper complained about ‘the public exhibition of an indecent statue’. It was deliberately placed near the guardhouse of Government House to discourage vandalism.

But Venere di Canova also had support. One fan, Arthur Bagot, wrote to the Advertiser to emphasise its connections and value, noting that there were already three copies of the Venus sculpture by Canova: one was owned by the Queen; another was in Venice; and the other was owned by CB Norcliffe of Langton Hall, Yorkshire. His friend Norcliffe had been offered £15 000 for his sculpture. Speakers at the unveiling uniformly praised her smooth beauty and grace.

Apart from aesthetic and moral considerations, there was also debate about the best location for the statue. Some were concerned that the white marble would discolour if left out in the open. However, William Horn was adamant. He wanted the statue placed where it could be viewed by the general public. The South Australian Register of 5 September 1892 reported his comments at the unveiling: ‘To have put the statue within the sacred precincts of the Town Hall for a privileged few to see occasionally or to have sent it to the Art Gallery would not have suited the object he had in view when he presented it. His purpose was to induce a love for the beautiful in art, and to make the public familiar with it’.

In accordance with Horn’s wishes, the City Council placed Venere di Canova in a prominent position at the corner of King William Street and North Terrace, facing southwest.

The statue was unveiled by Mayoress FW Bullock on 3 September 1892. Mayor Bullock gave the opening address in which he praised the statue and the donor. Clearly worried about the safety of the work, he also called ‘upon every citizen to regard himself as a special constable, bound in honour and duty to protect this chaste and graceful piece of statuary from the dangers of larrikinism and vandalism’.

Premier Fredrick Holder thanked Horn for his generosity and hoped that the statue would ‘serve to cultivate the love of art in South Australia’. In his speech he urged other (wealthy) members of the community to contribute to public art in recognition of the advantages that they had gained from the colony.

Venere di Canova is a copy of the Italian Venus (Venere Italica) by the Florentine sculptor Antonio Canova (1757–1822) which is in Pitti Palace in Florence, Italy. The Pugi brothers, copyists of Florence, carved it for William Horn.

Canova in particular popularised the neoclassical style in sculpture, which drew upon the classical art of Ancient Greece and Rome. Neoclassical sculpture was characterised by idealised forms, smooth lines and stillness. Canova’s work was typified by delicate, graceful nudes. Venus, startled as she steps from her bath, was a common theme in classical Greece sculpture.

The life-sized Venere di Canova is made of white Carrara marble. She stands on a base of Sicilian marble, elevated on a pedestal of Kapunda stone.

The statue was shifted to outside the South Australian Museum during an upgrading of Prince Henry Gardens in 1930. Venus returned to the west of Kintore Avenue in 1960 to make way for the Bonython fountain (since removed).

Hercules has been relocated over the years too. Unveiled on 4 October 1892 in Victoria Square, it now sits in Pennington Gardens. The Athlete, a figure of a youth running, was placed in Brougham Place, North Adelaide, opposite the Children’s Hospital. However, it was subjected to several acts of vandalism before reportedly ‘disappearing’ in 1930.

William Austin Horn (1841–1922) was born in New South Wales and moved to South Australia with his parents in 1852. He worked on the Wallaroo property of Walter Watson Hughes where copper was discovered in 1861: he was the employee Hughes asked to race to Adelaide to lodge a mining claim in advance of a rival syndicate. This claim led to the rich Moonta Mine in which the fortunate Horn bought shares. He went on to buy several pastoral properties in South Australia and New South Wales, including near Broken Hill. When silver was discovered in the Barrier Ranges he became a director of the Silverton Mine. Horn was also a founding shareholder in the prosperous Broken Hill Proprietary Co. and a director of the Kuala Selangor Rubber Co. with interests in Papua, Malaya, India and Sri Lanka.

Horn studied classics at Worcester College, Oxford while in England in 1872–74. His love of the classics was manifest in his donated sculptures. In 1887 Horn was elected to the South Australian parliament as an independent. He retired from politics to write and sculpt in 1893. A keen bushman, Horn travelled extensively through the Outback and funded expeditions such as the Horn Scientific Expedition to the MacDonnell Ranges in 1894. He was a board member of the Bank of Adelaide and of the Public Library, Museum and Art Gallery. William Horn and his family migrated to England in 1898 where he died in 1922. 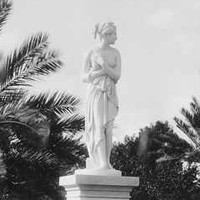 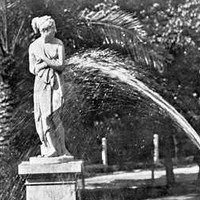 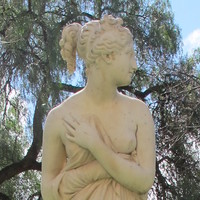 Associated with:
Farnese Hercules
The Athlete

Associated with:
Yarn bombing in Adelaide