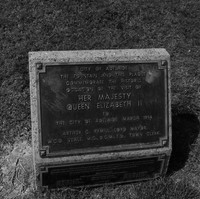 The idea to construct a fountain in Torrens Lake to celebrate South Australia's centenary is proposed to the Adelaide City Council.
1936

The Adelaide City Council rejects the proposal of constructing a fountain in Torrens Lake.
1953

Plans for a fountain in Torrens Lake are approved in celebration of the expected visit from the Royal family.
1954

The fountain is tested before the public. 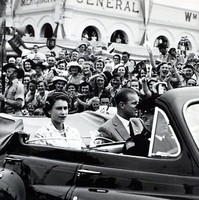 Queen Elizabeth II and the Duke of Edinburgh visit Adelaide and witness the spectacular fountain.
2006

The Fountain is Restored

The Torrens Fountain is replaced with a newer model.

The Torrens Lake Fountain commemorates the first time South Australia was visited by a reigning monarch, Queen Elizabeth II in 1954. Between the 1930s and 1950s there was much debate in the Adelaide City Council about whether to proceed with the proposal to construct an ornamental fountain in the Torrens Lake. It wasn’t until 1953 that the Adelaide City Council agreed to the construction of a fountain at Elder Park as a permanent reminder of the Queen’s visit.

Debate Over the First Proposal

In 1936 meetings of the Adelaide City Council favoured the proposal to construct an ornamental fountain in the Torrens Lake. It would serve as a contribution to the South Australian centenary celebrations. The site for the fountain was selected by city engineer, Mr WCD Veale, who believed the site between Adelaide Bridge and Morphett Street Bridge, 137m west of the landing stage in Elder Park would be the ideal location. The fountain was expected to be one of seven cascades which would spout water at varying heights and be illuminated at night in shades of red, blue, green and orange.

The fountain, it is expected, would become one of the most spectacular features of the city (The Advertiser, 20 May 1936)

The City Council, however, rejected the recommendation from the Centenary committee. Reasons included the fear that the necessary construction of a pile foundation, protection tank and pump house would prove to be too expensive. At this time South Australia was recovering from the Great Depression and did not have the £1,700 the fountain proposal recommended. Furthermore, the funds required for power and lighting to keep the fountain running for 1,480 hours of the year needed to be considered. It was not appealing to pay for an expensive fountain that would not run for most of the year. Members of the Council agreed that a fountain would not add to the beauty of the site and its underwater structure would be unsightly when the lake was drained. The proposed height of the fountain was also believed to be ‘dwarfed’ into insignificance by the tall trees and buildings surrounding it. If the Torrens were to flood and become a river, heavier items following the current would destroy the fountain. Moreover, the novelty of the fountain would wear off in time and it was predicted that the fountain would fall into disuse. Other members of council believed a fountain in the Torrens would be a worthy asset for Adelaide in contrast to the small fountains erected in the parklands. Yet general consensus pushed to save money for a fountain in Victoria Square which, it was argued needed something to make it more impressive.

A Visit from the Queen

Installation of the water fountain in Torrens Lake was finally decided upon by the Adelaide City Council in September, 1953. Whilst the construction of another fountain in Victoria Square was still suggested, the expected arrival of Queen Elizabeth II and her husband The Duke of Edinburgh for the following year prompted plans to go ahead in Torrens Lake. A sum of £4,510 was supplied for the fountain and a further £9,500 for the Royal visit celebrations. The fountain was intended to serve as a permanent reminder of the Royal visit. Construction took place in early November, 1953. Previews of the Torrens Lake fountain took place on 3 February 1954 and were believed to be:

One of the most important of the Royal visit decorations (News, 3 February 1954)

The fountain was reported as a great success upon the visit of the Royal family and prompted the consideration for more fountains in the future. The ornamental fountain redirected attention to the fact that Adelaide is one of the driest and hottest capital cities. The revival of old city fountain schemes were greatly favoured. The fact that Adelaide is surrounded by parklands assured the public that the city was well suited to permanent parks dotted with beautiful flora and fantastic fountains. 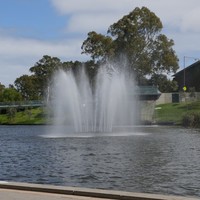 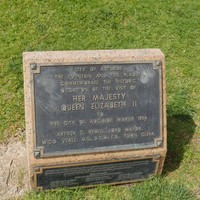 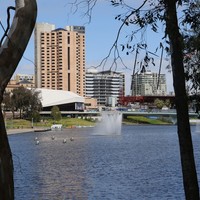 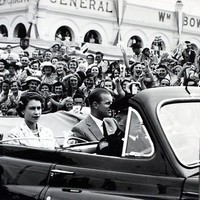 Image Courtesy of The Australian, The Queen Down Under Collection, http://www.theaustralian.com.au/archive/in-depth/it-may-be-the-last-royal-tour-for-queen-elizabeth-ii-who-has-been-the-nations-monarch-for-nearly-60-years/story-fnaivo74-1226167803450