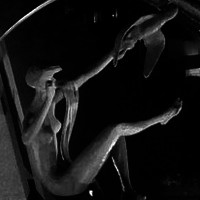 The idea for a commemorative fountain was raised early in 1962 by Adelaide City Council alderman James Irwin. In 1965, after much debate about its location, John Dowie was commissioned to design a fountain for a redeveloped Victoria Square. The design was officially adopted by the Council on 15 February 1967.
1968

The three-sided fountain was first positioned in an 18m-wide hexagonal pool with an outer wall of unpolished Angaston marble at the northern end of Victoria Square.
1968

Switched on by the Duke of Edinburgh

The fountain was switched on by the Duke of Edinburgh on 28 May 1968. He commented ‘although there is not material advantage in having a fountain, it will give future citizens a great deal of pleasure, and no doubt a great deal to argue about’.
2014

Moved to the southern side of Victoria Square

Significant redevelopment of Victoria Square in 2013-2014 saw the fountain shifted.

The Three Rivers fountain commemorates the visit of Queen Elizabeth II and the Duke of Edinburgh in 1963. It is the central component of a redevelopment of Victoria Square that took place in the 1960s.

The idea for a commemorative fountain was raised early in 1962 by architect and Adelaide City Council alderman James Irwin. He argued for a change from the tradition of decorating the city for visiting royalty. Irwin hoped the Council 'will strike a new note and not put streamers and bunting up [but] do something permanent for the City ... the building of a worthy fountain'.

Stimulated by overseas travel, Irwin had a grand vision for new fountains in Adelaide. He wanted fountains in all of the squares and four in the corners of Victoria Square. He envisaged 'squirts of water all over the place', with a spectacular main jet, 'It's got to go right up, 130 feet'.

Some members of the Special Council Committee set up to investigate a fountain suggested closing Victoria Square so that a single large feature could be seen all the way along King William Street. However, this proposal was initially rejected. The committee was correct in assuming that any such proposal would meet with opposition and would 'take years'. It investigated alternative sites on North Terrace, Light Square, Pennington Gardens and in the centre or corners of Victoria Square. It sought advice from the principal of the School of Arts, Allan Sierp, and sculptor John Dowie.

By February 1963 the committee favoured a redeveloped Victoria Square with a large fountain at its heart. The City Council debated the location of a fountain at the top of King William Street, which would be re-routed to accommodate it.

Newspaper reports welcomed a commemorative fountain, but reservations quickly surfaced about any moves to alter the street layout of the square. Editorials and banner headlines fanned public debate. Letters to the editor for and against street changes proliferated. Members of the public were stopped in the street and asked for their opinions.

Organisations such as the South Australian Passenger Services Association, whose members had buses that used the square, opposed the site because it would be a 'serious traffic hazard'. This view was shared by the police commissioner. City traders, led by Mr J F Trim, launched a petition against any moves to re-route King William Street.

At the end of May 1965, after much debate, deferrals and re-costing, the City Council finally determined, on the casting vote of then Lord Mayor Irwin, to close King William Street through the centre of the square. John Dowie was commissioned to design a commemorative fountain.

Dowie’s design was inspired by both tradition and the site. He was quoted in the Advertiser on 22 February 1967: ‘It’s an ancient tradition for fountains to honor the gods of the rivers that feed it. We have no river gods, but the water feeding this fountain will come from the Murray, the Onkaparinga and the Torrens and I decided to make it symbolic of this’. The rivers were represented by human figures and birds: ‘I made the two lesser rivers female figures (a woman and a black swan for the Torrens and a woman with a heron for the Onkaparinga). These are the cultivated areas, so I made the women European. But the old substantial Murray is male and had to be Aboriginal’. The Aboriginal man holds an ibis.

The three figures also echoed the triangular site made by the diagonal roadways. The whole construction was designed to be ‘a spectacle’, able to be viewed from all angles, and dominating the northern end of the square and the vista along King William Street north.

As well as adding to the controversy surrounding the redevelopment, the design adopted by the Council on 15 February 1967 was indeed a spectacle.

The three-sided fountain sits in an 18m-wide hexagonal pool with an outer wall of unpolished Angaston marble. Three Harcourt granite pedestals support the large cast aluminium basin and the aluminium figures. The basin reaches 4.6m above the ground. When the fountain is fully operational jets of water rise a further 4m from the basin, giving an overall height of 9m. Water cascades from the central bowl into three mid level pools and then via a fringe of streams into the main pool below. A further 33 jets of water shoot from the central pedestal and the main pool.

The fountain in use

The fountain was switched on by the Duke of Edinburgh on a subsequent visit on 28 May 1968. He commented ‘although there is not material advantage in having a fountain, it will give future citizens a great deal of pleasure, and no doubt a great deal to argue about’. He is reputed to have called the modernist fountain 'a monstrosity'; a view shared by a council gardener, James Purcell. James Irwin, however, noted the shift in public art that the fountain represented. It was something Adelaide could be proud of.

In March 2012 the Three Rivers was placed on the South Australian Heritage Register. The latest redevelopment of Victoria Square, which began in 2013, saw the fountain relocated to the southern side of the square. 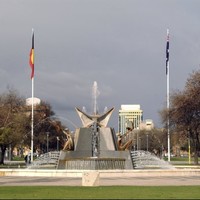 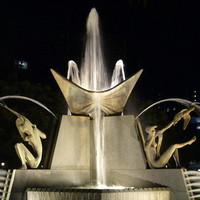 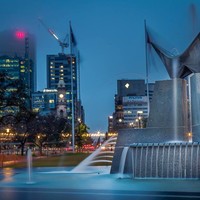 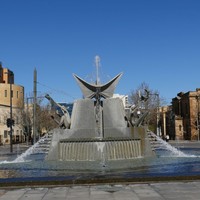 Lock-Weir, Tracey ed., John Dowie: A life in the round (Adelaide: Wakefield Press, 2001)