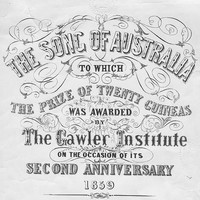 To celebrate its second anniversary in 1859 the Gawler Institute offered a prize of ten guineas for the best words and ten guineas for the best music for a national song. The competition attracted 96 entries for the words; the number of entries for the music is not known. The winners represented both sexes and the two main settler groups in South Australia – Carolyn Carleton, of English stock, won the prize for the words, and German-born Carl Linger won the music section. I don't think we do have any of Mary Ann, Catherine but will ask other family members.

That is a fantastic family history Jilly,
We'd love to know more. Do you have any photos of Mary Ann?

Noted on the Facebook site that my husband's Great Grandmother Mary Ann Limb nee Allen was the first person to sing this song at Gawler, 12 Dec 1859. Mary Ann was also the grandmother of entertainer Bobby Limb.

Loyau, George E, The Gawler handbook: A record of the rise and progress of that important town, to which are added memoirs of McKinlay the explorer and Dr. Nott (South Australia: Austaprint, 1978)