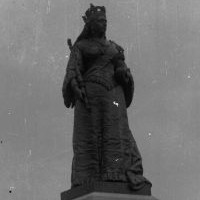 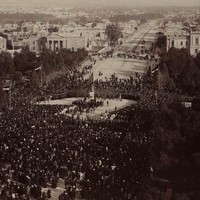 At the unveiling on 11 August 1894 military bands played and children from schools within the Adelaide City Council area sang the ‘Song of Australia’.

The Queen Victoria monument honours Alexandrina Victoria (1819–1901) who was the monarch of the United Kingdom of Great Britain and Ireland from 20 June 1837 until her death on 22 January 1901. From 1 May 1876 Queen Victoria used the additional title of Empress of India. Her dominion included the Australian colonies and after their federation she became the monarch of Australia.

The statue, its donor and sculptor

The statue was chosen by South Australian brewer, parliamentarian and philanthropist Sir Edwin Thomas Smith KCMG when he was in England in 1893 and offered to the Adelaide City Council on his return. Smith was highly regarded for his efforts to improve the facilities and environment of Adelaide during his mayoralty (1879–81 and 1886–87). He initiated programs to ‘modernise’ the city by creating parks and the Torrens Lake, replacing dilapidated wooden fences around squares with iron railings, asphalting dirt streets, installing gas lighting and deep drainage, and planting trees. Smith maintained a keen interest in the city throughout his life.

The statue reflected the design of one originally executed by English sculptor Charles Bell Birch (1832–93) for the Maharajah of ‘Oodeypore’ [Udaipur] in 1889. Trained at the Royal Academy and in Berlin, Birch specialised in portraiture busts and medallions. During the 1880s he was sought after as a sculptor of British gentry and politicians.

The 1889 model of Queen Victoria was later amended by Birch and recast for a statue installed in the entrance hall of the Imperial Institute in London, and it was this amended design that was chosen by Smith for the replica statue in Adelaide. It was cast in England at the Thames & Dutton foundry. Smith specified that the bronze be made of Australian tin and copper from Wallaroo Mine or Moonta Mine. Copper from Wallaroo was eventually used. The red granite base and pedestal for the statue were designed by Mr Smeaton and quarried from the land of Sir Samuel Davenport near Palmer, South Australia. Monumental stonemasons Fraser & Draysey of Waymouth Street, Adelaide carved the base and pedestal.

The day and time of the unveiling of the monument were selected with care. Sir Edwin Smith chose a Saturday when the general public could attend, and 4pm so that the event would not clash with the football or racing (of which he was also very fond). It was a grand occasion, with the defence forces, police and firemen arrayed in uniform. Military bands played and children from schools within the Adelaide City Council area sang the ‘Song of Australia’. Numerous prominent citizens, including Premier Charles Cameron Kingston and most of his ministry, Mayor Charles Willcox, Town Clerk Thomas Worsnop and Chief Justice Sir Samuel Way, were present. Lady Smith unveiled the statue. In his address, Governor Lord Kintore spoke of the strong connection and loyalty to Britain and her Empire current in South Australian society. The South Australian Register of 13 August 1894 commented that the statue ‘symbolises our loyalty to Her who is the living bond between this and the most distant parts of the empire. Here in the very centre, in the most prominent spot in the city, a monument had been erected … to witness that in Australia our loyalty is as strong as this granite upon which the statue rests’.

Even so, just a simple ‘Victoria R.I.’ is inscribed on the front of the pedestal.

Death of the queen

Following Queen Victoria’s death on 22 January 1901 the statue was draped in black as a sign of mourning. It was soberly decorated during the visit of the Duke and Duchess of Cornwall and York in July of that year. An octagonal canopy, mounted by a large crown, was erected over the statue. Greenery covered the canopy and purple flowers were placed around its base.

For several years after 1901 the Guild of the Garland, an Adelaide Society formed by girls’ secondary schools for the purpose of offering a tribute to the memory of Queen Victoria, placed a wreath of flowers on the statue. This annual event was subsumed into Empire Day, celebrated annually from 1905 on 24 May, the birthday of Queen Victoria.

The celebration of Empire Day gave way to Commonwealth Day in the 1950s. In 1966 the day was shifted to 11 June, the birthday of Queen Elizabeth II. Despite the shift from Empire to Commonwealth and changes in public attitudes towards Britain and the monarchy, Queen Victoria’s monument remained steadfastly in place in the centre of Adelaide until 2013 when another Victoria Square redevelopment succeeded where others have failed to dislodge her. In 2014 the statue was repositioned north of its previous central spot. 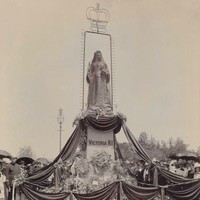 Queen Victoria statue with black drapes, following her death in 1901.

Courtesy City of Adelaide Archives. HPO851. Not to be reproduced without permission. 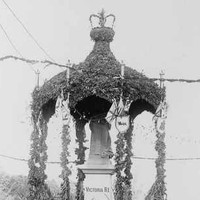 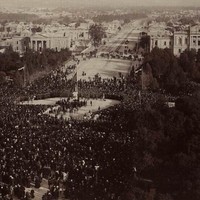 Image courtesy of the State Library of South Australia, SLSA: B 22215, Public Domain 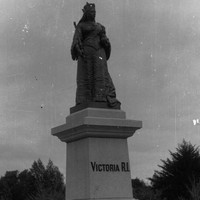 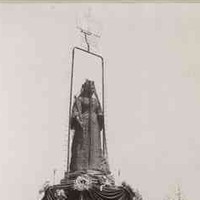 Image courtesy of the State Library of South Australia SLSA: B 3940, Public Domain 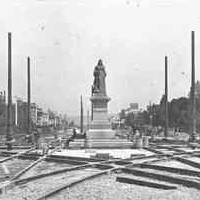 Image courtesy of the State Library of South Australia SLSA: B 64109, Public Domain.

South Australian Register, 16 February 1894, ‘The statue of Her Majesty the Queen’, p6