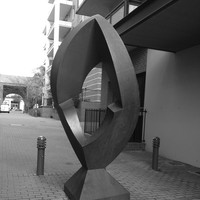 It was commissioned as part of Premier Don Dunstan’s concept of a 'Gallery without Walls'. Made out of steel the 10 foot 6 inch sculpture weighs approximately 390 kilograms. In 1988, Broughton's sculpture disappeared into City Council storage to make way for the construction of the Myer's Centre; Broughton's death in 1984 left the sculpture no clear advocates as it sat collecting dust. Broughton's sculptor peers and friends, Greg Johns and Max Lyle, fought for the work to be relocated to an outside spot for more than a decade. Lord Mayor Michael Harbison learned of the hidden sculpture in 2005 and worked with the Adelaide City Council to find a new site for the artwork. In late August or early September 2007, Greg Johns and Max Lyle joined Michael Harbison in unveiling the late Broughton's piece in Ebenezer Place, near Karen Genoff's work The Apron. 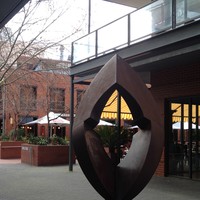 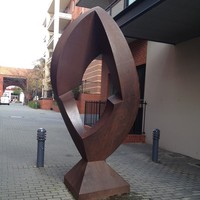 Associated with:
'The Apron' by Karen Genoff