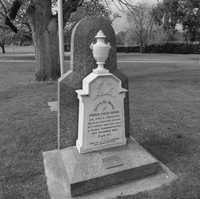 Commemoration Day at Glenelg. Phineas Philip Davies is killed by a premature explosion of the Protector’s guns.
1985

Davies' grave site is relocated to the Adelaide Parklands in conjunction with the establishment of the Naval Memorial.
1995

The Naval Memorial is unveiled

The Naval Memorial is an anchor mounted on a granite slab in the Parklands adjacent to Sir Edwin Smith Avenue. It is surrounded by thirty-two bronze plaques which commemorate ships and services in the Royal Australian Navy. Further behind the anchor monument is a flag pole marking the tombstone of Phineas Philip Davies. Surrounding the monuments are garden beds resembling the shape of an anchor.

The Death of Phineas Philip Davies

On 28 December 1885 Commemoration Day at Glenelg took place to honour the forty-ninth anniversary of the proclamation of the colony. Phineas Philip Davies was the first seaman to serve South Australia to be killed in the colonial navy. The royal salute, followed by the firing of the guns on the HMS Protector (South Australia’s sole naval ship), claimed the life of the young man. Davies failed to extinguish the flames in breech of number five gun causing the blank cartridge to explode when it was loaded. The premature explosion caused serious injury to Davis and fellow seaman Daniel Can. Davis never recovered consciousness and died from his injuries, whereas Can was sent to Semaphore hospital, suffering permanent disfigurement and the loss of sight in one eye.

'It was the Protector’s first opportunity to fire the royal salute at a Commemoration Day, and the celebrating crowds were left in uneasy speculation when she suddenly lowered her colours and steamed toward Port Adelaide' (Cameron, p.154).

Davies was unmarried and had come from New Zealand to join the navy for only a brief period of time. He had no family in South Australia and it was his ship mates who raised the funds for his tombstone. Davis was buried in Cheltenham, only being discovered sometime after that he was Jewish and needed burial preparations according to the religion's traditions. His grave remained undisturbed for one hundred years. It was after his grave plot expired that it was offered to the Naval Association. The Adelaide Council agreed on establishing the garden in the Parklands with the Naval Association Committee developing the anchor design and the Navy itself funding the project. ‘Courage’ roses were used to fill the garden beds.

A crowd of one thousand attended the unveiling on 8 April 1995. The garden and its monuments stand as a reminder of the sacrifices in the Australian Navy. 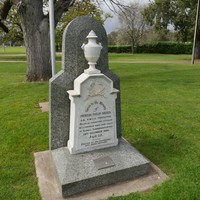 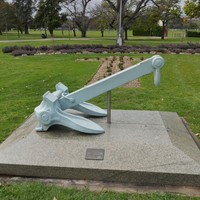 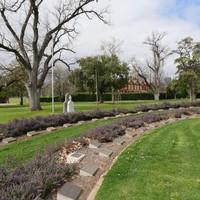 Hi Dennis,
Unfortunately Madeleine is no longer working with us. You can see the sources she used for this article if you click on the sources tab above the comments here. Hopefully that will give you some leads on where else to look!

Dear Madeleine, I'm a volunteer researcher with the Naval Historical Society Australia at Fleet base East at Garden Island Sydney. I've been tasked to write an Occasional paper on the history of the Navy in South Australia from Colonial Days through both the wars to modern times. Could you share with me any data you have on Seamen Phineas Philip Davies and Daniel Can, along with any other information on file you'd deem important in the historic sense in preparing such a paper. Regards, Dennis