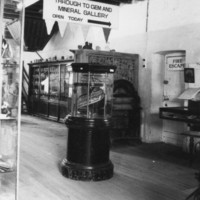 This scale model of the spiral staircase in the Newmarket Hotel is just 600 millimetres high, but represents months of careful craftwork. It was made by a young man named Walton Banks and exhibited at the Adelaide Jubilee International Exhibition in 1887.

‘A marvel of constructive ingenuity’

The Express and Telegraph described it at the time:

‘Mr W Banks has just placed near the principal entrance a beautiful model of a staircase, his handiwork. It is composed of 24 different kinds of woods, all polished, and is really a most creditable piece of workmanship, the various woods being admirably blended, and the whole piece of work one deserving of the highest praise.’ [Express and Telegraph 24 December 1887, page 3]

The Newmarket Hotel, designed by prominent architect Daniel Garlick and built by W. Baker, was completed in 1883 for Mrs Frances Badham. The imposing three-story building stands on the north-west corner of Adelaide on Town Acre One.

The model staircase went on to be exhibited in the South Australian Court at the 1888 Melbourne Centennial International Exhibition, where it was described by one journalist as ‘a marvel of constructive ingenuity’. [South Australian Weekly Chronicle 4 August 1888, page 11]

In early 1891 the South Australian Chamber of Manufacturers noted that Banks had forwarded the model for exhibition in their museum, and it was also shown at the Chamber’s Art and Industrial Exhibition, which ran from 14 March to 15 April 1895 in Adelaide’s Exhibition Building.

Banks’ model continued to be exhibited in Adelaide. In 1934 it was on display at the Technological Museum at the School of Mines, in the Brookman Building on North Terrace. It was donated to the SA Museum in 1963 and then transferred to Birdwood Mill Museum, which became part of the History Trust of South Australia in 1981 as the National Motor Museum.

Banks was in his early 20s when he constructed the model, and was still practicing woodwork as a hobby in his 70s. Walton Banks died in 1945 aged 85. 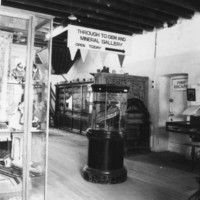 Chronicle, 13 December 1934, Objects That Tell a Story: Industrial Processes for All to See,  p.2