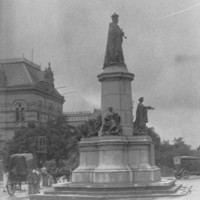 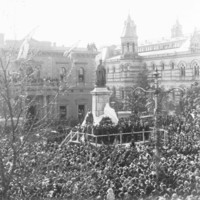 King Edward VII (1841–1910), eldest son of Queen Victoria and Prince Albert, was known both for his role as a peacemaker in foreign affairs and for his philandering. Prior to the death of Queen Victoria in1901 and his ascension to the throne, Prince Edward was a leading light in London society – spending his time eating, drinking, gambling, shooting, horse racing and sailing. After his marriage to Princess Alexandra of Denmark in 1863, Edward persisted with a luxurious lifestyle and had a series of long-term mistresses, including the actress Lily Langtree. He and Alexandra had six children, five of whom survived childhood. He did not acknowledge any other children.

King Edward VII became an active monarch following his coronation in August 1902. His connections to all of the major European royal families and fluency in French and German assisted foreign policy negotiations. His visit to France in 1903 paved the way for the Anglo-French Entente Cordiale of 1904. Attempts to address growing concerns over a naval build-up in Germany in a visit in 1908 proved less successful. King Edward VII was the first British monarch to visit Russia and Sweden. The king’s efforts in relation to foreign policy, together with his charm and condemnation of some forms of prejudice, made him a popular monarch.

King Edward VII’s heavy smoking began to affect his health: the King Edward cigar is named after him. On 6 May 1910 he died suddenly following several heart attacks. On hearing the news of his death, Adelaide Mayor Lewis Cohen immediately postponed the mayoral ball. After consulting the governor, Chief Justice Samuel Way and others, Cohen proposed the erection of a memorial to the dead king. An artistic memorial fitted with Cohen’s desire to improve the city.

Fundraising began immediately. The state government gave £500, Cohen donated £500 and the Adelaide City Council donated £250. With the approval of the minister of education and the director of education, a newspaper set up a ‘Penny Fund through which every child in the State may subscribe’ (Register, 24 May 1910). Names of all the children who made a donation were published in the Register. ‘Shilling funds’ were one way for adults to contribute. By the end of May 1910 £4500 had been raised from all sources, including hundreds of children.

A committee chaired by Cohen and including leading Adelaide businessmen was formed at a meeting in Adelaide Town Hall on 7 June 1910. Its aims were to raise funds and to commission the work. At the committee’s second meeting Sir Samuel Way recommended that Bertram Mackennal, a well-known Australian sculptor, be commissioned to model the work.

It was not long before donations amounted to more than £6000. But the children of South Australia had to wait 10 years to see the fruits of their contributions.

A long and difficult process

The long delay was partly due to the First World War, but it was also the result of a drawn out dispute between the committee and Mackennal over the design. Mackennal produced four models for the statue from which the committee chose a standing pose with two supplementary figures representing ‘Peace’ and ‘Justice’. The king was depicted as a field marshal, but the committee wanted a more regal appearance. Mackennal went ahead and cast the figure in accordance with the original model before the committee reminded him of their wishes. Sir Samuel Way insisted on a change of apparel, much to the objection of Mackennal who sought support from King George V. He finally relented and King Edward VII was recast in coronation regalia. Mackennal subsequently refused the committee’s request for a third figure to represent South Australia. Again Way insisted and a third figure was cast for a supplementary payment of £250.

The arguments between Mackennal and the committee halted work until 1913. By the time the approved statues were sent to a foundry for casting in May 1915 foundries were shifting to war production. Early in 1919, as the war ended, Mackennal was asked to complete the memorial as soon as possible. The South Australian public was tired of the delays. The project was completed for a total cost of £5750.

The committee, composed overwhelmingly of members of Adelaide’s establishment elite, had intended that the memorial be located in the Prince Henry Gardens opposite the exclusive Adelaide Club on North Terrace. The site was later changed to outside the Institute Building on the corner of Kintore Avenue and North Terrace.

The memorial statue, with its attendant figures, was unveiled by the Prince of Wales, later King Edward VIII, on 15 July 1920. The ceremony was hastily arranged to coincide with his visit. A very large crowd, stretching from King William Street to Frome Road, gathered to watch the unveiling, together with 500 invited guests. Buildings were adorned with flags and people watched from balconies and windows. The prince, in full military uniform, drove from the Exhibition Building. A guard of honour was provided by Prince Alfred College and the Tramways Band accompanied proceedings.

As the prince had requested there be no speeches, the ceremony was very short indeed. Lord Mayor Frank Boulden spoke briefly before the prince sprinted up the stairs, said ‘Thank you’ and pulled a coloured cord that slipped the white drapery from the statue of his grandfather. It was all over in 10 minutes.

The memorial is made up of a slightly larger than life-size bronze statue of King Edward VII dressed in coronation regalia. He stands on a marble pedestal 6.4m. Three female figures representing ‘Peace’, ‘Justice’ and ‘South Australia’ stand on a lower tier. ‘South Australia’ has her arms extended and fruits of the state at her feet.

The inscription on the pedestal reads simply ‘Edward VII King and Emperor 1901-1910’.

Sir Edgar Bertram Mackennal (1863–1931) was born in Melbourne. In 1882 he left Australia to study in London and Paris. He returned to Australia in 1887 and went back to England in 1891 to pursue his career as a sculptor.

Over his long working life Mackennal produced many public statues and memorials for sites in Australia, the United Kingdom and India. Among them were sculptures of monarchs, including effigies of King Edward VII and Queen Alexandra for the mausoleum at Frogmore. Mackennal designed the medals for the Olympic Games held in London in 1908. Interestingly, he designed the coronation medal, currency postage stamps and military honours relating to King Edward VII’s successor, King George V. A work of particular significance to Australians is the sun god ‘Phoebus driving the horses of the sun’ crowning Australia House in London (1923).

Mackennal’s creative work relating to the monarchy no doubt contributed to his being knighted in 1921. He was the first Australian sculptor to be elected to the Royal Academy, albeit as an associate member, in 1922. In the 1890s, as Mackennal was beginning his career, his symbolist-style sculpture was thought to be very advanced. However, by the late 1920s he was generally regarded in London art circles as a conservative academic sculptor. 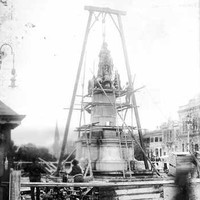 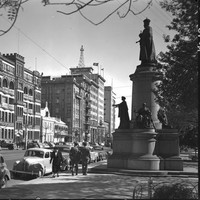 National Library of Australia, an23324011. Permission to publish required 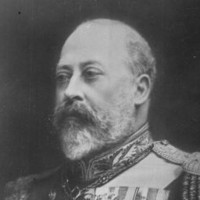 Portrait of King Edward VII, prior to 1910 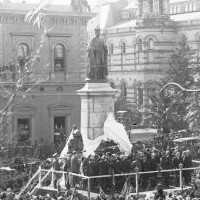 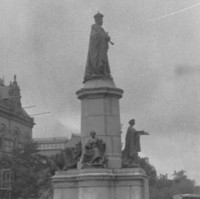 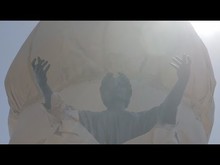 Associated with:
Fictional histories of Adelaide