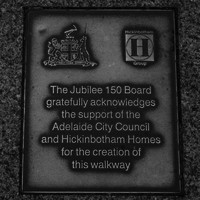 The year 1986 marked the 150th anniversary of the colonisation of South Australia. As part of that sesquicentenary, the Jubilee 150 Board honoured a selection of people who had made a significant contribution to the community or had gained national and international recognition for their work. A Jubilee 150 Walk of 150 bronze plaques was created along the northern footpath of North Terrace from King William Street to Pulteney Street.

Most of the J150 plaques give the name, year of birth and death, and the principal occupations of the people honoured. A few plaques contain the names of more than one person, so a total of 170 individuals have been commemorated. Many of the plaques were sponsored by individuals, families or organisations.

The plaques are arranged in alphabetical order along the footpath. There are some exceptions to this layout: Victoria Cross and George Cross recipients are grouped near the War Memorial, two sets of pioneer vignerons are placed after Bill Veale, Mary Lee is located between Thomas Stow and Arthur Strange, and Sir Robert Torrens and Alf Traeger are transposed.

The Historical Society of South Australia published S.A.’s greats: The men and women of the North Terrace plaques, edited by John Healey, in 2001. This book, since updated, contains biographies of each individual named on the J150 plaques. These biographies are republished, with permission, on the Adelaidia and SA History Hub websites.

Early in the twenty-first century the Adelaide City Council, in association with private individuals and organisations, installed some plaques on the same stretch of footpath: all but one of these bear the council’s crest and they may not be located in alphabetical sequence. 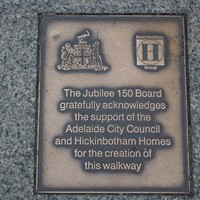 The introduction to the plaques along North Terrace
Courtesy of/Photographer:Pauline Cockrill, History SA 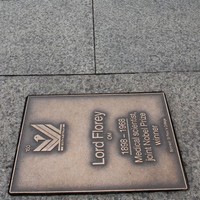 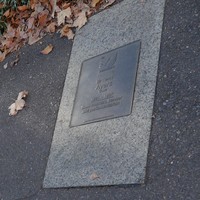