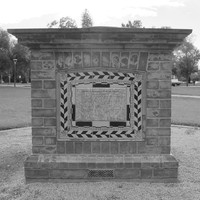 The memorial to John Jefferson Bray (16 September 1912–26 June 1995) in Hurtle Square, Adelaide honours the life and work of an eminent South Australian. Bray made a significant contribution to the community in the areas of law, literature and scholarship.

Bray lectured at the University of Adelaide in jurisprudence, legal history and Roman law and was appointed chancellor of the university in 1968. In addition to his legal and academic work Bray was an active member of the Libraries Board of South Australia between 1944 and 1989. As a man who loved literature and as a writer of poetry, Bray was closely involved with the organisation of the early Adelaide Festival of Arts Writers’ Weeks. His first volume of poetry was launched at the second Writers’ Week in 1962.

John Jefferson Bray was made a Companion of the Order of Australia in 1979.

The memorial to John Bray is located in Hurtle Square near where John Bray lived. It was commissioned by the Adelaide City Council in the year before his death.

The cube of muted red brick, with inlaid painted ceramic tiles on each of its four sides and a ceramic bowl for the fountain on its upper surface, sits gently amidst lawn and trees. The images created by the tiles allude to aspects of John Bray’s life. They feature: an urn and an eye (eastern face); a group of top knot pigeons (northern face); a crested bird in a garden with tools and watering can (southern face); and a poem by John Bray (western face). The light-hearted poem references his residence on the square. It reads:

Address to the pigeons in Hurtle Square

The pigeons in the square
Are pert and debonair
Plumped out with scattered scraps
They cease to fear mishaps
Accost me as I walk
With wheedling salesman’s talk
And when I don’t provide
They jostle me aside
Security we know
Is mortal’s chiefest foe
And Shakespeare’s warning words
Embrace both men and birds
They end who this defy
Cat’s lunch or pigeon pie
So fly off, bludging crew
And don’t shit on my shoe

The memorial was designed by artist Stephen Bowers in collaboration with architect Matthew Hardy. The builders were Norm and Peter Raggatt. Engraving on the upper surface of the memorial notes that it was a joint initiative of Peter Ward, Dimitri Theodoratos, the Inglewood Brick Co., the Literature Advisory Committee and the Art for Public Places Committee of the Department for the Arts and Cultural Development, Mintaro Slate Quarries, the Adelaide Review, the City of Adelaide, Smorgon Fencing, Wallbridge & Gilbert Consulting Engineers and Commercial Ceramics & Stone.

Regrettably, the fountain no longer operates as it was eroding the artwork on the tiles.

Stephen Bowers was born in Katoomba in the Blue Mountains of New South Wales in 1952. For most of his professional life he has been associated with Adelaide. He began working as an art teacher in regional South Australia in the late 1970s, before being awarded a traineeship in ceramics at the Jam Factory in 1982. Bowers went on to become managing director of the Jam Factory, Adelaide’s centre of advanced craft training.

As a studio potter, Bowers focuses on the conceptual design and decoration of pots rather than throwing. He is renowned for the application of his considerable drawing and painting skills in his work. The art of Stephen Bowers is characterised by references to Australian flora and fauna, particularly birdlife, which also feature in Bray’s memorial. But his images are not simple reproductions; they contain layers of meaning and cultural references. His work is described as both witty and subversive. Sasha Grishin notes Stephen Bowers’ interest in national identity, personal histories, the history of sexuality and ‘white Australia’s black history’ (Sydney Morning Herald, 7 December 2013). 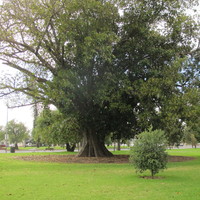 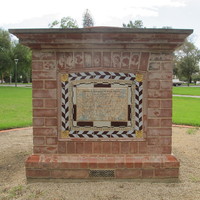 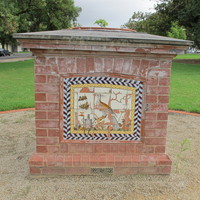 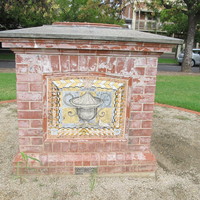 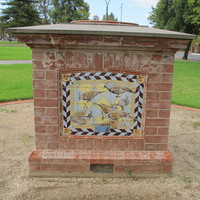