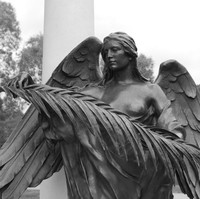 Plans for the Angas Memorial

Sturt Statue is Granted the Site

A New Site on North Terrace

Construction of the memorial begins
1915

The Memorial is Completed

The memorial is completed without an unveiling ceremony 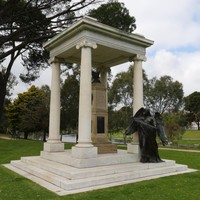 The Angas Memorial is Relocated

The Angas Memorial was completed in 1915 as a tribute to the memory of George Fife Angas and John Howard Angas, colonists who contributed to the foundation of South Australia. The monument is made of marble comprising of a shelter supported by four columns which cover a pillar adorned with bronze plates acknowledging the achievements and contributions of the Angas family. The memorial also includes an Elizabethan ship atop the pillar and a life size bronze angel ascending the stairs leading to the inscriptions.

In recognition of the pastoral and political successes of both George Fife Angas and his son, John Howard Angas, the City of Adelaide settled upon erecting a memorial to ensure remembrance of their kindness to the community. The memorial itself was a gift from the Angas family and land was put aside in Victoria Square for its construction after the death of John Howard Angas in 1904. Despite this, the site was then formally granted to the Sturt statue construction in 1907 and the delay pushed forward the date of construction to 1909 when the Adelaide City Council allowed the Angas family to proceed. However, arguments developed about the merits of the Angas family which led them to withdraw from their claim to the site in Victoria Square. Subsequently, a site on North Terrace was selected under the persistence of John Howard Angas’s daughter, Lilian Gertrude Angas, who still sought a memorial which would recognise the importance of her predecessors. The supervision of the memorial was entrusted to her brother Charles who looked after family affairs. Architect George Soward oversaw the project while William Robert Colton designed the canopy and the bronze plates. The memorial’s foundation was finally laid in April 1913 accompanied by the canopy, which was carved in Italy the following year, and then the remaining pieces of sculpture.

The Angas Memorial was completed in 1915 without an unveiling ceremony, possibly due to the frustration at the memorial’s long delay. It was located in the Prince Henry Gardens before removal to its curernt position on the Torrens in 1929 when North Terrace was being redeveloped. 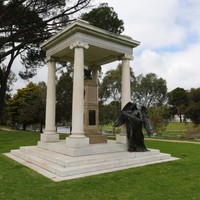 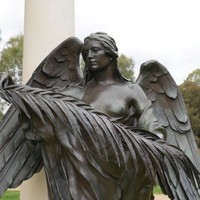