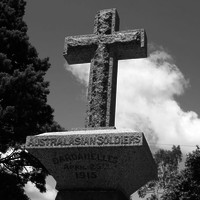 On 23 August 1915 the Adelaide City Council accepted a proposal by the Wattle Day League to establish a grove of wattle trees to commemorate the landing of Australian troops at Gallipoli on 25 April 1915.
1915

The Adelaide City Council relocated the obelisk to Lundie Gardens, the site of a First World War training camp in the northwest corner of Park 21 West, in October 1940. 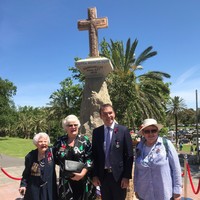 Guests at the Re-dedication
2018

The memorial was moved again, this time to become part of the ANZAC Centenary Memorial Walk, with a re-dedication ceremony on 11 November.

The Dardanelles Memorial is the first memorial in Australia erected to soldiers of the First World War. It commemorates the landing of Anzac forces on Gallipoli Peninsula on 25 April 1915 and the many casualties they suffered.

Instigation of the memorial

On 23 August 1915 the Adelaide City Council accepted a proposal by the Wattle Day League to establish a grove of wattle trees to commemorate the landing of Australian troops at Gallipoli on 25 April 1915.

The ‘war memorial plantation’ was designed by Adelaide builder and prominent League member, Walter Torode. His design included a 3.65m high granite obelisk, to be positioned in the middle of the plantation. The memorial was surrounded by a ‘rustic pavilion’ or wooden pergola with wide openings on four sides. Four trees, symbolising the Allies, were to be planted outside the pergola. The perimeter featured more than 100 golden wattle trees and beds of native trees and shrubs. The site was fenced, with entrances on each of the four sides.

The Wattle Day League, which originated in South Australia, was a nationalistic body in favour of compulsory military training. Torode is credited as the initiator of tree planting in memory of Australian soldiers.

The memorial, to be situated in the south parklands, was supported by City Gardener August Wilhelm Pelzer because it coincided with his program of ‘beautification’ of the southern parks around the city. The memorial site, bordering Sir Lewis Cohen Avenue, became known as ‘Wattle Grove’.

The memorial was erected at no cost to the public purse. Materials and labour were volunteered.

The obelisk was erected largely by employees of Walter Torode working as volunteers in the two weeks prior to the unveiling. Newspaper reports noted that a carter had risen at 3am to bring stones to the site and several workers living at Mount Lofty had taken the afternoon off work to assist. On Saturday 4 September a special afternoon tea was provided for them by the Wattle Day League. President of the federal and South Australian branches of the League, William Sowden, thanked the volunteers and praised them for their ‘self-denying patriotism’.

The site foreman was J Meinchke of Kapunda. The wattle trees were supplied by Adelaide’s Botanic Gardens. The memorial obelisk was cut by stonemasons from Adelaide firm of JT Brown from Murray Bridge red and Monarto grey granite.

The rough stone base represented ‘the rugged hills up which the Australian soldiers had to climb’. The smooth stone at the apex symbolised victory. Initially the obelisk had a flat stone surface on which a vase of flowers could be placed. It was later topped by a stone cross. The inscription carved into the granite block beneath the cross simply acknowledged the Australasian soldiers at the landing.

The memorial was erected and unveiled when troops were still hopelessly pinned down and suffering heavy casualties on the Gallipoli Peninsula. Nevertheless, the Register’s report of the occasion emphasised ‘not grief, but pride – nation pride’ and the call to service.

The Advertiser of 8 September reported Sowden’s comments that two flowers typifying Australian flora had been selected for the site: the golden wattle (‘emblem of hope and glory’) and the black ‘Kennedya’ (Kennedia Nigricans; ‘symbol of bereavement and sorrow’).

The first four trees were planted by Sir Ronald and Lady Munro-Ferguson and Sir Henry and Lady Galway. Other ‘leading citizens’ and representatives of wounded soldiers planted trees, as did Helen Mantegani (née Thomas) who had been present at the proclamation ceremony in December 1836 when 11 years old.

The unveiling was followed by a patriotic concert that night at Norwood Town Hall.

Plantings and memorial services continued there until the end of the 1920s. Another 44 trees and rose bushes were added in 1916. Guard rails were erected to keep cattle out of the gardens. In 1919 a wattle tree was dropped from an aeroplane by South Australian aviator and war veteran Henry (Harry) Butler to commemorate the role of Australian aviators during the First World War. The tree was planted by Chief Justice Sir George Murray and the spot was marked by a small plaque. Unfortunately, the tree no longer exists, and the bronze tablet reading ‘Wattle Day 1919’ is now in the care of the Adelaide City Council. The memorial was eventually surrounded by 140 wattle trees.

By the 1930s the site had deteriorated, the pergola was overgrown with creepers and the obelisk was obscured. The Adelaide City Council relocated the obelisk to Lundie Gardens, the site of a First World War training camp in the northwest corner of Park 21 West, in October 1940. Mirnu Wirra, Kaurna for ‘golden wattle grove’, is now the dual name for the park where very few wattle trees remain.

Extensive renovations in 1969 included replacing the original stone cross and attaching a copper plaque to the base of the granite cairn. The new inscription acknowledged the memorial’s unveiling by the governor-general on Wattle Day 1915.

Services have resumed at the memorial in recent years. Held on the anniversary date of its unveiling, 7 September, they commemorate the Dardanelles campaign and recognise the significance of the memorial as the first of its kind.

In 2018 the memorial became part of the newly installed ANZAC Centenary Memorial Walk on Kintore Avenue, linking the National Memorial on North Terrace, with the Pathway of Honour and Torrens Parade Ground.

It was re-dedicated by Chaplain Carl Aiken and Rob Manton, Director of Veterans SA, on Sunday 11 November 2018 following the Remembrance Day service. This marked the centenary of the First World War Armistice. The memorial is now located at the northern end of the ANZAC Centenary Memorial Walk on Kintore Avenue, Adelaide (adjacent to the Pathway of Honour). It was relocated to its current position from Lundie Gardens, South Terrace. 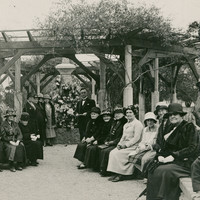 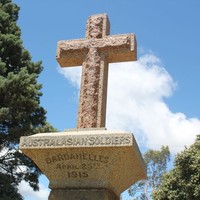 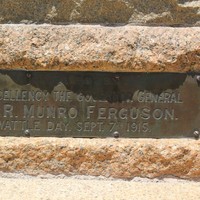 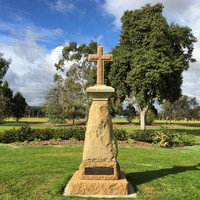 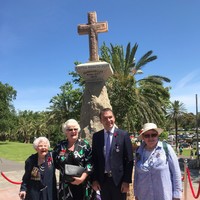