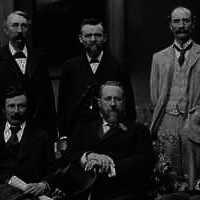 Charles Cameron Kingston (1850-1908) was the younger son of Sir George Strickland Kingston, first Speaker of South Australia's House of Assembly. Charles Kingston was appointed to the Bar in 1873 and made a Queen’s Council in 1888 in recognition of his legal knowledge, skills and achievements.

In 1881 CC Kingston was elected to the House of Assembly as Member for West Adelaide, a predominantly working class electorate. As ‘the declared foe of all class privilege’ (Advertiser, 26 May 1916) and an unorthodox character, Kingston was popular with the general public, but shunned by ‘polite society’. He had a passion for Australian Rules Football and was president of the South Adelaide Football Club from 1880 until his death.

Kingston’s radical-liberal politics were evident in his achievements as the colony’s attorney-general (1884-85, 1887-89 and 1893-99) and premier (1893-99). Under Kingston, in 1894 South Australian women became the first in the world to win both the right to vote and to stand for parliament. In the same year Kingston’s government also secured legislation to regulate the working conditions of South Australian employees and to enable the making and enforcement of industrial agreements between registered trade unions and employers.

Charles Kingston was an early supporter of the federation of the Australian colonies. In 1897 he was elected president of the Federal Convention in Adelaide, a position he retained in subsequent sessions in Sydney and Melbourne. Kingston contributed to the drafting of the Australian Constitution and helped to steer it through the British Parliament. He was elected to the first Australian Parliament and became the first Minister for Trade and Customs. Kingston vigorously pursued protectionist policies for the new nation and was largely responsible for setting up the tariff system. He also strongly supported the Immigration Restriction Act 1901 which became notorious as the ‘White Australia Policy'.

Scandal tended to follow Charles Kingston. Early in his career he was co-respondent in a society divorce. In 1892, prior to becoming premier, he was arrested in Victoria Square for duelling. Kingston was publicly assaulted in the street twice, but fought back each time, giving as good, or better, than he got. Kingston was a courageous reformer, but he could also be abusive and vindictive. Syphilis cut short his career in 1903 and led to rapid physical and mental decline; he died in 1908.

The move to erect a statue in honour of Charles Cameron Kingston was initiated by Chief Justice Sir Samuel Way and a small group of Kingston’s friends, including newspaper owner Sir John Langdon Bonython and solicitor and parliamentarian William Denny. Donations large and small were forthcoming. Readers of the Bulletin contributed, but the largest donation of £500 was made by Michael McNalley, who had not met Kingston, but greatly admired him.

British sculptor Alfred Drury was chosen to design the statue. Drury was particularly admired by Samuel Way as the sculptor of the memorial to Sir Thomas Elder completed in 1903. South Australia's Agent-General, Sir John Cockburn, and businessman, pastoralist and South Australian parliamentarian William Austin Horn supervised the work in London. Horn had already demonstrated support for the arts with the donation of three sculptures to the City of Adelaide. His wife provided photographs.

In 1910 Bonython requested a suitable site for the statue from Adelaide City Council. Victoria Square was chosen as an appropriate location given Kingston’s important role in state and federal politics. The central location had featured in some of the most colourful episodes of his life. The statue was to be positioned in the northwest facing down Grote Street towards his electorate of West Adelaide.

The statue, shipped to South Australia free of charge by the Orient Steam Navigation Co., arrived at Port Adelaide in November 1915.

By this time Way was dead and Denny was fighting in France in the First World War. The unveiling was therefore co-ordinated by Bonython who chaired the statue committee. It was set to coincide with a Premier’s Conference to enable interstate politicians to attend. Sir Edmund Barton, who had worked with Kingston to establish the Australian nation, made a special trip to be there.

In outlining the history of the statue, Bonython emphasised Kingston’s role as a statesman and patriot. He acknowledged Kingston’s love of power, but never for his own sake. Pearce stressed that while Kingston had been a Liberal and ‘not a Labour man’, he had earned the respect of labour. Barton, Australia’s first prime minister, noted Kingston’s popularity, his support for ‘the poor and oppressed’ and his contributions to forming the nation and to state and federal politics.

To the accompaniment of the Mitcham Camp Reinforcement Band and public applause, the governor-general unveiled the statue and Kingston's wife placed a wreath of violets at its base.

The statue of Charles Cameron Kingston captures ‘little of his fire’ (Cameron, p66). The uncharacteristically staid image of Kingston has him dressed inappropriately in the garb of a privy councillor, complete with sword when Kingston hated privilege and had refused a knighthood. He also preferred fists and a duelling pistol to a ceremonial sword.

The bronze statue rests on a carved marble pedestal and marble and red granite base by W Laycock of Adelaide. The pedestal is decorated with bronze relief panels. On the front a plaque refers to Kingston as a 'Patriot and Statesman' and a bronze coat of arms rests on the cornice of the plinth, with quartered lions and the motto ‘Viribus Scandens’ (In Strength Ascend). The southwest panel depicts Kingston presiding over the 1897 convention of 1897. The southwest panel depicts Kingston addressing federal parliament with fellow federalists Sir Edmund Barton, Sir John Forrest, Sir George Turner and Alfred Deakin. The northeast panel is of Kingston’s father, Sir George Strickland Kingston. 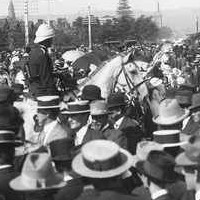 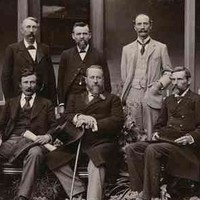 Image courtesy of the State Library of South Australia SLSA: B10810, Public Domain 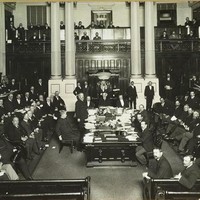 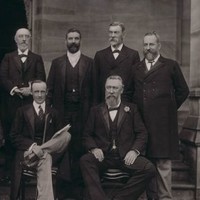 The first Commonwealth Ministry, 1901. Kingston is on the right in the back row.
Courtesy of/Photographer:Crown Studios 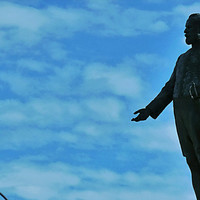 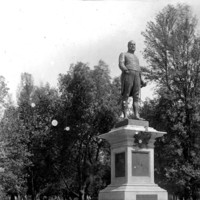