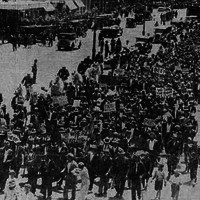 An elected Parliament now creates laws in colony of South Australia, rather than the Governor in Council
1891

Six Australian colonies now able to govern in their own right, independent of Britain
1905 - 1909

South Australia’s reputation as a progressive colony and state stemmed from the nature of its founding as a free settlement and its concomitant rejection of an established church. Edward Gibbon Wakefield’s concept drew heavily on English radical liberal thought and encompassed a vision of human progress free from the shackles of anachronistic religious and political structures. It was the first colony to entirely separate church and state, and its early embrace of religious pluralism included making a home, from 1838, for a large number of German Lutherans who were suffering persecution at the hands of the Prussian state.

The Dissenting faiths benefited from the premises of the foundation, and early politics and social life more than occasionally involved sniping between Methodists and Anglicans, though they were predictably united in their suspicion toward the minority Catholics who settled in larger numbers from 1848.

The early liberal promise was not immediately apparent in the colony’s politics, and the rapid succession of administrations after self-government in 1856 was only eased by the premiership of Charles Cameron Kingston (1893–99). Kingston played a critical role in the enactment of legislation extending the franchise for both men and women, establishing a state bank, promoting rural village settlements for the urban unemployed, and relating to the supply of land, labour conditions, arbitration and education.

The South Australian contingent at the constitutional conventions leading to Federation was regarded as the most impressive of the colonial delegations. Kingston, John Cockburn, Josiah Symon, Richard Baker, John Downer, and Patrick McMahon Glynn were great enthusiasts for the new nation, as was the South Australian electorate which recorded massive majorities at the referendums. Kingston’s talent was acknowledged in his ascent to the ministry in Edmund Barton’s new Commonwealth government.

During this period South Australian women gained early recognition for the strength of their commitment to suffrage and social and educational reform. Both Catherine Helen Spence and Mary Lee had a national profile on these matters.

In the twentieth century the state’s free-thinking reputation was considerably tarnished by the treatment of the now second- and third-generation Germans during World War I. A combination of school closures, internment, and geographical sleight-of-hand (Hahndorf became Ambleside, for example) highlighted the fragility of a relatively tolerant society in times of stress.

Chartism and the Early Labour Movement

On the political front the early Chartism of the South Australian Political Association (1850) eventually found a labour lineage and three United Labor Party candidates were elected to the Legislative Council in 1891. The early labour movement adopted the liberal political platforms with an emphasis on the plight of working people. The first Labor premier was Thomas Price (1905–09), who indeed came from humble beginnings, but the accession of the Prince Alfred College-educated Crawford Vaughan (premier 1915–17) and his brother Howard (attorney-general in the same government) gave some indication that South Australian Labor would not confine itself to working-class leadership. Vaughan, whose grandfathers had both been Chartists, left the Labor party over the conscription issue. It is possible that the Labor split over conscription was more traumatic in South Australia than elsewhere, as the party lost most of its considerable Methodist and lower middle-class representation, which in turn narrowed the ranks of available talent.

Labor tended to lack ideas, and its weakness over time also owed much to the strength of pragmatic radicalism among sections of the Liberal and Country League. This contributed to a distinctive alliance of business, party and the public service, which in turn gave rise to a new state economy, the birth of which placed a near-permanent strain on the association between establishment Adelaide and its political party.

The most stressful moment in this relationship was the Playford government’s successful attack on the privately owned Adelaide Electric Supply Company – an organisation that had its parent in the United Kingdom. Playford’s creation of the Electricity Trust of South Australia (ETSA) in 1946 was a pre-requisite for the continued industrialisation of the state, yet its political importance cannot be overstated. It accords with the high Keynesianism that was enunciated by opinion and policy makers in the 1940s.

The work of Playford and his supporters transformed the fabric of South Australia. Subsequent rapid population growth was made possible by record levels of immigration, which in turn brought new ideas and new cultures, diluting the influence of the near dominant Anglo-Saxon Protestantism evident in the state. Post-war demographic changes and the increasing secularising of society saw a different kind of state politics emerge.

The most visible symbol of this change was Don Dunstan (premier 1967–68, 1970–79). In Dunstan, South Australia might again claim a political radicalism that it could place beside the industrial and economic radicalism of his Liberal predecessors. Dunstan and his governments enacted a multitude of statutes on issues of rights (suffrage, Aborigines), while they also broadened the role of government into areas now regarded as the norm (consumer protection, for example).

Dunstan’s governments can be seen, at one level, as the kind of modernising force that worked through most governments in Australia in the later half of the century. At another level, they were self-consciously attempting to break with what they saw as the straitening conventions of a society generally acknowledged to be more puritanical than most, given the dominance of Non-conformist Protestant mores. Apart from overt promotion and support for the arts, these governments were determined to pursue more controversial legislative change with regard to abortion and homosexuality.

At the extreme ends of the political spectrum in South Australia there has been some vigour, the most serious incidences of social unrest being linked to economic depression (the beef riots in 1931) and national polarisation (the anti-war protests over Vietnam). Among those prominent in the latter were a host of intellectuals, including a future Labor premier, Lynn Arnold.

Most recently the radical voice in South Australia has been found in the sphere of opposition to mining and development, and the railings of some on the right against national immigration policies. In an age when to be a Keynesian is to be of the left, the voices of those who have been unwavering in their critique of the sale of once publicly owned instrumentalities (like ETSA) and in their support for more pronounced state intervention are as radical as any heard in the public domain. 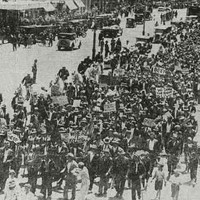 Image courtesy of the State Library of South Australia, SLSA: B60882, no known copyright.