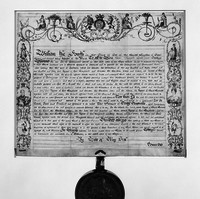 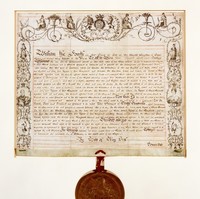 Letters Patent establishing the Province were signed on 19 February, 1836

The result of a long campaign by those who wished to establish a colony according to the principles of systematic colonisation, the South Australia Act of 1834 empowered the King to erect South Australia into one or more British Provinces, and to provide for its colonisation and government.  The preamble to the Act included a description of the lands on which such Provinces were to be erected as ‘waste and unoccupied Lands, which are supposed to be fit for the Purposes of Colonization’.

A period of intense negotiation followed between those planning to establish the province of South Australia and the Colonial Office, which administered Britain’s colonies.  One of the topics under discussion was provision for the Aboriginal inhabitants, particularly in relation to their proprietary rights to land, rights which those in the Colonial Office believed were beyond dispute. The Colonization Commissioners, seeking to establish the province, disputed that such rights would be found to exist, believing that Aboriginal people did not ‘occupy’ the land in a way that would be recognised by British institutions.

Negotiations between the Commissioners and the Colonial Office continued. Finally, when the Letters Patent establishing the Province were signed on 19 February, 1836, they included the clause:

Provided always, that nothing in these our letters patent contained shall affect or be construed to affect the rights of any Aboriginal Natives of the said Province to the actual occupation or enjoyment in their own Persons or in the Persons of their Descendants of any Lands therein now actually occupied or enjoyed by such Natives.

In 1838 the South Australia Act was amended, and wording conforming to (and referring to) the Letters Patent was inserted.

Colonisation of the new province of South Australia proceeded with little regard for the words of the Letters Patent relating to Aboriginal rights to land. No treaties were entered into. Land was sold, leased and granted to colonists, and its Aboriginal inhabitants were progressively dispossesed.

In the early twenty-first century, the question of the potential legal implications of the disregard of the Letters Patent in the colonisation of South Australia became a focus of research. Some Aboriginal groups argue that the document recognised or conferred rights on Aboriginal inhabitants which survive, despite the actions of the colonists. The Letters Patent is again the source of discussion and controversy as its significance and legal meaning are debated. 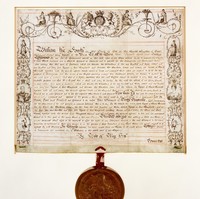 The Letters Patent for establishing the province of South Australia

Foster, Robert, 'An imaginary dominion : the representation and treatment of Aborigines in South Australia, 1834-1911'  (PhD thesis, University of Adelaide, 1993)