Over 400 South Australians served in the Korean War (1950–53) alongside other Commonwealth and United States forces. Most were in the Army as members of the 1st and 3rd Battalions of the Royal Australian Regiment. The North Terrace War Memorial lists 12 fatal casualties from those enlisting in the state, while RJ O’Neill’s history of the war gives coverage to over 25 South Australians who attained some prominence. These included a future premier, Des Corcoran, who was mentioned in despatches, and Squadron Leader Graham Strout, the first Australian to lose his life in the conflict. The paintings of Ivor Hele, an official war artist in both this conflict and World War II, serve as a tribute to soldiering in extremely difficult conditions. 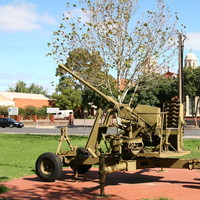 Evans, Ben, Out in the Cold: Australia's involvement in the Korean War 1950-53 (Canberra: Australian War Memorial and Dept. of Veterans' Affairs, 2000)