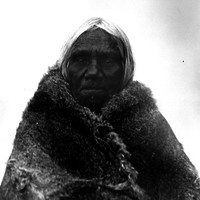 The Kaurna are the original people of Adelaide and the Adelaide Plains. The area now occupied by the city and parklands – called by the Kaurna Tarntanya (red kangaroo place) – was the heart of Kaurna country. Before 1836 it was an open grassy plain with patches of trees and shrubs, the result of hundreds of generations of skillful land management. Kaurna country encompassed the plains which stretched north and south from Tarntanya and the wooded foothills of the range which borders them to the east.

Karrawirra Pari (red gum forest river) is the Kaurna name for the watercourse called the River Torrens by the colonists. It was an important resource area and a favourite camping place for the Kaurna people, providing water, fish and other foods.

The Kaurna, probably numbering around 300 people, were usually called by the colonists the Cowandilla or Adelaide tribe. The term Kaurna probably derives from the term for man or people in the language of their southern neighbours, the Ramindjeri and Ngarrindjeri. Other neighbouring groups are the Narungga of Yorke Peninsula, the Nukunu to the north, the Ngadjuri to the north east and the Peramangk of the hills to the east.

The Kaurna spoke a complex language which reflected their sophisticated culture and deep knowledge of the environment. Kaurna society was ordered by a moieties system, a division of the social world into two groups with reciprocal relationships and responsibilities. Learning about culture and environment began in childhood and continued into adulthood – and this gaining of knowledge was recognised as the basis of an individual’s authority.

Teaching young people was a central part of Kaurna life, and understanding the environment was important for more than just food, shelter, tools and medicine. Kaurna spirituality recognizes the connectedness of people and culture with the worlds of plants, the animals and stars. The land is alive with traces of Dreaming ancestors such as Tjilbruke.

The world of the Kaurna was irrevocably altered with the arrival, first, of European explorers, then whalers and sealers along the coast from the early 1800s, and then, finally, the South Australian colonists of 1836.

While the Letters Patent which defined the British province of South Australia included a clause recognizing the rights of the ‘Aboriginal natives’, those rights to land were not honoured in practice. It was the Kaurna who first experienced the shock of colonisation.

In 1839 the Native Location was established to ‘Christianise and civilise’ the Kaurna. It was soon moved from the south to the northern bank of the river, to a place called Pirltawardli, (brush-tail possum home). Local people were encouraged to camp or stay in the newly built dwellings. They were soon joined by two young German missionaries, Christian Gottlob Teichelmann and Clamor Wilhelm Schürmann, who established a ‘native school’ and recorded elements of Kaurna language and culture.

Teichelmann and Schürmann recognised a system of Kaurna land ownership. They wrote in 1840 that the term pangkarra referred to ‘a district or tract of country belonging to an individual, which he inherits from his father’. They also noted Mullawirraburka as an example of an individual taking as his name the name of his country (Mullawirra) followed by - burka, or elder, which together denotes ownership. Mullawirraburka, a prominent Kaurna man, was called ‘King John’ by the colonists.

When Kaurna woman Kudnartu married Thomas Adams in 1848 she became the first Aboriginal woman to marry a colonist. The colonial government granted the couple land at Skillogalee Creek, near Clare. They had two sons, Thomas and Timothy, and later in life Thomas repeatedly applied, unsuccessfully, to regain this land.

Fringe dwellers in their own country

The colonists soon spread across the Adelaide Plains, establishing farms and settlements along the creeks and fertile flats, fencing, building houses and claiming the country. By 1850 the area from the Gawler River to Willunga had been declared in Hundreds and the bulk of the land disposed of by sale. The Kaurna were rapidly reduced to fringe dwellers in their own country. Some worked with or for the colonists; others attempted to continue their traditional way of life. Official reports noted their declining numbers. The Kaurna were being decimated by the process of colonisation as new diseases, alcohol, and, underpinning everything else, loss of land and livelihood, took a heavy toll.

By the 1850s, few of the remaining Kaurna were in Adelaide. In 1850 the children at the Native School (which had been on Kintore Avenue since 1846) were transferred to the Poonindie Native Training Institution near Port Lincoln. Kudnartu’s sons were taken there after her death in 1855. Ityamaiitpinna and his wife and child were living in Clarendon by the early 1850s. Twelve people described as ‘the small remnant of the Adelaide tribe’ were moved from a camp in Port Adelaide to a newly established ration depot at Willunga in 1858. Other Kaurna people were to move to Point McLeay and Point Pearce. Some remained in, or visited, the fringe camps around Adelaide.

The main camp in Adelaide after 1845 was at the Police Paddocks – on the riverbank in the Parklands north of the Botanic Gardens. 1874 saw the arrest of all Aboriginal people in the city for vagrancy and the laying out of Botanic Park on what had been their campsite. The late 1870s saw the return of camps, and about 50 people moved between the main camps in the Parklands, Glenelg and Port Adelaide. During the 1880s and 1890s the  main city camp was at Pinky Flat on the northern bank of the River Torrens, east of Morphett Street. Other persistent camps were at Glenelg and Port Adelaide, both of which included Kaurna people. Among visitors to the Glenelg camp was James Phillips, a son of Ityamaiitpinna and an ex-student of the Native School, who was interviewed there in 1896.

The passage of the Aborigines Act of 1911 gave the Protector of Aborigines sweeping powers over the lives of Aboriginal people. In January 1912 Chief Protector William South used the Act to have the people camping around Adelaide removed – and threatened with imprisonment if they returned.

The idea held by many non-Aboriginal people that the ‘Adelaide tribe’ was extinct suffered a challenge in the decade from 1919 and 1929. In 1919 ethnographer and writer Daisy Bates interviewed Ivarityi (or Amelia Taylor) daughter of Ityamaiitpinna. A steady stream of researchers and journalists visited Ivarityi over the following ten years, and among resulting publications was the term Tarntanya (red kangaroo place), the original name for Adelaide.

The Aboriginal population of Adelaide began to grow during the Second World War. But it was only after the repeal in 1962 of the restrictive legislative provisions which had controlled the lives of South Australia’s Aboriginal people for the previous five decades that Aboriginal people could choose where to live. What had been a small number of people migrating to Adelaide grew rapidly, as people moved to take up opportunities in employment, education – and to live near their families.

Aboriginal organisations flourished in Adelaide from the 1970s and 1980s, and 'Nunga' emerged as a general term used by South Australian Aboriginal people to describe themselves. More specific groups based on place and language continued. The last two decades of the twentieth century saw the re-emergence of a group of Aboriginal people who speak for the Adelaide Plains and identify as Kaurna.

Lewis O’Brien went into the government archives when he was a young man, and was able to confirm family stories about his great-great grandmother Kudnartu and details passed down orally through almost a century. He explained in 1990:

I thought for a long time that I was a Narrunga person but I found out, through tracing history, that there were some survivors of the Kaurna – including myself – and now there’s probably a thousand of us Kaurna descendants who can trace their ancestry back to a number of Aboriginal women who had children. It pleased me to think that we were survivors and that we are still here and still doing things’[1]

In 1972 a monument was erected at Tjilbruke springs, Kingston Park. The sculpture by John Dowie commemorates an important site on the track of Tjilbruke, a dreaming ancestor of the Kaurna. A decade later, a new committee responsible for the monument was created, this time actively involving Kaurna people.

A significant part of the Kaurna cultural renaissance has been the revival of the Kaurna language, reconstructed from mid nineteenth century wordlists and the grammar compiled by Teichelmann and Schürmann at the Native Location.

Kaurna culture and history are increasingly acknowledged and visible in Adelaide through public art and placenames. There are several major public artworks at prominent sites within the city which incorporate Kaurna language and themes, including at the entrance to the State Library of South Australia and to the Adelaide Festival Centre. The site of the Native Location at Pirltawardli is also commemorated with artworks and interpretation. The Adelaide City Council Kaurna placenaming initiative has been a groundbreaking project which has seen the adoption of Kaurna names for all city parks, and dual naming of the five city squares and the river. Kaurna language  is frequently heard at public and ceremonial occasions as Kaurna elders perform a Welcome to Country. 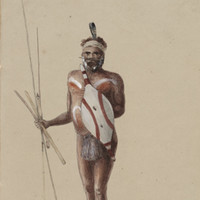 This painting by GF Angas is of Kadlitpinna, also known as 'Captain Jack'.

Courtesy South Australian Museum Archives, AA 8/2/8/1. Not to be reproduced without permission. 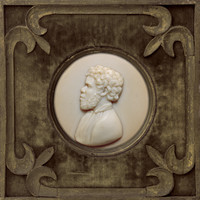 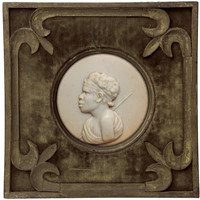 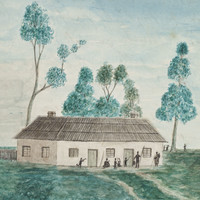 'The schoolroom of the Aborigines' by William Anderson Cawthorne, 1843 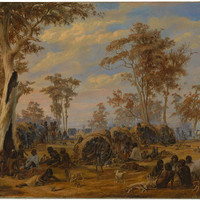 Alexander Schramm, 'Adelaide, a tribe of natives on the banks of the river Torrens' 1850 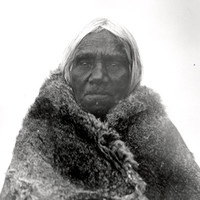 Courtesy South Australian Museum Archives. AA 124/5/3. Not to be reproduced without permission 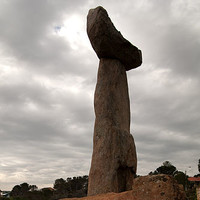 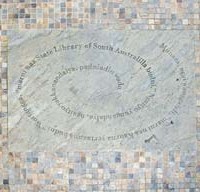 The Kaurna greeting message at the entrance to the State Library was prepared by Kaurna Elder Lewis Yerloburka O'Brien.

Courtesy of the State Library of South Australia. 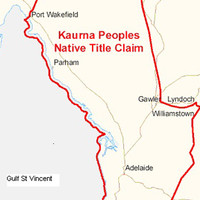 Thanks Kathleen, we'll add that to the links tab above.

Hi Deborah,
There are a number of different versions of maps but this one is fairly widely used - https://aiatsis.gov.au/explore/map-indigenous-australia

I am looking for a map that may somewhat distinguish the boundaries of Kaurna and Ngadjuri lands around the Clare Valley please.

Hi Rachel,
Perhaps ask at the Living Kaurna Cultural Centre and see if they can suggest some contacts for you - https://explore.history.sa.gov.au/organisation/living-kaurna-cultural-ce...

hello, would you know where I could find information on local knowledges. specifically looking for St Agnes area for Ardtornish Kindergarten

Hi Kelly, can you provide some context as to what tribe you believe are the original custodians of the Adelaide Plains?

As we have commented previously Kelly

Mandy and Uncle Lewis write in the article above "The last two decades of the twentieth century saw the re-emergence of a group of Aboriginal people who speak for the Adelaide Plains and identify as Kaurna."

We are acknowledging how decedents of various people from the Adelaide plains choose now to identify and describe their historical identity. As you yourself acknowledge it is a complex and difficult topic, and we choose to give authority to the voices to whom it means most, and who have been historically voiceless.

Gara, Tom, ‘The life of Ivaritji (‘Princess Amelia’) of the Adelaide tribe’ in Aboriginal Adelaide: Special Issue of the Journal of the Anthropological Society of South Australia, 28:1, 1990

Hemming, Steve, ‘‘Kaurna’ identity: a brief history’ in Aboriginal Adelaide: Special Issue of the Journal of the Anthropological Society of South Australia, 28:2, 1990

O’Brien, Lewis, ‘My Education’ in Aboriginal Adelaide: Special Issue of the Journal of the Anthropological Society of South Australia, 28:2, 1990