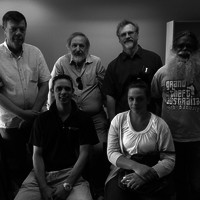 The Kaurna language (Kaurna Warra) is the original language of Adelaide and the Adelaide Plains, South Australia. It is one of the better documented languages of South Australia and has been undergoing a sustained revival since 1990. The area now known as Adelaide is at the heart of Kaurna country.

The name Kaurna is probably a misnomer deriving from kornar meaning ‘men; people’ in the neighbouring Ramindjeri and Ngarrindjeri languages. William Wyatt was the first to record the form Kaurna which he said was ‘Encounter Bay Bob’s Tribe’ as opposed to ‘Meeyurna: Onkaparinga Jack’s Tribe’. Miyurna, meaning ‘men; people’ in the Kaurna language, would be a more fitting name for the language and people of the Adelaide Plains. However, the name Kaurna is now well-established. Its continued use was endorsed at a meeting of Kaurna people in early 2013.

Historical sources of the Kaurna language

Kaurna was documented to varying extents by a range of observers in the nineteenth and early twentieth centuries. The earliest wordlist is that recorded by the Frenchman Joseph Paul Gaimard aboard the Astrolabe when the vessel called in to King George Sound in Western Australia (where Albany is today) in 1826, 10 years before the colony of South Australia was established. Gaimard knew that the language he was recording from an Aboriginal man known only as Harry and a woman known as Sally was from Gulf St Vincent. Gaimard recorded just 168 words and his list contains many errors and misunderstandings. Despite this, and the French-inspired spellings, it is easily recognisable as Kaurna.

By far the best records of the Kaurna language were made by two German missionaries, Christian Gottlob Teichelmann and Clamor Wilhelm Schürmann, sent to South Australia by the Dresden Mission Society. They arrived in Adelaide in October 1838. Their main sources were three prominent Kaurna Elders: Mullawirraburka (‘King John’), Kadlitpinna (‘Captain Jack’) and Ityamaiitpinna (‘King Rodney’). Between them, Teichelmann and Schürmann recorded a vocabulary of about 3000 words, a sketch grammar and many hundreds of phrase and sentence examples translated into English. They also recorded several traditional Kaurna songlines and short texts to illustrate dialect differences and translated six German hymns and the Ten Commandments. Schürmann opened a school for Kaurna children on 23 December 1839 which was handed over to a Dresden Mission Society colleague, Samuel Klose, in 1840. Several Kaurna letters and texts written by Ityamaii, Pitpauwe and Wailtyi, who were taught to read and write Kaurna, are preserved in the archives of the Franckische Stiftung in Halle, Germany.

Some other nineteenth-century observers who recorded Kaurna language were James Cronk, Walter Bromley, George Augustus Robinson, Hermann Koeler, Dr William Wyatt, William Williams, Louis Piesse and William Cawthorne. At least two observers, Edward Stephens and James Chittleborough, wrote up their knowledge of the Kaurna language on the basis of childhood memories, having learnt some Kaurna growing up with Kaurna children during their formative years.

Ivarityi (Amelia Savage) is recognised as the so-called ‘last speaker’ of the Kaurna language. Short wordlists from Ivarityi were recorded by Daisy Bates and John McConnell Black in 1919 and 1920 respectively. Ivarityi passed away in 1929 and the Kaurna language went into hibernation or fell asleep until the 1990s.

Kaurna language in the nineteenth century

At the time of colonisation Kaurna was a fully functioning language suited to talk about the environment of the Adelaide Plains and expressive of a rich and complex culture. A little of this complexity can be seen in the surviving record of the language. For instance, Kaurna had distinct terms for different species of kangaroos and for the male and female of these species:

Like other Aboriginal languages, Kaurna had an exceptionally rich inventory of kin terms. Though the documentation of the Kaurna kinship system is incomplete, glimpses of its beauty and complexity can be seen in the historical record. Kaurna had distinct terms for each of the four grandparents with reciprocal terms for grandchildren as follows:

There are also many bereavement terms akin to orphan, widow and widower in English, but for a wider array of kin. These are complemented by specific terms for deceased relatives, such as kutarri ‘late elder sister’.

Apart from a handful of simple sentences recorded by Black in 1920, Teichelmann and Schürmann were the only ones to record aspects of Kaurna grammar. They wrote a 24-page sketch grammar and some additional aspects of Kaurna grammar are exemplified in their hundreds of phrase and sentence examples. Kaurna has a well-developed case system, and is fairly typical of the wider Pama-Nyungan language group of which it is a member. Unlike many Aboriginal languages, it has dual and plural suffixes on nouns in addition to singular, dual and plural pronouns.

A sustained revival of the Kaurna language, based primarily on the records compiled by Teichelmann and Schürmann, began in 1989–90 with the writing of several Kaurna songs. These were the first novel sentences written and sung in Kaurna, at least since Ivarityi died 60 years previously, though the Kaurna language was probably last spoken on an everyday basis in the early 1860s. Some years prior to this, Kaurna people had begun to turn to the archival records of the Kaurna language in search of names. Warriappendi Alternative School was named by Auntie Leila Rankine in 1980. Kaurna naming activity has vastly increased since then. By 2012 there were an estimated 1000 entities bearing Kaurna names bestowed since 1980. These entities range from names for people and pets to organisations, buildings, rooms, programs, parks and reserves, walking trails, an allele (a hereditary gene or chromosome), brand names, and Adelaide’s Kari Munaintya tram and Tindo solar bus.

The Kaurna language has undergone a remarkable recovery. Kaurna was introduced as the language program at Kaurna Plains School in 1992 and in a senior secondary program at Elizabeth City High School and Elizabeth West Adult Campus in 1994. Since then it has been taught in several schools. A Kaurna linguistics course was introduced at the University of Adelaide in 1997. Kaurna is now taught at all levels of education. An estimated 10 000 students of all ages have had some exposure to the language since 1980.

Kaurna is coming to serve the function of an auxiliary language, primarily for use in the public arena, although it is also beginning to be spoken in some Kaurna homes. Kaurna speeches of welcome and acknowledgement are now commonplace at public events. It is used to introduce cultural performances by the Paitya, Taikurtinna and Kuma Kaaru dance troupes led by Karl Winda Telfer, Steve Gadlabardi Goldsmith and Jack Kanya Buckskin respectively. The Kaurna Plains School choir often sings Kaurna songs in public and Kaurna songs have also featured in the South Australian Public Schools Choirs performances.

Kaurna language and language resources continue to develop. Special attention has been given to developing a Kaurna base-10 number system capable of counting into the millions, developing sports terminology and Kaurna funeral protocols. Many songs and some storybooks have been written and published.

There is a high demand for teachers of Kaurna from schools in the Adelaide metropolitan area (Kaurna country). In order to address this demand, courses at Technical and Further Education Colleges have been developed by Dr Mary-Anne Gale. In April 2013 nine Kaurna people completed their TAFE Certificate III ‘Learning an Endangered Aboriginal Language (Kaurna)’ and several are -undertaking the TAFE Certificate IV course ‘Teaching an Endangered Aboriginal Language (Kaurna)’.

Until 2010 all Kaurna language materials and all programs in schools employed Teichelmann’s and Schürmann’s spellings. These spellings are not ideal. Teichelmann and Schürmann did not make adequate distinctions between the three r-sounds in Kaurna (they wrote wiri ‘shoulder blade’ and wirri ‘club’ in the same way – wirri; karrku ‘red ochre’ and karku ‘sheoak tree’ both as karko). Nor did they adequately distinguish between interdental, alveolar and retroflex sounds or short and long vowels.

In 2010 a revised spelling system, more in line with the sound system of the Kaurna language, was adopted and endorsed by  Kaurna Warra Pintyanthi. Kulurdu Marni Ngathaitya!(Sounds good to me!), a Kaurna learner’s guide, and the revised Kaurna Alphabet Book which were published in late 2013, together with the forthcoming Kaurna dictionary are the main resources through which the revised Kaurna spellings are being introduced.

The Kaurna Warra Pintyanthi (‘creating Kaurna language’) committee grew out of a series of Kaurna language development workshops that were held in 2000 and 2002. Kaurna Elders Dr Lewis Yerloburka O’Brien and Dr Alitya Wallara Rigney are signatories for the group, convened by Dr Rob Amery at the University of Adelaide. The success of Kaurna Warra Pintyanthi is based on a long-standing partnership between Kaurna people spanning several generations and linguists, teachers, historians, musicologists and other researchers. The committee promotes the Kaurna language, undertakes research into Kaurna placenames and implements a range of projects to develop and expand the language. It consider requests for Kaurna names, translations and information related specifically to the language itself. 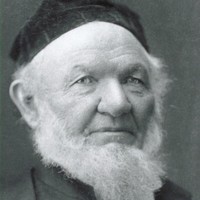 Courtesy of the Lutheran Archives, Adelaide. 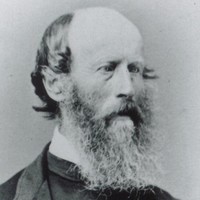 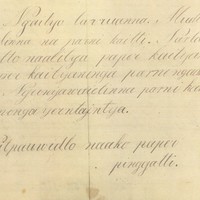 Letter written to Germany by Pitpauwe, a 12 or 13 year old Kaurna boy at the Native School run by Samuel Klose, 1843. 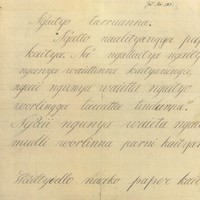 Letter written to Germany by Wailtyi, a 12 or 13 year old Kaurna boy at the Native School run by Samuel Klose, 1843. 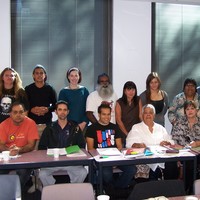 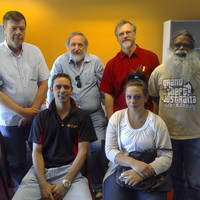 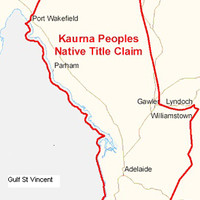 Teichelmann, CG & CW Schürmann, Outlines of a grammar, vocabulary, and phraseology, of the Aboriginal language of South Australia, spoken by the natives in and for some distance around Adelaide (Adelaide. The authors, 1840).