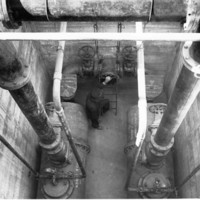 In 1877 Adelaide had 7000 cess pits underneath the city, and raw sewage was flushed daily into the River Torrens.  Torrens water was used for everything from washing to drinking and cooking.  This poor sanitation meant that the city’s death rate from epidemic diseases was 24.1 per thousand people, almost double the state average of 12.8 deaths per thousand.

The Adelaide Council invited William Clark, a hydraulic engineer who designed a sewerage system for Calcutta, to develop a ‘deep sewerage’ system for the city and environs.  Not only was there increasing amounts of household waste to deal with, industrial waste and wool washing in Thebarton and Hindmarsh were of concern, particularly during the hot summer months.

Clark proposed the creation of a sewerage farm to process the estimated 42 ounces of waste produced by each resident of Adelaide per day.  In 1879 the Act for the Better Sewerage and Cleansing of Adelaide and Suburbs Thereof was passed.  A sewerage farm was built at Tam O’Shanter Belt, north of the city.  This area of land is located between Days Road and Churchill Road, where Sunnybrae Farm and the Islington train yards are today.  The underground drainage system was completed in 1881, and by 1885 the farm was processing almost two million gallons of effluent a day.

The introduction of water-borne sewerage was a major step in developing modern methods of sanitation and waste disposal in urban areas.  With developments in science and germ theory, and new movements for public health, there was a greater recognition and concern for the physical conditions of sanitation in the city. 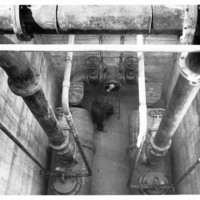 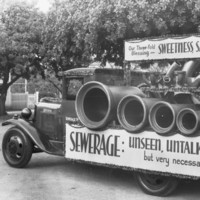 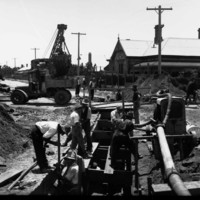 Gibbs, RM, A History of South Australia: from colonial days to the present, (Adelaide: Peacock Publications for Southern Heritage, 1984)