The South Australian Branch of the Royal Geographical Society of Australasia was established in 1885.
1935

The Pioneers’ Association of South Australia was a descendants’ group dedicated to British settlers.
1935

In 1935 some of the approximately ten per cent of the population who were of German descent formed the German Australian Centenary Committee to preserve the German inheritance. Their timing could hardly have been worse, and the society disbanded after the outbreak of World War II when two of the founders were interned.
1955

Founded in 1955, and would later assume the mantle from the Royal Geographical Society.
1974

Founded in 1974, becoming the first state-wide historical organisation established without a substantial representation of Adelaide’s social elite, and with a prominent academic presence.

With no convicts and few Irish settlers to sow the seeds of nationalism, South Australians more than other Australians looked to an idealised ‘home’ in Britain. While statewide historical societies formed in New South Wales in 1901, Victoria in 1909, Queensland in 1913 and Western Australia in 1926, South Australians lagged in founding societies to commemorate their own history.

This did not mean that all ignored their past. Several founders of the Royal Geographical Society of Australasia, South Australian Branch (1885), hoped that the society would devote much attention to the recording of history, and through their efforts the society fulfilled some functions of a state historical society.

Early settlers, including the Ayers and Bagot families, John Barton Hack, and explorers such as Charles Sturt and John McDouall Stuart, were venerated; thus it is not surprising that the first history-based societies in South Australia commemorated their deeds. In 1935 some of the approximately ten per cent of the population who were of German descent formed the German Australian Centenary Committee to preserve the German inheritance. Their timing could hardly have been worse, and the society disbanded after the outbreak of World War II when two of the founders were interned.

During the 1960s and early 1970s some residents in local government districts, first in rural areas and then in metropolitan Adelaide, formed historical societies to record the history of their area. Prompted by changing technology, enthusiasts also initiated societies dedicated to preserving outmoded forms of transport and sought to protect and record the history of their workplaces. At the same time rural and urban South Australians were establishing local historical museums and calling for the preservation of early buildings.

The Historical Society of South Australia

Until the late 1960s a relatively small and socially select body of South Australians controlled the memorialisation of the state’s past. But then attitudes changed. In country districts members of National Trust branches and historical societies began to examine the lives of their own ancestors, thus democratising the presentation of the past. Within the metropolitan area, as a result of increasing industrialisation and more diverse immigration, the old Adelaide families were losing their former ascendancy. During Don Dunstan’s Labor premiership Adelaide metamorphosed into a much more cosmopolitan society. This shift in the social composition of the city and in the attitudes of its inhabitants flowed on to the history movement. Some academics and others, dissatisfied with the history perpetuated by the National Trust, were dismayed that South Australia was the only state without a state historical society. The Historical Society of South Australia, founded in 1974, became the first state-wide historical organisation established without a substantial representation of Adelaide’s social elite, and with a prominent academic presence.

Histories in the Late Twentieth Century

In the 1980s commemorative events such as local anniversaries, the state’s sesquicentenary and Australia’s bicentenary prompted a rapid increase in the publishing of local and institutional histories. The introduction of computers and new printing technology also enabled ordinary people to publish histories of their families. South Australia now has approximately 130 historical societies, with memberships ranging from several thousand in the National Trust to a mere handful in some rural groups. 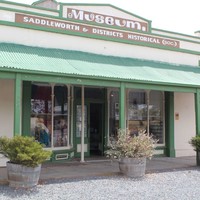 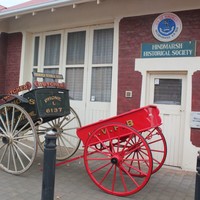 Wallaroo has had the shelter shed removed from the beach this week it has been there since 1930 where has it fine the environmentalist are doing work on the beach and have removed this WHY it has stood the test if time and is used constantly by the public how can they do this !!!!

Round, Kerrie, 'Celebrating the past: the growth of amateur history in South Australia' (PhD, University of Adelaide, 1995)