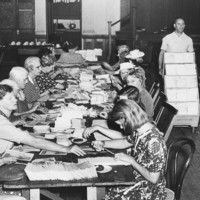 The first South Australian elections allowed men of property to elect from among themselves councillors to advise the governor.
1910

Consolidation of the Party System

After the consolidation of the party system, most candidates were backed by one of the two major political parties.
1942

South Australia was the last state to take this step.

Elections to select members of parliament or local councillors are an important part of the democratic system. Who is allowed to vote is determined by the franchise, and who may stand for election by other provisions of electoral law. The first South Australian elections in 1851 allowed men of property to elect from among themselves councillors to advise the governor. With the achievement of self-government in 1856, elections took on greater significance for ordinary people, as most men became eligible to vote in elections for the House of Assembly. Some women began to vote in municipal elections from 1861.

Early election campaigns could be robust affairs, causing and reinforcing perceptions that politics was a public, masculine realm. Campaigning, especially in country areas, often included outdoor meetings, where the candidate would address the crowd. The upstairs verandah of a corner pub was a favoured venue, although the tray of a cart or motor vehicle made for a quick getaway in the event of an unfriendly reception. The hiring of the local town hall or similar indoor venue was common, a cause for gratification when filled with supporters but a graphic illustration of apathy or poor planning if only a handful turned up.

Daily papers reported parliamentary speeches, allowing voters to judge the performance of sitting members, while closer to the event, most state and local newspapers sent staff to cover public meetings at which hopeful contenders made their pitch. Candidates with sufficient personal resources and/or party backing could also deluge their electorate with leaflets and posters and place advertisements in local newspapers. Endorsed Labor candidates could usually rely on the help of trade union officials and interested members, whereas anti-socialist candidates similarly gained assistance from the business community.

After the consolidation of the party system around 1910, most candidates were backed by one of the two major political parties, but independents and minor party candidates never disappeared entirely. In times of stress, like the Great Depression and the 1970s, breakaways occurred, and splinter parties sprang briefly into existence. As state administrations continue to grapple with the aftermath of the State Bank disaster and with the impact of globalisation on our small regional economy, a disillusioned public is again turning to alternative candidates. Elected members who leave their parties often sit out their term of office as independents, but true independents and minor party candidates have found it easier since the mid 1970s to get elected to the Legislative Council via proportional representation.

Elections During the Last 100 Years

During the long premiership of Tom Playford, elections were little more than formalities. When the Liberal and Country League was formed in 1932, single-member seats replaced the former multi-member ones, and the rural area was given twice as many seats as the burgeoning metropolitan area. Over almost three decades, it was impossible for Labor to win a majority of seats, despite on several occasions having more primary votes and a greater share of the two-party preferred vote. The proportion of enrolled electors voting fell so low that compulsion was finally introduced in 1942, South Australia being the last state to take this step. The gross weighting of the rural vote, the ‘Playmander’, was ended only in 1968 when Liberal premier Steele Hall, realising that it could not be justified on either moral or practical grounds, began democratic changes. Don Dunstan completed the process, ending also the restricted Legislative Council franchise.

Following a bipartisan referendum in 1990, South Australian electoral commissioners are required to redraw electorate boundaries after each election in such a manner that the major party with the majority of the two‑party preferred vote also wins enough seats to form government. This has proved problematic in concept and practice, and no other state has emulated this attempt to ensure that a major party is not ‘cheated’ of victory. Some breathing space was recently afforded when the Electoral (Miscellaneous) Amendment Act 2009 extended the period after each election in which the boundary commission must begin the re-drawing exercise from three months to 24 months. Labor has been particularly adept at concentrating its efforts in marginal seats to win a majority of seats, if not votes, as happened not only in 1989, but also in 2002 and 2010.

Like several other states, SA now has a fixed electoral calendar, with four-yearly polls set to occur on the third Saturday of March. This significant change was achieved without fanfare via opposition Labor backbencher Kris Hanna’s private member’s bill, the Constitution (Parliamentary Terms) Amendment Act 2001, his initial attempt in 1999 having just failed to get the necessary constitutional majority. The first election held under the new regime was that of 20 March 2006.

Notable past elections include 1938, when a record 13 independents were elected; 1968, when Steele Hall’s win with only 44% of the primary vote to Labor’s 52% triggered electoral reform; 1979, when Dunstan’s successor, Des Corcoran, called an early poll and unexpectedly lost, and 1993, when Labor was punished for the State Bank catastrophe by being reduced to 10 Assembly seats. 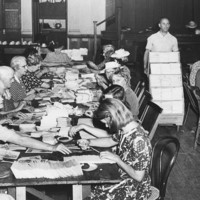 Image courtesy of the State Library of South Australia, SLSA: B 54253, Public Domain 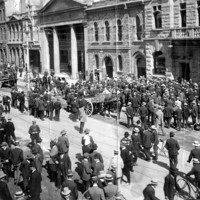 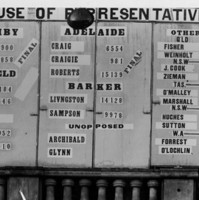 Atkinson, A and B, Fraser, The Macquarie Encyclopaedia of Australian Events (Sydney: Macquarie Library, 1997)