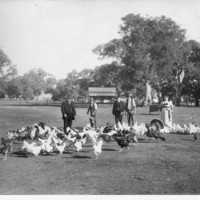 Closer settlement is a policy of settling land closely, so that in a normal season a holding is just large enough to support a family comfortably. The policy assumes that small holdings, whether held by individuals or cooperatives, realise the land’s full potential, usually via agriculture, and that people can easily come together to support markets, schools, churches and other civilised amenities.

The policy paces the length of South Australia’s non-Aboriginal occupation. It stemmed both from a European belief that using land intensively maximised its value and civilised its occupants, and from a democratic conviction that South Australia was a colony of opportunity, where holdings should be small to allow as many as possible access to land. It argued that Aboriginal peoples could justly be deprived of their land because they did not use it, that agriculture should supplant pastoralism because it used land more fully, and that small holdings supported a more populous, more civilised and more democratic society, with its wealth more equally distributed.

In the colony’s early decades most land fell under the control of large pastoralists, because land alienation practices gave them advantages over small holders, and because isolation and a small population made pastoralism more profitable than agriculture. But the closer settlement ideal was fixed, and South Australia’s grain fields had a unique advantage – they were close to the coast, so their grain could be shipped more cheaply than from anywhere else in Australia. In the 1850s grain production expanded rapidly to meet goldfields’ demand, and by 1865 South Australia was Australia’s largest grain producer. Small holders demanded land.

In January 1869 parliament passed the Waste Lands Amendment Act (the ‘Strangways Act’). This introduced credit agreement, which allowed individuals to select up to 260ha on generous time payment, provided that they occupied and developed their holdings. Credit agreement engendered bitter struggles between large and small holders for control of the land, and after 1869 parliament intervened many times to break up large holdings in support of closer settlement. These interventions included the closer settlement Acts of the 1880s, soldier and war service settlement legislation, and rural assistance schemes from the 1950s.

But much South Australian land resisted closer settlement. In the 1870s optimistic selectors carried credit agreement over Goyder’s Line into the dry north: the 1880s droughts broke them. Even in well-watered country, poor seasons could ruin small holders because optimistic closer-settlement advocates, wanting for democratic reasons to put as many as possible on the land, made blocks too small. Farmers had to aggregate by buying up neighbours, or risk ruin – they had to get big or get out. Successive parliaments saw the problem, and for over a century progressively relaxed the conditions of closer settlement, but during that time farm costs grew faster than farm returns, necessitating larger and larger minimum holdings to be viable. A pattern emerged whereby in pursuit of democratic land settlement parliament broke up large holdings; the new farms proved too small to be viable and so were aggregated; parliament broke up the aggregations; and so on. The intractability of South Australian land and the movement of costs against primary production means that today closer settlement is advocated much less ardently than formerly. 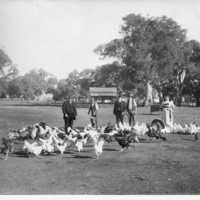 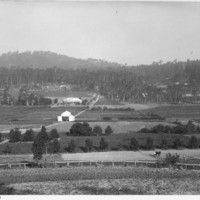