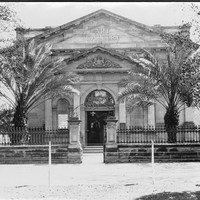 The first exhibition of the National Art Gallery of SA opens in two rooms of the present Mortlock wing of the State Library of South Australia. 94,000 visitors attend the exhibition.
1897

Sir Thomas Elder bequeaths £25,000 to the art gallery in South Australia for the sole purpose of buying pictures
1940

Separation of gallery from public library and museum

The Art Gallery of South Australia

On 18 June 1881 the National Art Gallery of South Australia opened in two rooms of the present Mortlock wing of the State Library of South Australia. Most works on display were acquired through the government grant, but Queen Victoria, the Prince of Wales, the British government and individual South Australians loaned pictures as well. South Australians responded enthusiastically, with 94,000 visitors attending the exhibition. In 1889 the gallery moved further east along North Terrace to the Jubilee Exhibition Building and then to its present site and a specially designed building (now the Elder Wing) in 1900. Major extensions in 1936, 1962, 1979 and 1996 have expanded the gallery’s display, administrative and ancillary facilities. In 1940 an act of parliament separated the gallery from the public library and museum, established its own board and changed its name to the Art Gallery of South Australia.

In 1897, in the first major endowment of any Australian gallery, Sir Thomas Elder bequeathed £25,000 to the art gallery for the sole purpose of buying pictures. The gallery has subsequently benefited from substantial bequests and donations; nearly 90 per cent of its diverse collections of Australian, European and Asian art was acquired through private gifts and funding. The gallery houses an outstanding collection of Australian art, particularly of the colonial period. It has one of the finest collections of British art outside Britain and special strengths in South-East Asian ceramics, Indian and Indonesian textiles and Japanese decorative arts. Touring exhibitions have always been popular, one of the most spectacular being in 1906, when 18,168 visitors crammed through the gallery in less than two weeks to see Holman Hunt’s The Light of the World. Today the gallery has a high reputation for initiating and touring exhibitions through Australia.

Australia’s first non-metropolitan gallery was the Port Adelaide Art Gallery and Museum, which operated between 1872 and 1932. Since 1995 the South Australian Country Arts Trust has managed a gallery in Port Adelaide and assists with funding and touring exhibitions to 17 regional galleries. The three South Australian universities maintain public art museums, and there are public galleries at Carrick Hill and the Adelaide Festival Centre. The Contemporary Art Society, a splinter group of the Royal South Australian Society of Arts, has operated a gallery since 1963, and the Experimental Art Foundation’s program of exhibitions dates from 1975.

This is a revised version of an entry first published in The Wakefield Companion to South Australian History, edited by Wilfrid Prest, Kerrie Round and Carol Fort (Adelaide: Wakefield Press, 2001). Edited lightly. Uploaded 26 August 2015. 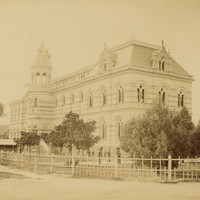 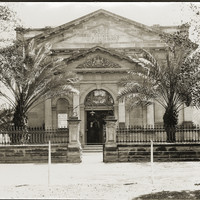 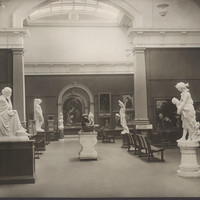 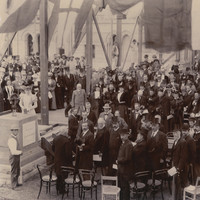 Benko, Nancy, Art and Artists of South Australia (Adelaide: Published under the patronage of the Lidums family, 1969)

Maas, Jeremy, Holman Hunt and The Light of the World (London: Scolar Press, 1984)

Report of the Arts Enquiry Committee for South Australia (Adelaide, 1961)