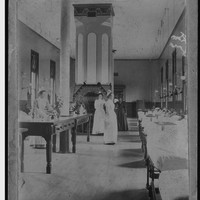 On 8 April 1896, 17 members of the Adelaide Hospital’s honorary staff resigned in protest against the actions and composition of the hospital’s board of management. A dispute had arisen in 1894 over a senior nursing appointment, which is traditionally known as the ‘Hospital Row’. It involved Premier Charles Cameron Kingston, who had appointed the board. Kingston enlivened negotiations by describing the university’s board representative, EW Way, as a medical Jack-the-Ripper.

Confronted with what was essentially a medical strike, Kingston recruited ‘scabs’, of whom the most distinguished were Leith Napier and Ramsay Smith. Hospital services were maintained, though with much acrimony, but clinical teaching largely ceased and some 50 medical students went elsewhere to complete their fourth and fifth years.

By the time Kingston’s government fell in 1899 the nursing dispute had been decided, leaving only the issue of medical teaching to be resolved. Thanks to the intervention of the diplomatic William Mitchell, professor of philosophy, this matter was settled on the university’s terms, and teaching resumed in 1902. 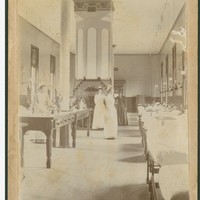 Image courtesy of the State Library of South Australia, SLSA: B 24982, Public Domain. 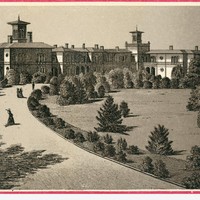 Image courtesy of the State Library of South Australia, SLSA: B 45277/13, Public Domain

Associated with:
North Terrace East
The University of Adelaide